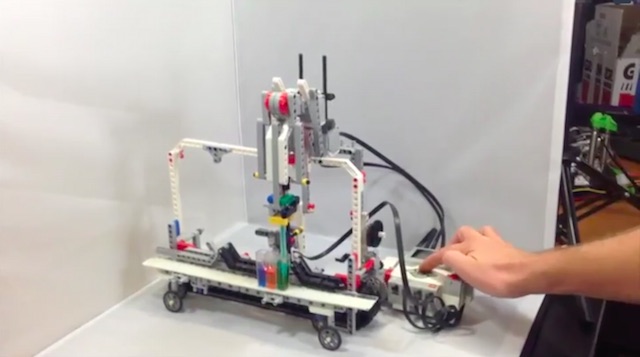 Stanford University scientists have designed and developed robotics kits that work with certain Lego sets. When put together, the Lego set automates a mini chemistry lab, complete with robots assisting their kid scientists. The homemade robotics works with the Lego Mindstorms EV3 set, and the results are fun enough to make even adults want to try their hand at these cool constructions.

The robots are configured to do an assortment of simple tasks, from holding beakers and vials for their scientist to measuring out the liquids needed for experiments. Scientists created the robots using inexpensive syringes and the aforementioned Lego kit. The robots can even squeeze measured liquids from pipettes for those especially tricky experiments. With the right programming, delicate moves and work can be achieved by robots — using a toy most people played with as a child.

“Learning should be playful. And maybe it’s more fun to engage in chemistry or biology experiments if you do it with a playful robot.”

One of the best aspects of the wet-lab robots is their versatility; the sets were tested on age groups ranging from middle school all the way up to high school, and the results were almost uniformly successful. Students as young as 10 were capable of creating simple robots with the Lego set, while those in high school created far more complex and intricate designs. But one thing is certain: every group involved in the project had a lot of fun, and left with a deeper interest in science than ever before.