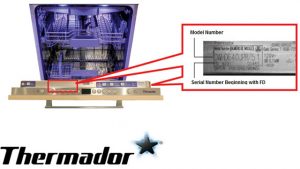 BSH Home Appliances Corporation expands recall involving dishwasher models that are not included in the previous recall. The power cord can overheat, posing a fire hazard.

This recall expansion involves power cords supplied with certain Bosch®, Thermador®, Gaggenau®, Kenmore®, and Jenn-Air® brand dishwashers that were manufactured from September 2012 through January 2015. Model and serial numbers are printed inside the dishwasher either on the top of the dishwasher inner door panel or on the right side of the dishwasher panel. The dishwashers are cUL certified with file number E103022.

The affected products were sold from January 2013 to May 2015 in Canada at appliance and specialty retailers, department stores, authorized builder distributors, home improvement stores nationwide as well as online.

Consumers should immediately stop using the dishwasher and contact the Safety Recall Hotline for a free inspection and repair.