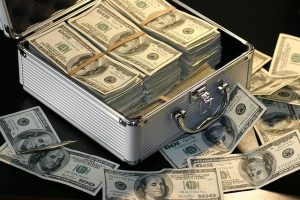 Image by S K from Pixabay

In an unprecedented move, Broadcom Ltd. has offered around $105 billion to purchase Qualcomm Inc. This would be the biggest technology takeover ever, and could have massive implications for the electronics industry as a whole. The offer was made on November 6. The question now becomes: how will Qualcomm respond?

Broadcom’s proposal offers $70 a share in cash and stock for Qualcomm. The offer comes out to a value of roughly $130 billion on a pro forma basis, with $25 billion in bet debt. Broadcom’s proposal is a 28% premium over Qualcomm’s closing stock price as of November 2.

Should Qualcomm agree, this would be the largest technology deal in history. It would easily surpass the previous holder of the title, Dell Inc.’s $67 billion purchase of EMC back in 2015.

That’s a huge investment, but potentially a bonanza for Broadcom. Purchasing Qualcomm would turn the company into the world’s third-largest mobile phone chipmaker. Only Intel Corp. and Samsung Electronics Co. would surpass it.

All that aside, there’s no guarantee that Qualcomm will agree to the offer. In fact, according to Bloomberg News, the company is preparing to reject the offer. There are a few reasons behind this decision. First of all, the offer by Broadcom was entirely unsolicited. Second and perhaps most importantly, Qualcomm reportedly believes that the price tag attached to the company dramatically undervalues it as a whole. According to reports, Qualcomm will be recommending to shareholders that they reject the offer.

That being said, Qualcomm is not necessarily in a place to reject Broadcom’s proposal. The most profitable unit, which licenses mobile phone technology, has had to contend with a variety of international regulatory actions. As if that wasn’t enough to contend with, the company has also faced a legal challenge from Apple that could lead to the company no longer purchasing Qualcomm chips. This would be an enormous blow to Qualcomm’s profitability — one that Broadcom is all too eager to take advantage of.

The decision to sell to Broadcom would obviously impact the other major electronics companies; but until Qualcomm offers a response to the offer, everything is purely conjecture. Should the deal go down, it will make history in more ways than one.