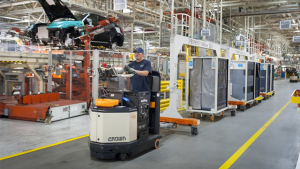 Proving that one person’s trash can truly be a treasure, a BMW plant in South Carolina recently used the natural gas emitted by rotting trash to power its forklifts. This was possible because when organic material decomposes in landfills, it releases the greenhouse gas methane (CH4). BMW has taken advantage of this since 2003, by pumping gas from a nearby landfill into turbine generators that provide half the power needed for its plant operations. This saves the company about $5 million in energy costs each year. Taking it a step further, BMW recently joined the U.S. Department of Energy’s Office of Energy Efficiency and Renewable Energy (EERE) and other industry partners to demonstrate that garbage byproducts can be turned into hydrogen for fuel cells, which are an energy efficient source of power with zero emissions.

For the project, EERE and BMW developed and tested multiple tanks with catalysts for removing contaminants, purging the gas stream of all other molecules to isolate hydrogen that is clean enough to be used in fuel cells. The Greer, South Carolina BMW plant already uses more than 300 fuel cell powered forklifts for daily operations, which include manufacturing 300,000 cars each year. Now the project team has proved that converting landfill gas to hydrogen to power the forklifts is good for the company’s bottom line.

Not only are fuel cells better for the environment than traditional vehicle fuel, but they also have practical advantages over the lead-acid batteries that are typically used in forklifts. They can be refueled in less than three minutes, which is faster, less labor intensive, and takes up much less space than changing or recharging batteries. Another problem with batteries is they get less powerful near the end of their lives. Fuel cells, on the other hand, provide consistent power until they run out of hydrogen. Furthermore, recharging batteries requires quite a bit of electricity, and switching to fuel cell forklifts has saved BMW 1.8 million kilowatt hours of electricity consumption per year.

The South Carolina factory is already home to the largest fuel cell powered forklift fleet in the world, with more than 300 units. It will need even more power next year, since BMW recently announced a $1 billion expansion plan that will make it the company’s largest plant in the world.