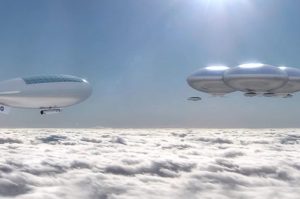 A multi-phase campaign referred to as the High Altitude Venus Operational Concept, or HAVOC, is a collaborative effort between engineers and scientists at the Systems Analysis and Concepts Directorate at NASA’s Langley Research Center. The conceptual program consists of a series of missions to Venus kicking off by sending a robotic version into space followed by a 30-day manned orbital mission.

Astronauts would travel inside a solar-powered airship via an aeroshell that enters the atmosphere at 4,500 mph and during the deceleration process the shell would fall away revealing the folded airship. This folded airship would then deploy robotic arms to unfurl the blimp to be inflated with helium, allowing the airship to float 30 miles above the surface of Venus. NASA does not have plans to fund this concept however the Langley-based team will continue to explore the possibility of such missions to Venus using these conceptual ideas.