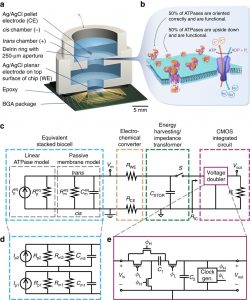 Researchers at Columbia University have built a biologically-powered chip. More specifically, this ground-breaking integrated circuit uses adenosine triphosphate (ATP), an energy-bearing molecule that is found in all living cells. ATP is the biochemical way that bodies breakdown food and turn it into energy. In biological terms, ATP has been described as functioning like a rechargeable battery for living things, but this is the first time that it has been harnessed to power a chip. While the research is early, this breakthrough could lead to a new class of artificial systems that combine both biological and solid-state components, such as a chip that has the ability to taste and smell.

The researchers built the unique chip by integrating a conventional solid-state complementary metal-oxide-semiconductor (CMOS) integrated circuit with ATP. “In combining a biological electronic device with CMOS, we will be able to create new systems not possible with either technology alone,” says  Ken Shepard, who led the study at Columbia Engineering. “We are excited at the prospect of expanding the palette of active devices that will have new functions, such as harvesting energy from ATP, as was done here, or recognizing specific molecules, giving chips the potential to taste and smell. This was quite a unique new direction for us and it has great potential to give solid-state systems new capabilities with biological components.”

A paper describing the study in detail published in an open access paper in Nature Communications on December 7, 2015.