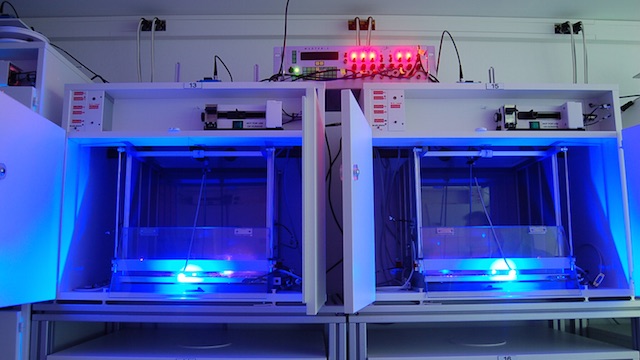 Bioengineers at Rice University have created a new version of an optogenetic platform that allows them to study two biological circuits at a time. They call these tools, which are used for synthetic biology, a “biofunction generator” and a “biscilloscope.” This technology uses light to activate, and simplifies the process of studying complex synthetic biology.

The optogenetic platform operates using a variety of colored lights and engineered bacteria to decipher the often convoluted and confusing world of genetic circuitry design.

“Unfortunately, all biological light sensors are ‘sloppy,’ in that they tend to respond to multiple colors of light. We’ve developed a detailed mathematical model to capture this sloppiness and design multicolor light signals that compensate for it so that two light sensors can be independently controlled in the same cell. Because most of the circuits that control biological behaviors are composed of two or more genes, this technology will make it easier for our lab and others to study complex synthetic biological systems.”

Jeffrey Tabor, an associate professor of bioengineering at Rice

The DNA-based circuits that make up life are very similar to those in most of the technology they use. The big difference is the information that moves between them: in our devices it’s voltage, in genetic circuits it’s protein production. The technology made by the bioengineers emphasizes how closely linked these technologies really are.

The devices used to measure and analyze electronic circuits and their output has simply been altered to work for genetic circuits. Perhaps most remarkably, the devices engineered by the scientists are capable of actually turning genes off and on, much like their electronic counterparts.

The research is still ongoing, but the connection between humanity and technology may be closer than we ever imagined — and the implications of this work could be more far-reaching than we ever anticipated.