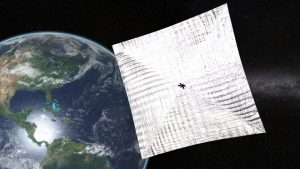 Bill Nye–CEO of the Planetary Society, and best known as “the Science Guy”–wants you to help him create a solar sailing spacecraft. A week ago he launched a Kickstarter campaign to fund LightSail, a small satellite that will sail through space using energy from beams of light. It is a CubeSat, which is a standardized type of nanosatellite that hitches a ride with rockets carrying bigger payloads on previously planned missions. In this case, three small cubes are stacked together and integrated with Mylar sails that are 4.5 microns thick, which is just one-fourth the thickness of an average trash bag. The entire unit is about the size of a loaf of bread.

The prototype launched today from Cape Canaveral into low-Earth orbit, where it will be tested. In this first mission, the prototype won’t fly high enough for solar sailing, but the sail deployment sequence will be tested. First, an antenna should deploy, then the solar arrays will swing open, and finally four metal booms will slowly unwind, unfolding Mylar sails that will stretch 344 square feet.

In 2016, a final version of LightSail will be lifted into orbit by Falcon Heavy, a new rocket built by SpaceX. The satellite will be released into an orbit 450 miles above earth and the sails will unfurl. As the sun’s light is reflected, tiny particles called photons will bounce off the shiny sails. Their momentum will be transferred, pushing on the sails and propelling the satellite forward with a small, continuous acceleration. Meanwhile, electromagnetic torque rods will interact with Earth’s magnetic field to orient the spacecraft and ground-based lasers will measure the effect of sunlight on the sails.

LightSail was created by the Planetary Society, a nongovernmental organization that was founded in 1980 by Carl Sagan, who actually demonstrated a model of a solar sail on the Tonight Show back in the 70s. The society’s CEO Bill Nye has called LightSail “the people’s spacecraft,” because its funding is crowd-sourced, rather than being backed by government money. The total cost for the program is estimated at $5.45 million, and the Planetary Society raised most of the money over the last three years. Last week Bill Nye launched a Kickstarter campaign to raise some of the $1.25 million that is still needed. With a month left,  several goals have already been exceeded, with 11,486 backers already pledging more than $600,000 to make solar space sailing a reality.