Say goodbye to chargers and batteries for good. Researchers at the University of Washington have created a cellphone that doesn’t require any batteries. The new phone relies on ambient radio signals or light to stay charged and fully functional. This is a huge breakthrough in charging technology, and a major step forward from the methods we currently use to keep our devices working.

“We’ve built what we believe is the first functioning cellphone that consumes almost zero power. To achieve the really, really low power consumption that you need to run a phone by harvesting energy from the environment, we had to fundamentally rethink how these devices are designed.”

co-author Shyam Gollakota, an associate professor in the Paul G. Allen School of Computer Science & Engineering at the University of Washington

In order to demonstrate their invention, the researchers made several Skype calls with the battery-free phone. The device is made entirely of commercial, off-the-shelf components, and performed perfectly in all demonstrations.

The secret to their battery-free success came about by changing the way their phone receives information. Most phones convert analog signals into digital data. This step requires an enormous amount of energy; therefore, it was removed from the process. The battery-free phone instead uses the tiny vibrations that occur when someone is talking or listening on the phone. Researchers created an antenna that takes those vibrations and transforms them into standard analog radio signals. The end result is a new way to encode speech patterns for radio signals — and one that requires almost no power. 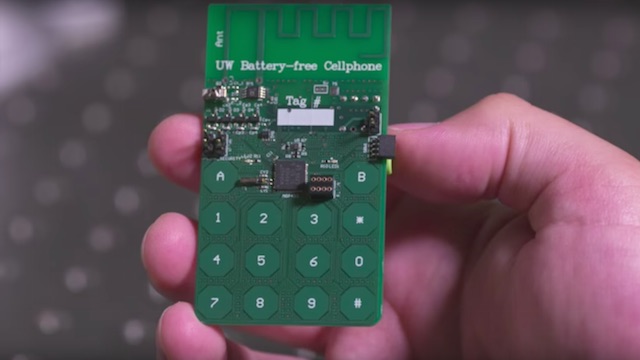 So how does this battery-free phone stay powered and functional? By using power from ambient light with an incredibly small solar cell. Using a cell approximately the size of a single grain of rice, the researchers were able to communicate with a base station 50 feet away.

The next step for the research team is improving the design they’ve already completed. They’ll work on increasing the operating range of the battery-free phone, as well as work out a way to encrypt phone conversations and keep them secure. Additionally, the researchers want to give the battery-free phone the power to stream videos. This is all well in the future, but for now the team is confident that battery-free phones are the next major step forward in communication.

For more information, you can check out the site here.