Battery Components Made of Packing Peanuts 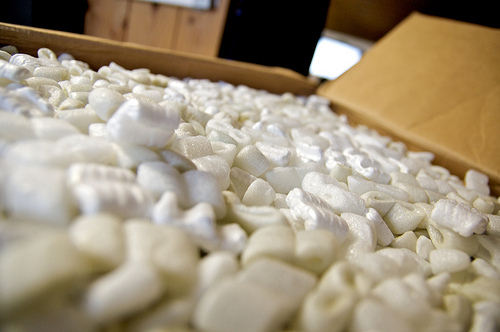 Engineering inspiration can strike when you least expect it. When researchers at Purdue University moved to a new lab, they decided to do something useful with the leftover packing peanuts. By heating the packing peanuts, they were able to convert them into high-performing battery components. They have since filed a related patent and demonstrated their findings at the 249th American Chemical Society National Meeting last week.

The properties that make packing peanuts so good for packing also makes peanuts difficult to recycle—they require large containers for transporting small amounts to recycling centers, which is expensive and inefficient. Therefore, 90 percent of packing peanuts end up in landfills, where they sit for decades, which is especially concerning because they contain hazardous chemicals that can contaminate ground water. The Purdue team has not only found a way to reuse the troublesome peanuts, but they have actually “upcycled,” by finding an ecofriendly second use that is arguably more valuable than the originally intended purpose of protecting fragile items. The researchers manufactured carbon-nanoparticle and microsheet anodes from polystyrene and starch-based packing peanuts, respectively. The anodes made of the new components have stronger electrochemical properties than commercial carbon anodes in lithium and sodium ion batteries, and they even outperform the theoretical capacity of graphite. The team attributes the superior performance to the disordered nature and porous microstructure of the carbon electrodes.

The environmentally-friendly battery components were created by heating the peanuts between 500 and 900 degrees Celsius in a furnace under inert atmosphere “in the presence or absence of a transition metal salt catalyst,” according to the Purdue team. The thin and porous sheets allow better contact with the liquid electrolyte in batteries. In fact, compared to commercial anodes, they are ten times thinner, with higher electrical resistance and faster charging time. To prove this, the researchers cycled the carbon-based battery 300 times without significant battery loss. In the future, the Purdue team plans to improve the performance of packing peanut batteries by increasing the surface area and pore size. “The process is inexpensive, environmentally benign and potentially practical for large-scale manufacturing,” said postdoctoral research associate Vinodkumar Etacheri.