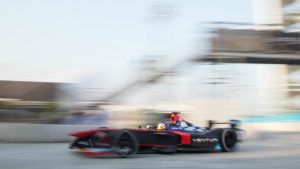 The world’s first driverless car racing series is coming next year. To develop the new race, Formula E, the electric-powered car racing series, has partnered with Kinetik, a venture capital company that describes itself as “a team of technology-mad professionals.”

When the Formula E series debuted in 2014, the teams all had to use the same electric cars, a limitation intended to encourage the teams to develop better battery technology. Similarly, in this new championship, called “ROBORACE,” each team will race the same autonomous electric vehicle. Teams with the best algorithms and artificial intelligence to win the race. The autonomous vehicles are expected to race as fast as 300 kilometers per hour (about 186 miles per hour).

None of the teams have been announced yet, but one team will be crowd-sourced, made up of “enthusiastic software and technology experts,” according to a press release. Denis Sverdlov, founder of Kinetik and ROBORACE, said: “We passionately believe that, in the future, all of the world’s vehicles will be assisted by AI and powered by electricity, thus improving the environment and road safety. ROBORACE is a celebration of revolutionary technology and innovation that humanity has achieved in that area so far. It’s a global platform to show that robotic technologies and AI can co-exist with us in real life.”