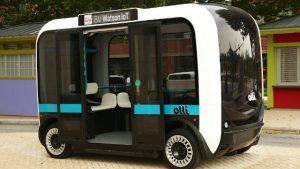 Olli was made by Local Motors, an automaker based in Arizona that uses 3D printing to make inexpensive, low-volume vehicles. Certain components, such as the seating and wheel wells, were 3D printed. The vehicle is equipped with lidar, radar, optical cameras, and GPS that enable Olli to drive itself.

Although IBM didn’t design the car’s self-driving software, Watson IoT will help the vehicle analyze data from more than 30 sensors and chat with passengers. For example, while en route, passengers can ask Olli for restaurant suggestions or even ask the universal road trip question: “Are we there yet?”

Cognitive computing provides incredible opportunities to create unparalleled, customized experiences for customers, taking advantage of the massive amounts of streaming data from all devices connected to the Internet of Things, including an automobile’s myriad sensors and systems.

The vehicle officially launched in Maryland on June 16, but there are also plans to expand to Miami and Las Vegas later this year. It has a range of 32.4 miles and will initially travel at low speeds between 5 and 25 miles per hour.