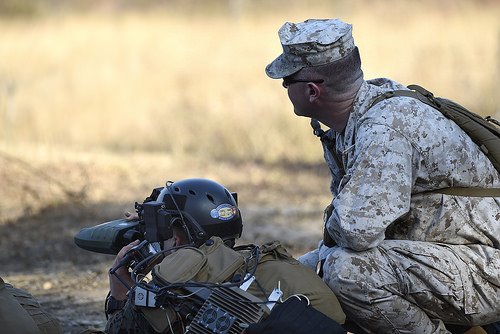 Marines often prepare for battle by training with aircraft, ground vehicles, and munitions, but that practice can quickly become expensive and limited. To help supplement traditional combat training, the Office of Naval Research (ONR) has developed an Augmented Immersive Team Trainer (AITT) system. The technology uses augmented reality to superimpose aircraft, people, and battlefield effects such as explosions into real world scenes.

Field training involves costly equipment that that requires time at a test range and extra people to set it up. Even after a training experience is reserved and ready to go, rain can force teams to postpone the tests in order to avoid damaging equipment. The AIIT, on the other hand, gives marines the ability to train anywhere at anytime, without being limited by real-world constraints such as finding the right area and weather.

To train with augmented reality, a marine only needs a laptop, software and battery pack, and a helmet-mounted display. With this simple setup, an instructor can use an iPad to create scenarios and effects that will be superimposed over the real world. While wearing the headset, marines will see realistic battlefield effects such as helicopters, tanks, opposing forces and explosions from mortar shells and similar munitions. In October, the ONR wrapped up the last test in a series that spanned five years. Next, the augmented reality system will transition from the ONR to the Marine Corps for further testing and development.