Artificial Skin Made from Household Materials Could Transform Medicine, Robotics, and Education 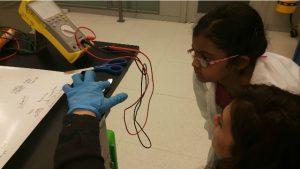 The researcher’s daughter experiments with electronics in school

When Muhammad Mustafa Hussain visited Bangladesh years ago, he noticed that many of the children he met were very talented and eager to learn about electronics, despite having very limited resources. He visited the local school and showed the students how they could use inexpensive household materials to make their own basic electronics. He says that seeing the “joy of discovery” on their faces inspired his current research project: a multi-sensor artificial skin made using only items found in a typical household.

Dr. Hussain developed the artificial skin with a team of electrical engineering researchers at the King Abdullah University of Science and Technology (KAUST) in Saudi Arabia. A paper that published in the journal Advanced Materials in February 2016 describes their research.  In Compliance interviewed Hussain via email to learn more about his team’s project. He explained that in addition to the children in Bangladesh, his own school-aged daughters influence his work, which is influenced by their creative origami and kirigami crafts. “We have a project where we can fold silicon CMOS electronics which is inspired by their design,” he says.

The researchers developed a device that senses just like human skin feels. In their paper, they wrote, “Using only off-the shelf resources, we demonstrated the first ever recyclable paper-based skin capable of detecting temperature, humidity, pH, pressure, touch, flow, motion, and proximity at a record-breaking distance of 13 cm.” To develop the skin, the researchers screened many available household materials to understand their electrical, chemical and mechanical characteristics. Then they integrated the best candidates into arrays. “To the best of our knowledge we are the first one to demonstrate simultaneous sensing of different sensors in arrays,” says Hussain. “We collaborated with Prof. Atif Shamim of KAUST whose expertise is antenna design and communication with complex system.”

The final product is built on a simple post-it note, with layers of paper, aluminum foil, lint-free wipes, and lines drawn with a conductive ink pen. Other research groups have developed similar technology, such as this flexible sensor and this artificial skin, but the KAUST researchers are the first to do it with household recyclable materials. Their device would cost just $15, which the researchers estimate is six times cheaper than similar systems made of exotic materials.

We have already tested the ‘skin’ for body vital monitoring. Amazingly we could measure blood pressure, body temperature, skin hydration and heart rate with a ±5% accuracy compared to those of smart watches.

The smart skin could be used to give robots better sensing abilities, but the researchers say that’s just one of many possible applications. Since the materials are so common and affordable, they hope that it could be used for affordable healthcare solutions, such as helping burn victims. They also think it could be used for citizen science (a movement to make cheap and easy scientific tools available to the public, especially in the developing world), and to help foster an early interest in education and electronics for children like the ones he met in Bangladesh years ago. The researchers recently brought their electronic skin to KAUST’s elementary school and showed the second grade class how to build radios and a calculator using only recyclable materials. Hussain’s daughters have even used recycled household materials to make their own pressure sensor and battery for a Science Fair project.

While the concept is very exciting, the inexpensive smart skin isn’t quite ready to be commercialized yet. The researchers anticipate spending the next year-and-a-half perfecting their design. “We will work on packaging and integration of accessory electronics. Our expertise is flexible-stretchable-reconfigurable silicon CMOS electronics and we are absolutely hopeful that we are on the right track to build fully automated multi-sensory system,” says Hussain.