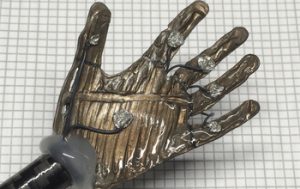 Soft robotics is a growing field involving flexible robots that have several advantages over their rigid predecessors. Soft robots can squeeze into tight spaces, maneuver uneven terrain, and they are safer around humans. An international team of researchers is now developing artificial muscles to give robots the ability to grasp, stretch, and squish objects.

Kwang Kim is leading the research with a University of Nevada team that is funded by the National Science Foundation. They are also collaborating with robotics experts from The University of Utah, Korea Advanced Institute of Science and Technology, and Japan’s National Institute of Advanced Industrial Science and Technology. Together, they are transforming a polymer-based material into artificial muscles. Although the primary aim is soft robots, the material could also be used for medical applications, such as restoring muscle strength to people with disabilities.

The first challenge was finding the ideal material. “It has to be soft, but it also has to produce enough power to do lots of different things,” said Kim. His team is using a 3D printed electroactive polymer called Ionic Polymer-Metal Composites, which is a synthetic material that changes shape in response to electricity. It can also be used to sense motion, another attribute that makes it an excellent candidate for robotics.

The project is still in the early stages. Researchers are working on finding ways to scale up the manufacturing and developing methods for controlling the motion of the polymer. They are also working on understanding and improving the material to make it more responsive, strong, and affordable.