Wireless Certification in the Land of the Rising Sun

The first broadcasting station in Japan went on-air in 1925, a scant five years after the first radio station went live in the United States. A year later, Nippon Hōsō Kyōkai (NHK) was chartered by the Japanese government and is still the official public broadcast entity. The build-out of NHK’s network into the Pacific was extensive in the 1930s and during the early years of WWII and followed the expansion of Japan’s imperial armed forces across the Pacific.

“Tokyo Rose,” a nom d’aether attributed to several different NHK “correspondents,” was a famous voice of propaganda that teased and titillated US troops in the Pacific. After the war and during the subsequent occupation by Allied forces, all radio broadcasting was controlled by the U.S. and for some years international broadcasting by NHK was severely limited.

The rise of broadcasting naturally created a need for radio receiving equipment and the radio manufacturing industry in Japan was heavily influenced by Mr. Tokuji Hayakawa, who developed the first tube radio set (patterned after more expensive import versions). (A fascinating history of the Sharp Corporation can be found by clicking here.) Hayakawa-san was a creative, driven individual who began his long career of design and development with the patented “Ever-Sharp Pencil” (a breakthrough in the development of mechanical pencils—engineers everywhere should thank him for that). After shifting from pencils to power tubes, Hayakawa appropriated the word “SHARP” for his growing radio business and developed numerous models of broadcast receivers under that name, now a global brand for everything from components, cameras, phone and solar products.

Under the Japanese system, there are specific levels of regulations that govern approvals for wired and wireless equipment. They are structured as specific laws and ordinances (Table 1). The Ordinances contain the technical requirements and the process for approvals (conformity assessment).

Certification Body processes are outlined in the “Ordinances regarding Conformity Assessment Procedures” which applies to all RCBs, including MIC’s own TELEC.

Another critical ordinance is MIC Notice 88, January 26, 2004 (Test Methods and Appendix to Post of the Ministerial Ordinance No. 37, November 21, 1981). These documents contain the test methods for the various types of radio equipment. Original Japanese documents cab be found by clicking here. Very few official English-language texts of the test methods are available, which has been a challenge for the English-speaking-only test industry.

One source of documents that can be used for reference purposes are available through the Association of Radio Industries and Businesses (ARIB). This organization has translated several of the common documents, however, it is important to note that the MIC procedures must be referenced or cross-referenced to equivalent methods. This cross-reference protocol was agreed to because of the challenge of translation of test methods and procedures.

These past dozen years or so have seen the successful implementation of Mutual Recognition Agreements and Arrangements across multiple economies, spurring trade between the United States, European Union and Asia. MRAs, as they are called, are high-level agreements that are signed by regulatory bodies in each economy.

The MRA between the United States and Europe is an example of one of the most successful cross-barrier agreements for technology product, allowing manufacturers to test products in their home countries for international markets. This has added to the expansion of global trade since the arrangement was first implemented in December 1998. For the past fifteen years, the trade between the US and Europe has expanded many fold, notably in the critical industries of high technology, electronics and communications. Coupled with the EU’s CE Marking, the MRA has dramatically increased market access for domestic and European manufacturers.

The US-Japan Mutual Recognition Arrangement has been active for the past five years, with real implementation coming on-line around 2010. Negotiated, in part, under the umbrella of the multi-lateral Asia-Pacific Telecommunications MRA, the bilateral agreement was staked out to cover both wireless and wired telecom products and is the sixth such MRA covering certification.

Certification for the Japan market, regulated by Japan’s Ministry of Internal Affairs and Communications (MIC) is directly available for US manufacturers and laboratories.

This has opened the door for manufacturers to get access to the Japan technology market, and “is expected to enhance speed to market, and lower costs in the $2.2 billion trade in telecommunications equipment between the two countries. Japan is now the fifth largest export market for U.S. telecommunications equipment manufacturers, and this agreement is particularly important given the innovation and fast paced growth that characterized both markets.”

Under the terms of the US-Japan MRA, Recognized Certification Bodies (RCBs) have the authority to issue certifications directly. The process lays out the now well-worn path that Certification Bodies have been taking for years: accreditation by an approved Accreditation Body and Designation by (in the US) NIST. The agreement specifies the objective “…to designate private-sector entities in their respective territories to test and certify telecommunications terminal and radio equipment as meeting the technical requirements of the other country.”

Products covered by the MRA include unlicensed and licensed devices. The range of the agreements covering both regulatory structures is summarized in Table 2 (from the MRA).

Note the designation of “Specified Radio Equipment” which is a listing of devices according to function in each of three categories. In Japanese parlance, every radio device is a somewhat anachronistic “Station”. The three categories of equipment are as follows:

The process for Japan Certification has some unique aspects, at least in terms of practice (when compared to the US/Canada system and the Notified Body process for the EU). This is largely because of the way the system evolved; the radio testing and certification community in Japan is relatively close-knit and the processes were built around the notion of trust, confidence and mutual agreement within that community.

Some of the primary characteristics of the Japan certification system, in practice, are:

Note: RF exposure requirements are currently being developed with potential implementation in the first half of 2014. It is understood that Japan will follow, more or less, the European model for dealing with RF hazards. 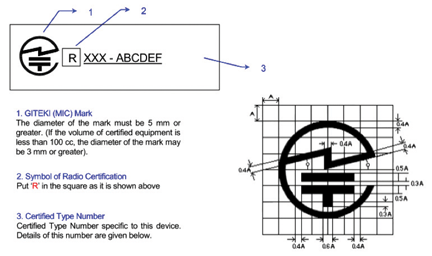 There are a few items that are somewhat unique, notably the requirement for directly addressing the manufacturer’s quality assurance processes. An ISO 9001 certificate is usually all that is necessary, but lacking that, a definitive statement and/or process that address QA management needs to be supplied. Another requirement is the “Construction Protection Confirmation” which states that the radio section of the device must not be easily opened, must have a unique type of fastener, or must be manufactured such that opening the enclosure would render it inoperable (by potting, ultrasonic welding or gluing).

There are also specific variations on output power, wherein the device must “hold” the power between plus 20% minus 80% variation across the operating band.

There is an allowance for equipment in Japan that does not need any certification. These devices can radiate anywhere in the spectrum as long as the field strength limits at 3 m are very, very low (on the order of Class B emissions limits). These devices are referred to as “extremely low power radio stations.” 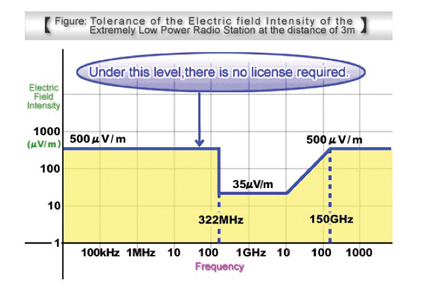 The Japan regulations refer to radio modules as stations that are “Independent of Host” and allow modular approvals. This simplifies the devices approvals for many end-integrators. The module must be tested as a stand-alone device and must be labeled with the certification number assigned by the RCB. There is no provision for the host device to be marked in any way, however additional guidelines are being developed for modular approval certification.

The process for handling permissive changes is similar to the FCC/IC process, that is, a certain limited number of changes can be applied to the device before a new certification number is needed, namely: 1) additional antennas (as long as EIRP limits are observed), and 2) changes in RF components that occupy the same footprint, perform the same function, and donot alter the characteristics of the radio.

Since the certification process is generally a close coordination between the applicant (or agent of the lab), the process for amended certificates is usually not filed with MIC as the basic information on the certificate is not supposed to change (operating power, frequency of operation, model name).

Equipment Connected to the Public Network

The Telecommunications Business Law, introduced earlier in this article, is primarily directed at TTE equipment and other devices that connect to the public networks. Common examples include wired TTE equipment as well as wireless devices (such as mobile phones). In addition to the requirements for conformance with the Radio Law, wireless phones and devices that provide public connectivity (public “hotspots” that are common in coffee shops and the like) must also conform to the Telecommunications Business Law. The primary requirements include protocols and related matters that dictate device connection to the public network. These devices must also have an additional label element, which consists of a “T in a box”.

A Note on Electromagnetic Compatibility

EMC in Japan is largely unregulated and is under the auspices of the Voluntary Control Council for Interference (VCCI), which has been operating with great effectiveness since 1985. The requirements deal solely with emissions from equipment and, as the name of the council states, compliance is voluntary. Most adherents to the VCCI process use it for market-acceptance. As one might imagine, the VCCI mark is very important in the Japanese consumer marketplace.

The access for obtaining wireless certifications for Japan has been opened up significantly. The United States has joined the European Union in signing an MRA that allows for mutually acceptable conformity assessment procedures. In addition to the simple fact that market access has improved for Japanese and American manufacturers, the opening of these requirements has also led to further cooperation and participation in global forums, such as the APEC TEL MRA Working Group, whose purpose is to examine ways to enhance the MRAs and look at matters that arise from the regulatory regimens, representing a firm example of cooperation and underscoring the access that powers global trade in the high technology industry.