With the continual decrease in power rail DC voltages and tolerances, oscilloscopes remain a key tool for development teams tasked with power integrity measurements. The continual trend to lower voltages and tolerances has driven the proliferation of power rail probe usage with oscilloscopes. The question of “should we purchase our first power rail probe” has changed to “what’s the best measurement technique”. Initial techniques have been refined as users and oscilloscope manufacturers collaborate and share insights and experiences.

All major oscilloscope manufacturers offer power rail probes, and these probes incorporate several attributes that make them superior for highly accurate measurement of small voltages with tight tolerances. Lots of material is available on the benefits of using power rails. This includes the probes’ minimal DC loading impact on the power rail, built-in offset to enable users to take advantage of small vertical scaling, and a 1:1 attenuation ratio to minimize noise. The relatively new histogram approach to power rail measurements accelerates test time by more than 50 times while providing more accurate measurement results.

The long-used approach for measuring power rail tolerance is to have the oscilloscope use a voltage peak-to-peak measurement to determine the overall amplitude from noise, ripple, and periodic disturbances (see Figure 1). 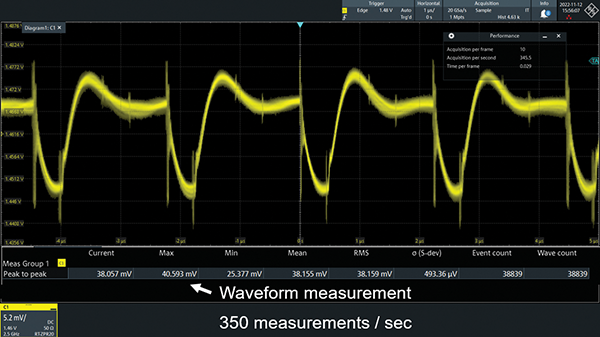 Figure 1: Making a measurement on each acquired oscilloscope waveform slows the update rate and increases blind time when the oscilloscope is not seeing or measuring power rail signal activity.

Oscilloscope users agree that a key issue with this traditional approach continues to be oscilloscope blind time. All oscilloscopes are subject to blind time between acquisitions. During this time, the oscilloscope is processing the last acquisition and cannot perform any new acquisitions until the previous one has been processed. While engineers are generally aware of this, many are not aware that the ratio between blind time and real-time signal acquisition can be extremely large. It is not uncommon to have 1000 times the amount of blind time compared to acquisition time.

Maximum update rates occur at a specific time base setting, with the fastest sample rate, and without any measurements turned on. However, this is not descriptive of a power integrity test setup. At time bases of 1 uS/ and slower that are typically used for power rail measurements, blind time increases.

Testing power rails varies from other types of testing in that a trigger signal is not always readily available. Most oscilloscopes require a minimum voltage swing for detecting a trigger event. Power rails often do not have enough signal swing and hence users choose auto-trigger, which means if the oscilloscope does not find a suitable trigger it will table an acquisition after a predefined period of waiting, typically a few mS. This triggering issue also contributes to users missing significant time when the oscilloscope is not acquiring power rail activity. Alternatively, in normal mode when the oscilloscope is triggering on the signal, it still needs to re-arm the trigger after each acquisition, which in turn slows down the waveform update rate.

Several modifications to the traditional approach enable users to dramatically increase test time coverage and achieve more accurate measurements. The improved measurement techniques build on less frequently used oscilloscope settings that have existed for a long time, but that have not been exploited collectively for a specific application. Power integrity happens to be the key application where these capabilities combine to produce a result far better than the traditional power integrity measurement approach used by most engineers today.

A number of currently available oscilloscopes offer a less commonly known feature called waveform histogram (see Figure 2). The instrument computes all waveform values and produces a corresponding histogram that shows what vertical values the waveform had, and what percentage of acquisition samples were at a specific amplitude. In a sense, histograms are very compact representations of waveform amplitude values at each sampled point. The histogram does not retain the detail related to the shape of each waveform, but rather just the vertical values. This is exactly what is needed for power integrity measurements. 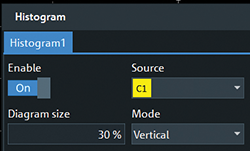 Figure 2: Turning on an oscilloscope waveform histogram creates a compressed statistical model of all vertical waveform values across all past acquisitions that the oscilloscope can quickly measure.

Figure 3 shows a waveform histogram of a power rail. From the histogram, the user can quickly determine how much of the time the signal under test spends on each level. The histogram incorporates information from all acquired samples in each acquisition and builds up with each successive acquisition. 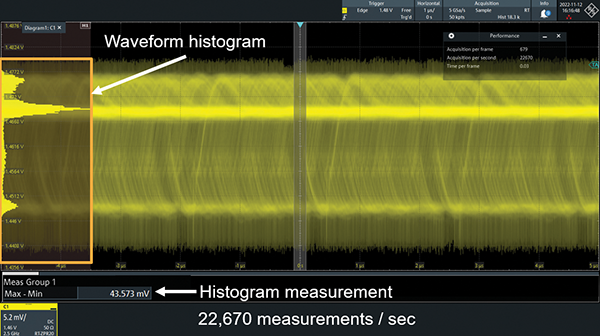 Figure 3: For some advanced oscilloscopes, a max peak-to-peak histogram measurement with free run trigger mode can yield nearly 23,000 power rail measurements per second. This is a >60X improvement over the traditional method, allowing users to see and measure over 20% of real-time rail signal activity.

2. Make the Peak-to-Peak Voltage Measurement (Vpp) on the Histogram

In addition to the speed increase, the peak-to-peak measurement on the histogram is made across all acquired data. It constitutes the true max peak-to-peak voltage from the highest value versus the smallest value. This provides the correct overall peak-to-peak value overall acquired data, versus the less accurate traditional approach that measures just the worst-case single acquisition that may not include the highest maximum voltage and the lowest minimum voltage of all acquisitions.

3. Use Free Run Trigger Instead of Auto or Norm Trigger

The third technique to achieve a more comprehensive, hence more accurate, power integrity test on power rails includes a change in how engineers trigger their oscilloscope. For testing rail voltage tolerances, triggering on a specific part of the waveform is not required. In fact, in many cases, oscilloscopes require larger voltage swings than occur on power rails. Because of this, testing of power rails is often done with the oscilloscope set to the default auto-trigger mode. If the oscilloscope does not find a trigger within a short period of time, typically a few mS, it goes ahead and acquires. The auto trigger mode inherently slows down the oscilloscope acquisition rate, meaning testing includes a small portion of the power rail real-time signal activity. Switching the trigger mode to norm yields a similar update rate as the auto trigger.

For power integrity tolerance testing, a trigger on a specific part of the waveform is not critical. Many oscilloscopes incorporate a less common trigger mode known as free run (see Figure 4). With the trigger set to free run, the oscilloscope captures data, processes the data, and then captures the next acquisition without having to look for or wait for a trigger event. The tradeoff is that the trigger does not occur at the same point of the waveform each time. For power integrity tolerance testing, triggering on the same part of the signal each time is not needed and there are benefits in asynchronous triggering. Free run mode yields a waveform update rate dramatically faster than in auto or normal trigger modes. For example, on a specific oscilloscope tested with a time base setting of 1 uS/, in auto trigger mode the capture rate is 1,200 wfms/s while in free run the acquisition rate increases to 22.7 K wfms, almost 20 times better.

Table 1 shows the difference between the traditional measurement-per-waveform approach, versus the refined histogram combined with free-run trigger mode. (An R&S model RTO6 oscilloscope was used to highlight the differences between the two approaches.)

Like many approaches, combining multiple techniques yields significant advantages. For power rail testing with oscilloscopes, using waveform histograms, plus measurement on histograms, plus free run trigger mode enables users to capture and analyze a significantly higher percentage of rail activity than the traditional method of making peak-to-peak voltage measurements on individual waveforms with the oscilloscope’s trigger set to auto or normal mode.