What’s the Trouble with AMRs?

Semiconductor manufacturers believe their published AMRs are clear and sufficiently accurate, such that customer returns with EIPD would be virtually nonexistent if limits were strictly enforced. Electrical AMR values on datasheets may appear as if they are limits for direct current (DC) only, but unless otherwise stated, the limits apply to transients as well. After all, these limits are absolute maximums. Clarifying statements or warnings may accompany an AMR table and can also be found on manufacturer websites and publications. Electronics standard IEC 60134 defines Absolute Maximum Ratings for electronic components in part as “limiting values… which should not be exceeded under the worst possible conditions”. Customers of electronic components should “design so that, initially and throughout life, no absolute maximum value for the intended service is exceeded” [2]. Design practices for electronic boards, modules and systems invariably comply, but there is evidence that inadequate controls in semiconductor customer assembly and test operations can permit EOS events to occur, though frequently undetected [1].

Semiconductor product datasheets provide maximum operating limits for successful operation while preserving the built-in reliability. Additional datasheet limits typically include powered AMR and unpowered (electrostatic discharge (ESD) withstand voltages) warning that physical damage may occur if exceeded, jeopardizing reliability. But customers don’t always agree with published AMR, thinking that stated values may be overly conservative, lacking in detail, or incomplete in scope. There is no standardized method in the industry for determining and publishing AMR. In fact, methods may vary greatly within the same semiconductor manufacturing company. Customers question whether limits have been properly determined and specified, and may guess at what the “true” limits should be. Datasheets do not usually provide information regarding interactions between temperature and electrical parameters. Many customers would like more information on the actual risk in stressing an individual pin beyond a limit. Certainly, some pins are more robust against EOS than others, though datasheet may list single values to apply for all pins. Some customers believe that short excursions beyond electrical AMR are acceptable, based on their own experience, though they actually cannot assess whether latent damage has occurred. Customers may not realize that stress exceeding AMR, even for very short duration, increases the probability of damage and product failure.

Figure 1 is a chart from the Industry Council on ESD Target Levels, illustrating that the risk of damage and unreliability increases with increasing electrical stress [1]. Reliability is warrantied within the maximum operating limits, Region A in the chart. Reliability lifetime shortens predictably when the device is stressed a small amount beyond a maximum operating limit, Region B. Risk of EOS damage begins at AMR, with risk of latent damage causing unpredictable reliability in Region C. Continuing to increase stress increases the probability of significant damage causing product failure, conceptualized by the probability “S-curve” into Region D. 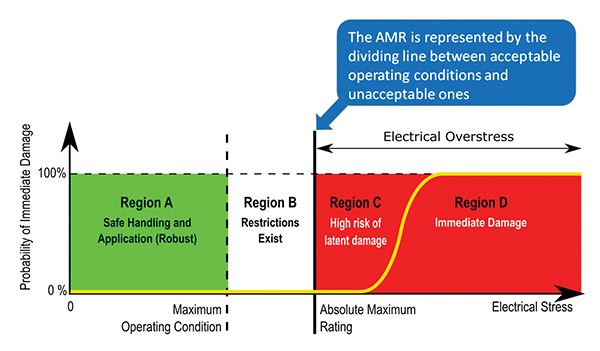 Specific failure mechanisms activate during an EOS event, depending upon the nature and magnitude of the event, and the particular circuit elements encountered by the aggressor pulse. Semiconductor junction leakage, or dielectric breakdown, or electromigration may occur. These may lead to diffusion, melting, or cracking, and shorting or open circuits which in turn may cause additional damage. Violation of AMR may also result in a latch-up condition, which then leads to junction short and melted metal. The resulting EIPD from any of these failure mechanisms leads to unreliability if not immediate unit failure.

The dilemma surrounding AMR and customer returns having EIPD has existed for decades. It prompted the Industry Council on ESD Target Levels to produce the above mentioned publication [1] which details information about EOS and discusses resulting EIPD which becomes the reliability problem. A more recent effort in the EOS/ESD Association, Inc. resulted in the publication of standard practice ANSI‑ESD SP27 [3] to facilitate the necessary cooperation and data exchange between automotive “tier 1”, OEM customers, and the semiconductor manufacturer. This cooperation is intended to improve the likelihood of root cause discovery regarding failing parts with EIPD.

The Industry Council on ESD Target Levels has an active project to further investigate transient EOS, and best methods for determining, publishing and interpreting AMR for semiconductor products. A new industry survey has been conducted, and published information regarding EOS and practices in determining AMR are being evaluated and summarized. ANSYS-DfR Solutions manages the project, and welcomes input and participation (contact Ashok Alagappan at ashok.alagappan@ ansys.com).

Stevan Hunter, PhD, is a Member of Technical Staff at ON Semiconductor in Phoenix, Arizona, USA, working as Reliability Engineer, ESD Control Champion, and Lean Six Sigma Instructor, with 40 years’ experience in semiconductor engineering. He holds certifications as Lean Six Sigma Blackbelt, Reliability Engineer, and ESD Factory Control Manager. Stevan is also a Faculty Associate at Arizona State University, BYU-Idaho and University of Maryland CALCE. He is a Senior Member of IEEE and ASQ, and member of IMAPS, SRE, AVS, ASEE and ATD.