A Review of Amendment 1 to the 6th Revised Edition

The UN Recommendations on the Transport of Dangerous Goods, Manual of Test and Criteria outlines recommended testing to minimize hazards that might occur during transportation by air, ground or vessel. Section 38.3 deals specifically with the transportation testing requirements for rechargeable and non-rechargeable lithium cells and battery packs. This series of tests is commonly known as “T1-T8” testing in reference to the regime’s eight component tests. The current version is the 6th Revised Edition which became effective in January 2016.

Released in late 2017, Amendment 1 to the 6th revised edition became effective on January 1, 2019. The scope of changes includes:

The scope statement at the beginning of the standard provides detail regarding which tests are required for the many categories of lithium energy devices, be they a cell or battery pack, rechargeable or non-rechargeable, etc. An omission had previously been noted regarding embedded batteries, that is, batteries that are installed in the device that they power and are never shipped outside of that device (an example might be a portable power tool that has a built-in, non-removeable battery). A statement that has been appended to the scope notes that such batteries may be tested while installed in their supported host device. This is important as some batteries of this type rely on the host device for both mechanical and electrical protections, and thus testing them alone is not representative of how they will be presented for transportation.

The definition of the criteria term “Disassembly” was also expanded. In general terms, disassembly refers to the rupture of the cell or battery case where solid materials are ejected, but this is further qualified to mean that the energy must be low enough such that the ejected materials do not penetrate a specified metal screen placed around the device at a specific distance. Amendment 1 permits alternative methods to the metal screen if equivalence can be demonstrated.

Amendment 1 adds test tables for both non-rechargeable (“Primary”) and rechargeable (“Secondary”) devices. The table links the type of device, the tests required, the quantity of samples, and their respective charge state at the beginning of testing. The intent of these tables is to better present the user with a clearer explanation of the standard’s requirements, thus reducing the chance of improper application. An example of such a table is shown in Figure 1. 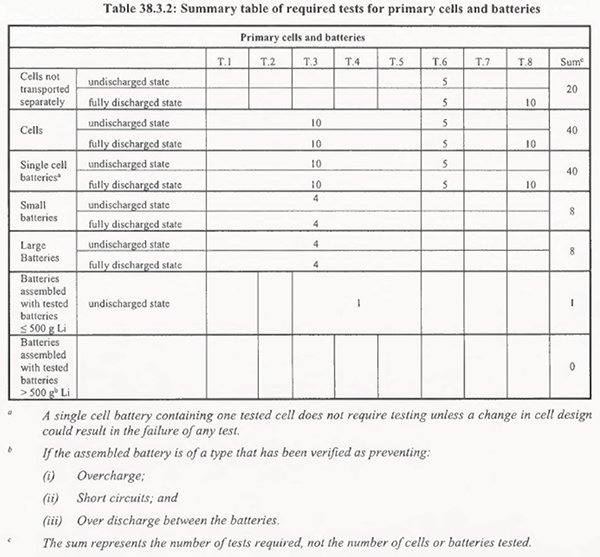 A critical change implemented by Amendment 1 is a 50 percent reduction in the number of charge-discharge cycles required for preparation of rechargeable cells and batteries. Previously, 50 cycles were required. This has been reduced to 25 cycles, a duration believed more efficient to age the products for the purposes of this standard.

Finally, Amendment 1 implements the minimum requirements for a standardized test summary report (see Figure 2). The intent is to ensure a degree of consistency in the reporting of the testing that might be reviewed by carriers, regulators and other supply chain entities. Most of these requirements were already being included by most test labs. They provide sufficient identification information in addition to test results and are in keeping with laboratory reporting requirements found in quality systems such as ISO/IEC 17025. 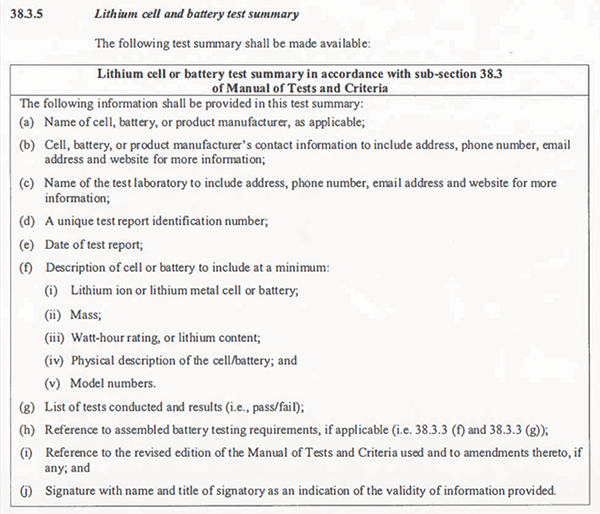 The actual testing specified within the standard remains virtually unchanged. For those seeking to achieve compliance, this means ensuring the design of the battery is both electrically and particularly mechanically robust. As a commercial test lab specializing in cell and battery testing, we see a significant volume of this testing and would offer that most test failures occur during the T1-T5 sequence. The sequential aspect refers to the fact that the same eight batteries will be put through five stress tests in sequence. Half of these units will be fresh, whereas the balance will have been charge-discharge cycled 25 times to bring in an element of aging. All tests are run with the units configured as they will be during shipment.

Descriptions of the five sequential tests along with typical failure concerns follow:

In addition to T1-T5, separate groups of cells must go through two cell-only tests:

Finally, rechargeable battery packs that have overcharge protection must be evaluated to one additional test:

Note that a separate group of battery packs is used for this test, although functional samples from T1-T5 can be reused if sample quantities are limited. The decision to reuse should not be taken lightly as latent damage from the T1-T5 sequence may result in failures during overcharge. This, in turn, may lengthen the required time in test and incur additional costs for retesting.

In summary, the new Amendment 1 implements a number of significant improvements to the standard that should benefit the industry with improved efficiency and standardization. The testing itself carries forward from the previous version of the standard and is still both electrically and, especially, mechanically intense.

For those new to needing to achieve compliance, having a full understanding of what test parameters will be applied to the design is critical. Additionally, some degree of pre-testing, either in-house or outsourced, may be beneficial to improve the chances of a successful first-time outcome. Finally, consideration of the impact of stresses being sequential during T1-T5 testing is also important. As always, your test lab has significant experience and should be both able and willing to offer general guidance to help you achieve your compliance goals.

This article is updated with the most current information available as of 2/1/20.