Well, not really. It’s a good starting point, but you need to know that the flooring and footwear work together. Unfortunately, I’ve seen cases where they don’t. If that happens, you’re fooling yourself if you think you’ve got human body ESD risk under control. I’ve seen a person wearing footwear that measures about 10 MΩ, standing on a floor that measures about 10 MΩ, but their resistance from body to ground was over 1 GΩ, and a body voltage test while walking showed well over 100 V.

Hang on – how can that be? If the footwear and flooring were both about 10 MΩ, surely the resistance from body to ground should have been about 20 MΩ?

In an ideal world, you might think so – but there’s another factor – contact resistance between the footwear and the floor. 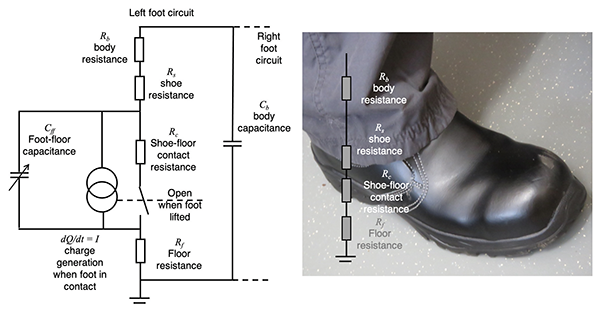 So how does a footwear and flooring system work, and why does it sometimes not work?

Life’s not so simple, and that’s why both standards insist we must qualify each type of footwear we use in combination with each type of floor we will use it with. A circuit model, as shown in Figure 1, can help us understand why this might be. It might look complicated, but it’s actually much too simple, and only the left foot circuit is shown – the right foot circuit is similar.

Let’s imagine that the body is like a capacitor Cb. While walking, this capacitance gets charged and discharged via the body resistance Rb and the shoe Rs, because charge is generated by shoe-floor contact. While the shoe is in contact with the floor there is a contact resistance Rc and lifting the foot acts as a switch breaking contact. With the foot in contact with the floor, discharge is through the contact resistance Rc and the floor Rf.

Charge is generated by shoe-floor contact.  Let’s assume this actually charges a foot-floor capacitance Cff while there is contact. Cff is a highly variable capacitance, which varies from a high value when there is shoe-floor contact, to a low value when lifted. Assuming that at the moment of lifting there is some charge Q on Cff, a voltage is produced which increases as Cff reduces (Vff   = Q/ Cff  ). It’s this voltage that charges Cb via Rs and Rb and produces the peaks seen in a body voltage walking test.

Assuming the person is walking, Cb discharges at the same time through the other foot circuit via Rb, Rs, Rc, and Rf. The rate of discharge depends on the total of these resistances. The higher this total, the greater the voltage produced by a given current flow. To stop the body voltage from increasing, the current flow through the discharging part of the circuit must be greater than the charging current from the reducing capacitance of the opposite foot lifting.

So, this model tells us some useful things. It tells us that there are many factors other than shoe and floor resistance that contribute to the body voltage waveform in a walking test. This can include things like shoe size and the way we walk, as this affects Cff and the way it changes as the foot is lifted.

The charge on Cff is affected by the way the footwear and floor materials charge against each other – high charging material combinations would be expected to give a higher charge on Cff on lifting the foot. So, two sets of footwear and flooring with otherwise identical resistance characteristics (including contact resistance) can give different charge generation and therefore, different body voltages.

So, if you really want to know whether your footwear and flooring are working together, measure the resistance from the wearer via footwear and flooring to earth (ground). Then, do a walk test to show what body voltage is produced. And, yes, do this for every combination of footwear and flooring you plan to use. And, by the way, be careful how you clean your floors – surface contaminants like cleaning materials and polishes can change both the contact resistance and charge generation characteristics of the footwear-flooring combination. In manual component handling, all of this gets more important as the components you handle get more sensitive (lower withstand voltage), especially below 100 V HBM.