Recognizing the Signs of Structural Resonances

Has it happened to you? When troubleshooting an electromagnetic interference (EMI) issue, you’ve tried various combinations of components and saw the signal of interest reduced. But another frequency signal unexpectedly raised above the limit line. Or, you introduced a chassis plane on your printed circuit board (PCB), only to find the radiated emissions became much worse instead of getting better. These are typical cases of “tuning the resonances of a circuit.”

Most EMI emissions are related to structural resonances. Structural resonances are also one of the main reasons that electromagnetic compatibility (EMC) can be mystifying. Unknowingly, engineers often spend days and months tuning the resonances of a circuit by adding passive elements such as inductors and capacitors. Sometimes, they are lucky enough to finally arrive at a combination that would give them a pass. But most of the time, solutions are hard to find.

EMC engineering often requires problems to be resolved (but not studied) within a limited time. Therefore, techniques that are effective but also save time are encouraged. There are indicators that signal the presence of structural resonances, and engineers can learn to use these indicators to locate the resonant structure and fix the EMI issues. This article also explores some practical techniques in troubleshooting EMI issues that are caused by structural resonances. Case studies are presented to illustrate these techniques.

The following conditions need to be met in order for a structure to resonate:

Figure 1: Typical cases of structural resonances; (a) Two PCBs with a wire connection; (b) Two cabinets with the same ground point.

Generally speaking, there are three methods to locate structural resonances which include the analytical, frequency domain and time domain techniques.

An analytical approach generally requires experience and technical know-how to model/simulate the system. For small systems with known issues, such as the case study presented in Reference 1, simple mathematical calculations are often good enough to give an estimation of the resonant frequency of the device under test (DUT). Often, an analytical approach is achieved either by 3D full-wave simulation or some specialized EMC software.

The benefit of the analytical approach is that it can make a prediction before a prototype is built, making this approach popular in the design and development of automotive, aerospace, and space applications. Often, such companies have simulation models that have been validated in the past and that can be easily modified for a new study. But for companies that don’t have existing models, building a simulation can be a costly and lengthy journey.

In the frequency domain, there are two main techniques. Measuring the reflected power by a magnetic field loop is discussed in Reference 2 and the same method was demonstrated in Reference 1. This method requires a small magnetic field loop to “sniff” suspicious structures, often on the PC board level. Williams introduced a far-field measurement using a spectrum analyzer with a tracking generator (see Reference 3). A reference signal is injected into the DUT by the tracking generator output and an antenna is used for measuring the response signal. This method is particularly useful in applications where the PCB ground resonates with the enclosure (chassis). Both methods are practical and only require a small amount of test set-up. The drawback of these methods are they are often limited to PCB board-level investigation and are not useful in large systems.

In the time domain, measuring the resonant current with an RF current monitoring probe when a pulse is injected into the system is often used (see Reference 4). This serves as an effective technique when it comes to troubleshooting large systems or where multiple PCBs are interconnected.

Table 1 summarizes the techniques and pros and cons of each method.

These techniques are introduced and demonstrated in Reference 1. This article further explores more practical approaches based on the characteristics of structural resonances.

Resonances Increase the Amount of Emissions

One of the typical characteristics of structural resonances is that resonances can increase the amount of emissions because the final radiator is more efficient than the original radiator (see Reference 5). The following case study demonstrates the point.

During the radiated emission tests of a large-size electric vehicle, it was found that a narrowband spike at 222MHz exceeded the limit (Figure 2a). It was found that the noise came from a camera that was fitted in the cabin of the vehicle. Multiple ferrites were used on the power leads of the camera, but the improvement was not significant enough to suppress the noise (this is another sign of structural resonances). The test also showed an “inconsistency,” as the same noise was measured a lot lower on some occasions (as shown in Figure 2b). We accidentally discovered that the difference in the emission results was caused by the door of the vehicle. When the door was open, the noise emission was significantly less than when the door was closed.

Figure 2: (a) Noise at 222 MHz caused by the in-cabin camera (b) when the door of the vehicle was open

By themselves, the vehicle cameras and their associated circuitry including the 20 cm long power leads were not an efficient radiator at the frequencies (and the harmonics) contained in the circuits. As shown in Figure 3, when the door was closed, it was positioned near the camera area. The door was mainly glass, but the frame, together with the mechanical structure linking the door, was part of the metal enclosure and should be considered an EMC concern. Even though the door was not in physical contact with the camera, the parasitic capacitance and inductance coupled the RF energy of the camera onto it, and the noise at 222 MHz was radiated very efficiently. At 222 MHz, a halfwave length wire is about half a meter. The structure shown in Figure 3 can easily act as an efficient antenna. 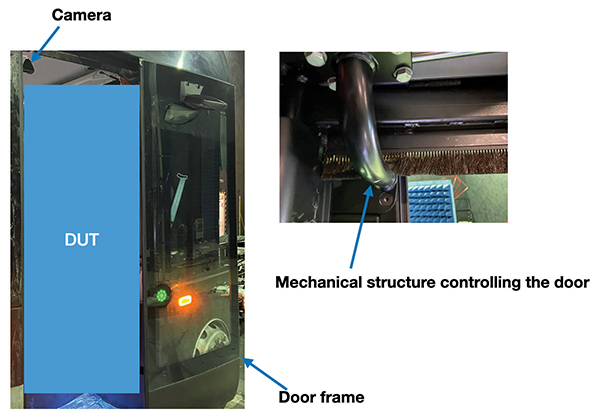 Figure 3: The door of the DUT acts as a more efficient antenna and increases the emissions

Identifying and locating the structural resonance is often the most difficult part of the job when it comes to EMI troubleshooting. In this case, it makes sense that the ferrites on the camera power leads were not effective as the final radiator was not suppressed. A more sensible approach is to segregate the noise source by shielding the camera power lead with aluminum foil and locating it away from the door. This also serves as a cost-effective way of fixing the issue. The noise was significantly reduced when the door was closed as shown in Figure 4. 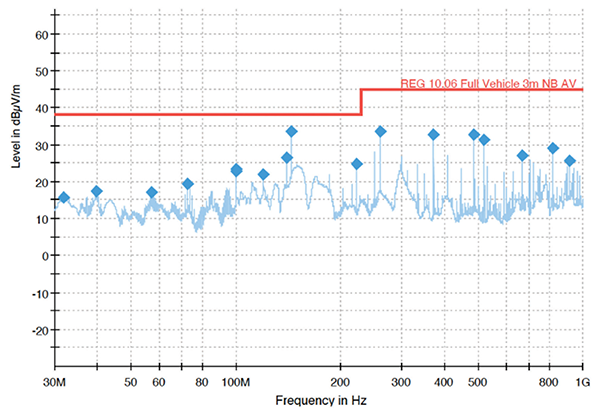 In this case study, a device failed the immunity tests (both radiated immunity and bulk current injection (BCI) tests) in the frequency range of 200 and 400 MHz, and the range of 800 and 900 MHz. In other frequency ranges, the device worked as normal without error.

The PCB of the DUT has a size of roughly 50 mm × 50 mm, forming a 200 mm-long loop. The assumption was that traces and tracks on the PCB might have formed an efficient loop antenna within the 200-350 MHz frequency range. Electromagnetic wave travels in an FR4 material at a speed of 1.5×108 m/s, based on equation v=λf, where v is the speed of light in FR4 and f is the frequency. For a 200 MHz wave, a full wavelength is then calculated to be 750 mm. A quarter of wavelength (where the radiation is the strongest) is 187.5 mm. The PCB itself can resonate at a frequency range of 200 MHz. It would probably absorb more RF energy at 200 MHz (and its harmonics) which is injected from the noise source in the immunity tests.

Using an RF current monitoring probe, we measured the RF in front of and behind the PCB in the immunity test, as shown in Figure 5. A frequency sweep was performed from 100 MHz to 1GHz. The RF amplifier injected the same level of RF noise into the main connector cable via a BCI probe from a frequency range of 100 MHz and 1 GHz. The results are shown in Figure 6.

Figure 5: Test set-up to measure the RF current on two locations of the DUT, location 1-before the PCB; location 2 – after the PCB 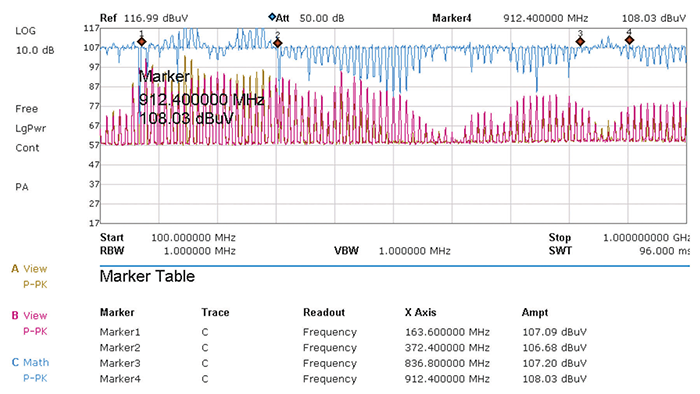 The yellow trace showed results in location 2 and the pink trace showed the results in location 1. The blue trace is the difference between the two measurements. Basically, the positive profile shown in the blue trace (as shown from frequency point markers 1 and 2 and from frequency point markers 3 and 4) means the PCB amplifies the input signal, whereas with the rest of the frequency range, the PCB attenuates the RF noise (shown as negative profile). We now know why we had an immunity issue between 200 MHz and 400 MHz and between 840-920 MHz.

Another sign of structural resonances is that ferrites often don’t work as effectively as they should. For instance, in the first case study, ferrites on the power lead of the camera didn’t suppress the noise as one would hope. Using a ferrite as a filter element to reduce cable resonance is usually effective as ferrites are resistive (lossy) and should act as a damping element. But if the main structural resonance is not the cable, adding ferrite sometimes adds reflections. As a result, the noise level stays the same or shifts with frequency.

Figure 7 shows the conducted emission of a newly developed PCB design which created a resonance issue between 50 and 100 MHz. As it can be seen, the new design improved the low-frequency performance of the PCB but failed significantly at high frequency. What the engineers found was that even with multiple ferrites on the power cable, the conducted emission could not be reduced. In the frequency between 50 and 100 MHz, the noise profile stayed high. 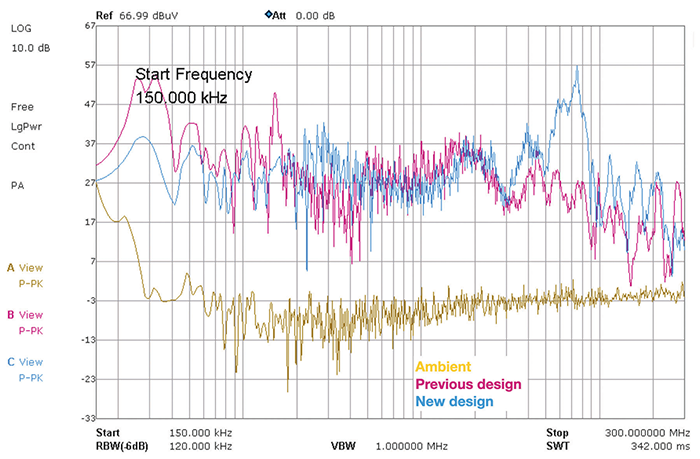 Figure 8: (a) connecting the chassis and the ground plane by copper tape connections (b) the conducted emission results improved significantly