One of our members suggested I write about thermocouples and temperature measurement. Textbooks have been written on this subject; I can only give a broad overview of the subject. Since temperature meaurement is indigenous to every safety evaluation, perhaps I can demystify some of the rules applied by the various certification houses.

Thermocouple Theory
Let’s tackle this last question first. According to ANSI MC96-1, a thermocouple is “two dissimilar thermoelements so joined as to produce a thermal emf when the measuring and reference junctions are at different temperatures.”

In 1821, Thomas Johann Seebeck discovered that, in a closed circuit made up of two dissimilar metals (thermoelements), electric current will flow if the temperature of one junction is elevated above that of the other. This phenomenon is known as the “Seebeck effect.” See Figure 1. The “circuit” comprises a thermocouple. All dissimilar metals exhibit this effect.

Note that every wire has two ends. When connected into a circuit, every wire has two junctions, one at each end of the wire. Where a junction involves dissimilar metals, the wires become thermoelements. Where both junctions involve dissimilar metals, the system becomes a thermocouple where one junction is the “measuring junction,” and the other end is the “reference junction.”

(The tricky part of the system is to connect the meter in such a fashion as to neutralize the effect of nonmeasuring junctions of dissimilar metals. More about this later.) 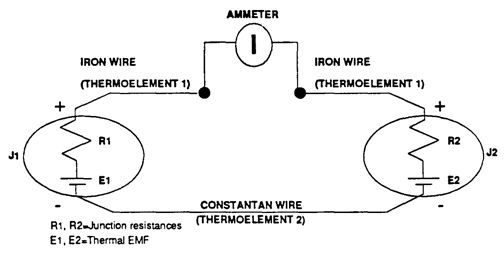 We can eliminate the effects of R1 and R2 by replacing the ammeter with a voltmeter. See Figure 3. The voltmeter measures the voltage difference E + E1 – E2, between the two junctions. If we know the temperature of the ref-erence junction, then we can deter-mine the voltage E2 by looking up, in tables, the voltage that corresponds to the reference junc-tion temperature. Now, we can solve the equation E1 = E + E2. We now go back to the tables and look up E1 and its temperature, which is the measuring junction temperature.

If the reference junction temperature is at 0° C (in an ice bath), then, since the voltages in the tables are referenced to 0° C, E2 = 0, and E = E 1. Now, we can eliminate the summing step, and just read the temperature directly from the tables.

Voltmeter Junctions
Now the question: How do we deal with the connection (junctions) of the iron wire to the copper wires of the meter? Recall two statements: First, all dissimilar metals exhibit the Seebeck effect. Thus, the connection from the iron wire to the two copper wires constitutes another thermocouple. Second, when two junctions are at the same temperature, the thermal emf s are equal, and there is no current in the circuit. So, we put the two iron-copper junctions on an isothermal block so that the temperature of one junction is the same as the temperature of the other junction. (See Figure 3.) Thus, the two additional junctions cancel out, and do not contribute to the measurement.
Reference Junction Temperature
The temperature of the reference junction needs to be determined. There are several ways to do this.
First, we can force the junction to a particular temperature. The most obvious is the ice bath. But this is cumbersome.

Or, second, we can put the refer-ence junction onto an isothermal block and measure the temperature of the block by some other means. This is commonly done with a thermistor.

Or, third, we can use a battery and thermistor circuit to generate the same voltage as if the reference thermocouple was at 0° C. This is the “electronic ice point.”

In each case, and possible after some intermediary steps, the result is the voltage (proportional to the temperature) of the measuring junction. The next step is to convert the voltage to a temperature.

Voltage-to-Temperature Conversion
First, we can simply look up the voltage in a table, and read the corresponding temperature. This could be done either manually or with an electronic memory.

Or, we can calculate the temperature from an equation of the relationship between voltage and temperature.

Or, we can assume the voltage- to-temperature relationship is linear, measure voltage, employ a scale factor, and read out tempera-ture (with some inaccuracy).

Thermocouple Types
There are many different thermocouple types, and the more common types have been standardized by letter designation and color coding of wires, connectors, and isothermal junction blocks. Certification houses have standardized on the Type J thermocouple because it is inexpensive and, therefore, popular and readily available, and it has a suitable temperature range.

Despite this standardization, mixups occur. A cup of ice water will not show a mixup of thermocouple types since, by convention, 0° C corresponds to 0 V for all thermocouple types. Instead, a cup of boiling water confirms whether the system is homogeneous and calibrated.

Thermocouples vs. Other Thermometers
Why do we use thermocouples rather than other temperature-measuring devices? Certainly one of the reasons is that thermocouples have been around for a long time and are well-characterized in their performance. By standardizing on one particular system, thermocouples, one of the variables in temperature measurement is eliminated.

Thermocouples, in general for safety evaluation, have relatively low thermal mass compared to the part being measured. This is necessary because a thermocouple always takes heat away from the object being measured, and lowers the temperature by some amount. To minimize this error, we use the smallest thermocouple practicable for the particular measurement. CSA, for example, specifies No. 30 A WG thermocouple wire with a welded junction.

The general rule is: use the least amount of material practicable for attaching the thermocouple to the pan.

Hazards
What is the hazard that is prevented, controlled, or limited as a result of measuring temperatures within electronic equipment? This is not at all intuitively obvious, nor is it obvious from a study of the various certification-house standards. We begin to get an idea of the hazard from the title of Clause 7.2 of IEC 348, “Safety Requiremerments for Electronic Measuring Apparatus.” The title: Preservation of Insulation.

Measurements
Now we can begin to decide what pans should be measured. Obviously, we measure all safety-related insulations. This would include transformers, inductors in mains circuits, printed wiring boards, switch bodies, thermoplastic-insulated wires, etc.

In some standards, we are required to measure semiconductor devices and resistors. Why do we measure these components since they are not a safety insulation? We do so because wire insulation could come in contact with the devices and be burned.

The temperature-rise limits specified in standards are conservative when compared to rated temperatures of insulations, etc. And, they assume that the ambient temperature will be in the neighborhood of 20 to 25° C. For example, a typical Class 105 insulation is allowed to rise 65° C. So, if ambient is 25° C, the absolute temperature is 90° C, comfortably below the 105° C rating.

Temperature-rise measurements and limits are used for the purpose of standardizing measurements between parties when the ambient is not closely controlled.

Due to space limitations, I have covered only a limited number of details within this subject. My selection of subjects is based on my personal experiences (or, rather, problems) encountered in temperature measurement and the use of thermocouples. 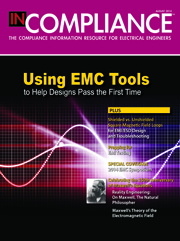