Thermal testing, also known as heat testing, is one of the most critical tests required by the majority of regulatory safety standards in determining the safety of a product.
Excessive heat is the number one enemy in any electrical or electronic circuit. Designers are perpetually trying to improve the way to reduce heat or partially cool their products because they are being asked to design products with higher power density into smaller sizes, while operating temperatures of components or devices have not changed greatly over the past few decades. This means that component temperatures must be well controlled to avoid any failure and to increase the reliability of the product.

This article will cover basic fundamentals for thermal measurement and provide some of the methodology used to arrive at accurate measurements.

Accurate temperature measurement of components can be challenging. An important tool used in thermal measurement is the thermocouple, one of the most accurate and repeatable.

Although there are many devices or methods used for measuring temperature, thermocouples are one of the simplest and most commonly used sensors. Having said that, using an infrared camera can quickly help identify any hot spot.

Thermocouples consist of two wires of dissimilar metals, joined near the measurement point or junction (Figure 1). The output is a small DC voltage measured between the two wires. This differential voltage is then converted to a temperature using specially designed equipment such as a chart recorder or data logger.

There are over a dozen different types of thermocouples commonly used in various industries. Most of these have been given internationally recognized letter designator types, such as B, C, D, E, G, J, K, L, M, N, P, R, S, T, and U.

Types J, K, and T are among the most commonly used thermocouple types in the electronic industry due to their ease of use, low cost, and availability. Each thermocouple has its own temperature range and accuracy. For example, the range for type J thermocouples is –210°C to +750ºC, while for type T the range is –100°C to +350ºC; for this reason, they are used for different applications. These temperature ranges are approximate because manufacturers state slightly different numbers. They also have different color codes. For example, in North America a type J is white and red, but in the rest of the world a type J is typically black and white.

The following is a list of recommendation that must be considered before taking any thermal measurements:

The following factors may affect the final results:

It would be helpful to explain what thermal stability is. A temperature is determined to be constant or stabilized when the graph on a chart recorder or data logger is shown to be flat without any temperature rise and shows three successive readings are within 1°C of each other when taken at 30-minute intervals. Unfortunately, there is no harmonized standard that defines thermal stability and each standard has its own definition. The most important point to bear in mind is that temperature rise is always an exponential curve. Therefore the easiest method is to use a chart recorder or data logger simply because the curve as temperature becomes stable is readily visible.

Figures 3 and 4 illustrate respectively measurements where thermal equilibrium has been achieved and where complete thermal stability has not been achieved. 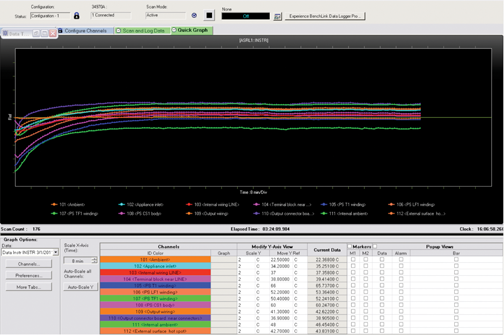 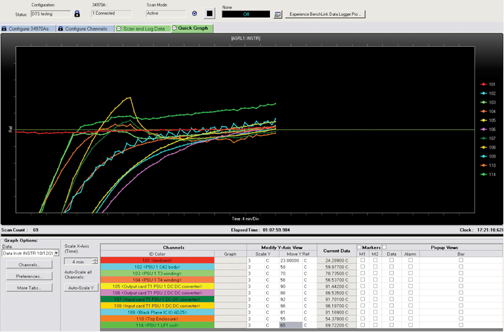 Before publishing the final results, take the following steps: 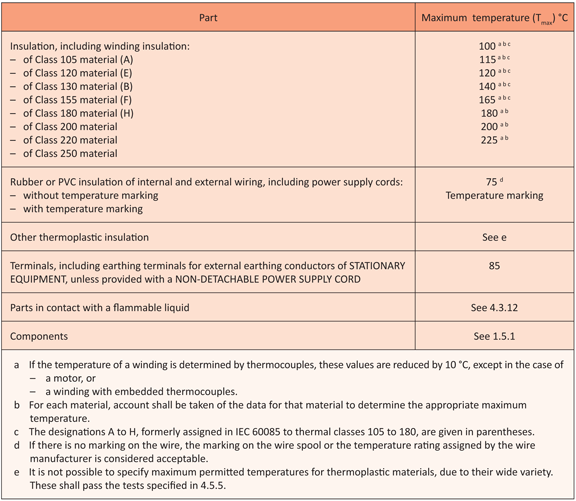 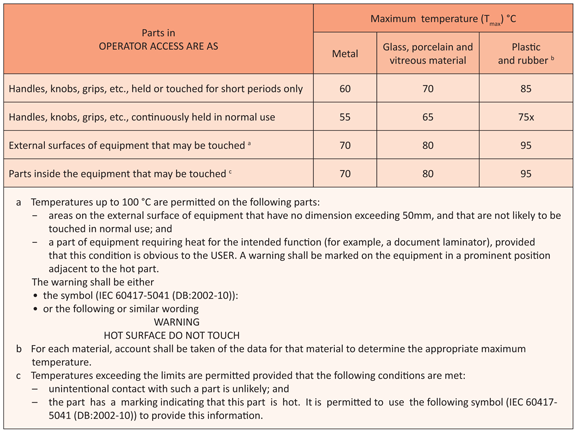 Typically manufacturers market their products much higher than 25ºC. Based on the manufacturer’s recommended ambient temperature, also known as Tmra, either the limits or the measured temperatures must be corrected accordingly.

The formula below shows how to make the adjustment:
T < Tmax + Tamb – Tma

An electrolytic capacitor is measured to be 63°C at a room ambient of 23°C. The capacitor is rated for 105°C and the manufacturer needs to qualify this product to 50°C operation. Does this component meet the required limits?

Using the above formula:

The component meets its permitted limit.

If the Tmra is higher than 25ºC, then the manufacturer has the choice of:

An oven is used when there is a specific request or the lab environment is unstable. When testing in an oven, accurately document the oven air temperature, level of oven air circulation, oven humidity, and sample placement. Additionally, an oven is used when the product is temperature controlled as stated in Clause 1.4.12.2 of IEC 60950-1, 2nd Ed. Most test agencies and standards allow both methods.

Testing in an oven is typically exponential, where testing on the bench is typically linear when mathematically corrected.

Table 3 shows the temperature results of an information technology equipment (ITE) product that was tested both on a bench as well as in an oven. 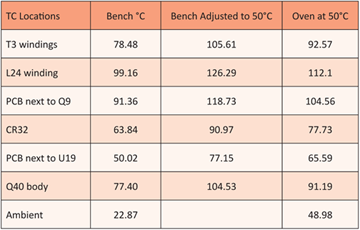 Looking at Table 3, it is clear that testing on the bench and then mathematically correcting the values to the manufacturer’s stated Tmra is much harsher than when it is tested in a heating oven that was set to Tmra.

Another issue that designers sometimes face relating to thermal testing is the terminology used in some of power supply specifications. Some power supply manufacturers use the term cubic feet per minute (CFM), while others may use linear feet per minute (LFM) when a supply requires forced air cooling. CFM is a measurement of volume while LFM is a measurement of velocity. Most fan manufacturers use CFM, while board designers prefer to use LFM as this makes calculating thermal derating curve or power dissipation much easier.

LFM is equivalent to CFM divided by the cross-sectional area of interest.

The larger the cross-sectional area, the smaller the LFM for a given CFM, as shown in the formula below: 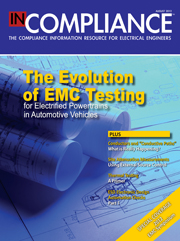