A Voltage or Current Dependent Resistor?

The article title is not a spelling test, but an attempt to explain the properties of the neglected varistor resistance parameter, R. Resistance, in this case, is the varistor voltage at a point in the V-I characteristic divided by the varistor current at that point. 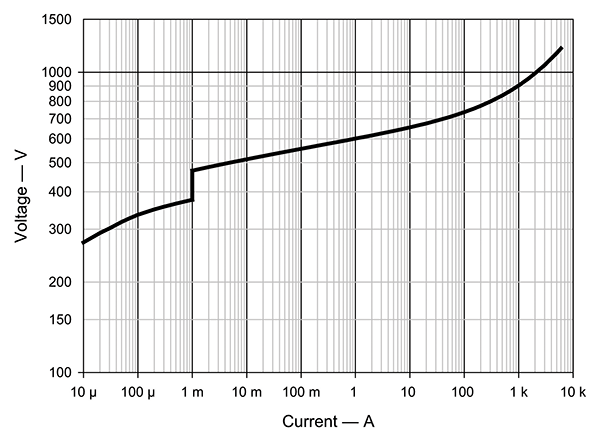 The step was removed by increasing the lowest voltage characteristic by the multiplier of 474/384 = 1.23. Figure 2 shows the result of removing the step and plotting the recorded data points taken as described. 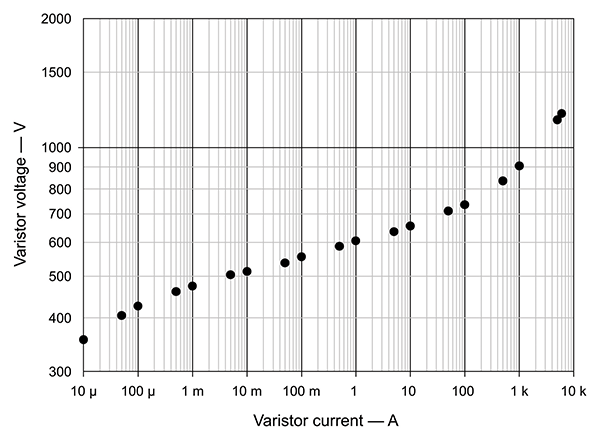 Varistor V-I curves depend on the test current waveform used, a classic case of “It ain’t what you do it’s the way that you do it.” Figure 3 shows the effects of DC, AC, pulse and impulse currents on the shape of the V-I characteristic. At low currents DC is a continuous condition whereas the AC current value will vary over the AC voltage cycle. At high currents the voltage will have a dependence on the impulse rate of current rise. At a given peak current for 1/5, 4/10 and 8/20 impulses, the 1/5 impulse will have the fastest di/dt and, as a result, the highest voltage. These effects need to be born in mind when working from the manufacturers published V-I curves. 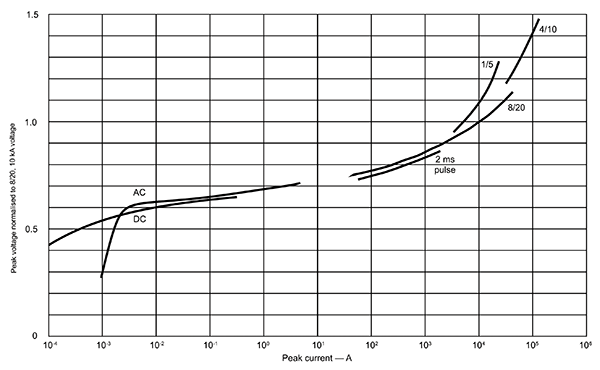 Figure 3: Example of DC, AC, pulse and impulse test currents on the shape of the varistor V-I characteristic 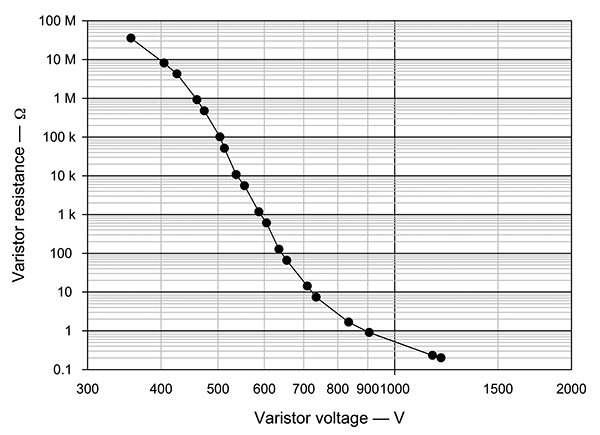 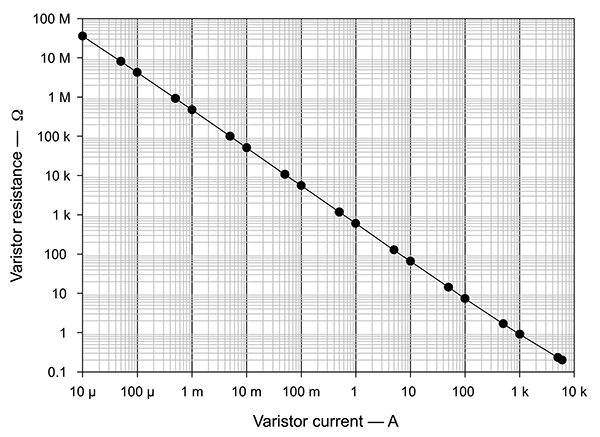 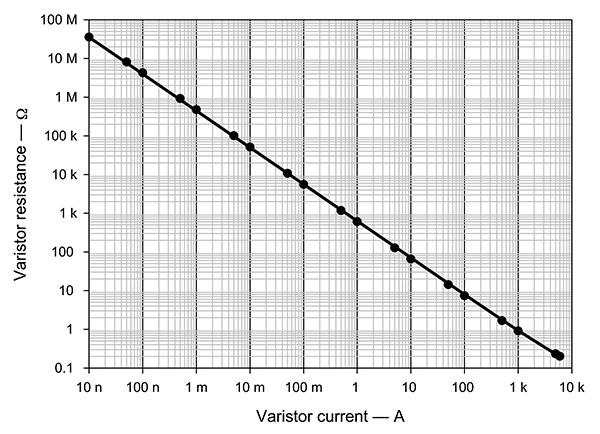 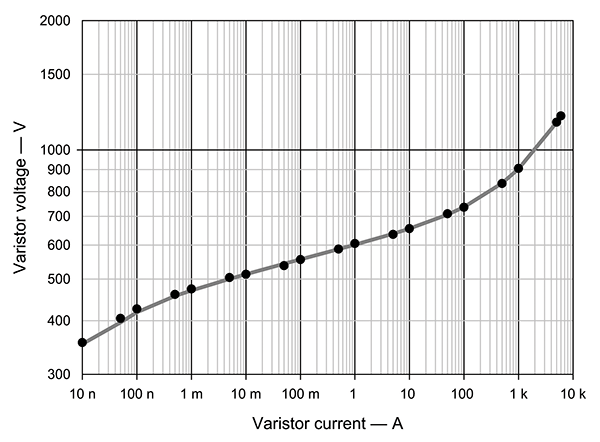 These results are not the full story as factors like di/dt have not been taken into account. Figure 8 shows the di/dt resistance effect on a 100 A peak current pulse initiating with di/dt applied values of 1.25A/µs, 12.5A/µs and 250A/µs. In Figure 8, the varistor resistance is normalised to the 12.5 A/µs value because the current rise time will be 8 µs and hence be similar to the virtual front time of an 8/20 impulse. Plotting di/dt on a logarithmic axis shows the measured values are in straight line with a relationship of RN = 0.9 + 0.4 × LN(di/dt), where RN is the resistance normalised to the 12.5 A/µs value. For the tested di/dt values the varistor R-I characteristic is modified by -9% and +12% depending on the di/dt limit values. 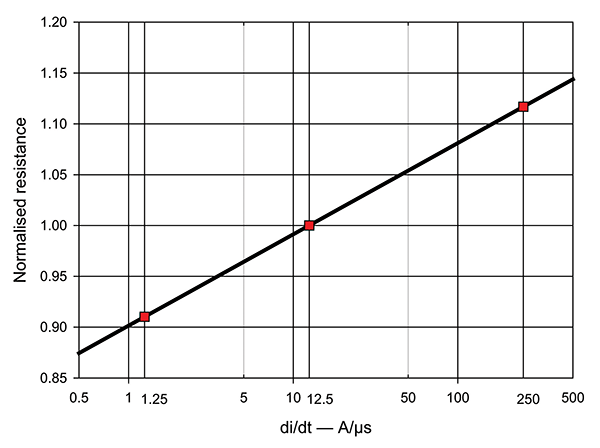 Figure 8: Variation of normalised varistor resistance with di/dt for a peak current of 100 A

component, whose conductance, at a given temperature range, increases rapidly with voltage within a given current range.

Note 1 to entry: Varistor is graphically symbolized as Z.

Note 2 to entry: This property is expressed by either of the following formulae:

Although the term, definition and circuit symbol are technically wrong, these items will not be discussed here. ITU-T Recommendation K.77, Characteristics of metal oxide varistors for the protection of telecommunication installations, solves the problem by using the different term of “metal oxide varistor” rather than “varistor” and gives a completely different definition:

“metal oxide varistor (MOV): non-linear resistor made of a sintered mixture of zinc oxide and other metal oxides whose resistance (R), at a given temperature, decreases rapidly with current (i), and increases with current rate (di/dt), i.e. R = f(i, di/dt).”

Examples of impulse di/dt influence on varistor voltage were given in Figures 3 and 8.

In spice simulation software it is possible to make a fixed resistor into a variable resistor controlled by a function that is dependent on another quantity. We have seen that the varistor resistance is dependent on the current through it and Figure 9 shows the simulation of a varistor connected to a 1.2/50-8/20 impulse generator. The 1.2/50-8/20 impulse generator circuit is reproduced from ITU-T Recommendation K.44. The varistor circuit consists of varistor resistance R2, controlled by the equation at the diagram top, which, in turn, is dependent on the current in series current-sensing resistor R1. Parallel elements representing varistor capacitance, C1, and insulation resistance, R3 are included. The cumulative energy circuit is an add-on to determine the varistor energy. Voltage source, B1, drives resistor, R7, with the product of the varistor voltage, V(N001, N007), and current, I(R1), divided by 1000. Current source, B2, drives the integration capacitor, C3, with the current in resistor R7. Circuit values are dimensioned such that each 1 mV of capacitor C3 voltage represents 1 J of energy.

Figure 10 shows how the Figure 9 varistor voltage varies from positive to negative during the impulse and likewise for the current.

Figure 11 shows that the varistor accumulates energy in two steps; in the positive polarity the step is 107 J and in the negative polarity a further 10 J is added making 117 J in total.

This has been a simple example; the real benefit of an accurate varistor model is when more complex circuits are analyzed. For example, the addition of two more varistors in parallel with the single varistor of Figure 9. When three similar varistors are connected in parallel the lowest voltage one will take most current, set in this case to the maximum single 8/20 rated current of 6.0 kA. Table 2 shows what the individual peak currents and energies would be for three varistors that have the highest, nominal and lowest voltages of a selection. An alternative analytical approach would be to work to a maximum energy criterion as the lowest voltage varistor would develop less energy than the highest voltage varistor at the same rated peak current.

After years of being taught a varistor is a voltage dependent resistor, it turns out to be actually a current dependent resistor with a well-defined resistance-current relationship. Whether the standards makers rewrite their varistor definitions to comprehend this fact remains to be seen. For engineers, the varistor resistance-current equation can be useful in tolerancing circuits containing multiple surge protective components.

Many thanks go to Zhang Nanfa, for mentorship on the “R” in varistor.