Everybody wants to know the derivation of the value of grounding impedance. And, which is the “correct” value?

I’ve asked, and searched, and have never found any answer with a sound technical basis. So, I’ve put together my own answer, which I’ll share with you. This is not a complete treatise on the purpose of equipment grounding; I’m limiting my discussion to the value of the impedance of the ground from accessible metal parts to the point where the power cord ground wire connects to the equipment.

Let’s start with a definition:

Protective grounding is a system whereby

are connected to ground

in such a manner as

to prevent those parts from rendering an electric shock.

(I use indents and line separations in complex statements so that I can separate and identify the modifiers from the essence of the sentence. The statement holds together if you ignore any level of indent. Note here the essence “…grounding is a system whereby parts are connected to ground…” This helps me keep track of the entire idea. I learned this technique from Jerry Hoard who, as he read a complex sentence, would ask: “What is connected? Connected to what? How is it connected? What is the connection doing? What kinds of parts?”)

To do this job, we need some tools: A circuit or schematic diagram, Ohm’s law, and Kirchoff’s circuit laws. And a calculator. And, we need a premise. In this case, the premise is:

of the equipment protective grounding circuit

shall be of such value that,

in the event of a fault,

the voltage at any accessible part

with respect to the supply-circuit ground point

for longer than the time limit value.

Let’s see what we have:

Now, let’s turn to the circuit diagram in Figure 1. To prevent electric shock, we must limit the voltage on the conductive enclosure with respect to the building ground (the floor) to 30 volts or less. We still don’t have enough data to solve the circuit. 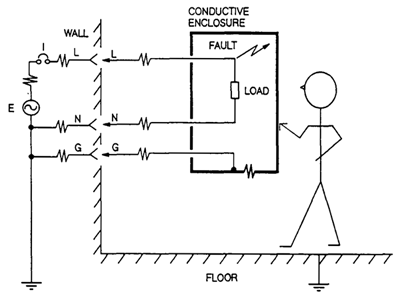 Let’s assume we have 120-volt branch circuit where the overcurrent device is rated 20 amperes. Let’s further assume that the electrical engineer has sized the system so that there is no more than 5% voltage drop within the installation and power cord so that the equipment always gets at least 95% of the nominal system voltage.

With these assumptions, we can simplify the circuit as shown in the schematic diagram in Figure 2. We’ll distribute the 5% installation and source voltage drops between both the Line conductor and the Neutral conductor, giving each 2.5%. Since the Protective Grounding conductor is the same size as the Line and Neutral conductors, we’ll assume it has the same value impedance. 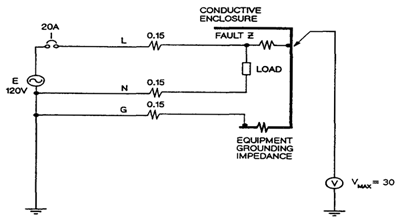 The impedance of the Line, Neutral, and Protective Grounding conductors is given by:

With the circuit we’ve hypothesized, we’ll get one-half the 120 volts, 60 volts, across the protective grounding circuit. Can’t avoid it.

Well, we can’t get 800 amperes from a 20-ampere circuit breaker for very long. The breaker will disconnect real quick — in less than 1 cycle of the ac, which is 16.6 milliseconds long. Since it takes on the order of 200 milliseconds to cause fibrillation, we’ve got a reasonably safe system, roughly equivalent to the protection of a GFCI (ground fault circuit interrupter).

Let’s look at the I – t characteristics of the overcurrent protection device — the circuit-breaker or fuse. The time for operating of a circuit breaker or a fuse is inversely proportional to the square of the current. (This is because fuses and common circuit-breakers are thermally operated, where the power is dissipated in a small resistance, and P is equal to the square of the current times the resistance, I*I*R.) The higher the fault current, the faster the overcurrent device operates. Let’s assume that, if the fault current is ten or more times the rated current of the device, the device operates in one cycle of the ac line current or less.

With a 20-amp circuit breaker, the total circuit impedance should be low enough to allow 200 amps (10 x 20 amps) from the 120-volt supply. The total impedance would be:

Since the L and G wires comprise a total of 0.3 ohms, we are left with the remainder, 0.3 ohms, for the equipment grounding circuit.

What about a fault with an impedance greater than zero?

Again, we must examine the I – t characteristics of the overcurrent protective device. For a thermal circuit-breaker, one allowed corner point is 4 times rated current for no more than 2 minutes. Let’s see what voltage we get when we have 80 amps (4 x 20 amps), 0.3 ohm equipment grounding impedance, and 0.15- ohm installation grounding impedance:

Clearly, the 0.3 ohm value exceeds the 30-volt limit and does not meet our requirements.

Now we can work backward, using the 30-volt value, and solving for the equipment grounding impedance:

The value of 0.225 ohm meets both criteria, namely the case of a fault impedance of zero (maximum equipment grounding impedance which will operate the circuit breaker in less than 20 milliseconds), and the case of a fault impedance of such value as to take the longest time to operate the circuit breaker (4 times rated current). 0.225 ohm might not be the “right” answer. I selected two arbitrary points on the overcurrent device I – t curve:

For all currents less than 2 minutes, the voltage on the accessible conductive parts with respect to building ground will exceed 30 volts.

Perhaps we should choose a value of equipment grounding impedance that, for all times greater than 20 milliseconds, limits the voltage to 30 volts or less.

We said that at 200 amps, the circuit breaker would trip in 20 milliseconds or less. Let’s calculate the value of the equipment grounding impedance which, at 200 amps, would limit the voltage to 30 volts:

As you can see, there is no one answer as to the value of equipment grounding impedance. I have shown that the greatest value probably should not exceed 0.225 ohm for a 120-volt, 20-amp circuit (the most common circuit in the USA).

However, with other assumptions as to the percent voltage drop in the installation, and as to the overcurrent I – t characteristics, one can derive other values for the equipment groundingimpedance. Suffice it to say that values in the range of 0.1 ohm to 0.2 ohm seem to fit the most common cases for 120-volt systems.

The overcurrent device provides protection against electric shock by disconnecting the source in a short period of time.

As can be seen, deciding a single value for equipment grounding impedance is subject to a number of variables — the most significant being the open-circuit voltage and the overcurrent device I – t characteristics.

CSA C22.2, No. 0.4 is unique among grounding impedance standards in that it does not consider the voltage with respect to the building ground, but with respect to the point where the power cord ground wire connects to the equipment. There is some justification for this as this is controlled by the equipment designer whereas the installation is beyond his control. No. 0.4 requires that the voltage drop across the equipment grounding impedance not exceed 4 volts rms at a current twice that of the rating of the overcurrent device. See Figure 3. 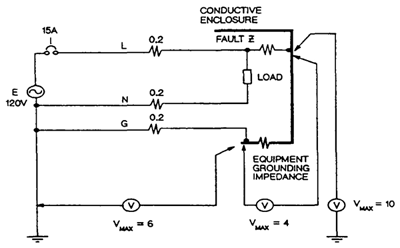 This allows the remaining 26 volts to be dropped across the installation ground wire:

But, the 5% voltage drop limitation requires the installation ground wire impedance to be 0.2 ohm. So, though there is a bit of inconsistency, it is on the conservative side holding the voltage to ground to 10 volts rather than 30 volts.

I am indebted to Robert Ferguson of Unisys (London) for providing the key element in solving the riddle of grounding impedance value: electrical engineers design distribution systems for no more than 5% voltage drop at 100% of rated load.

I am also indebted to Jerry Hoard for teaching me how to analyze and write complex sentences. When I met him he was with the State of Oregon Department of Labor and Industry. 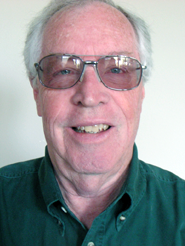 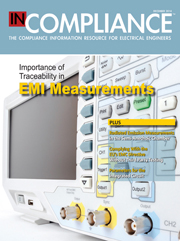