The Standard Handbook for Electrical Engineers: A Timeless Treatise

This month’s In Compliance Magazine features the 2014 Reference Guide, a compendium of resources for engineers, labs, vendors and like-minded professionals with a bent towards a world more in-tune with product harmony. Our industry brings together the micro and the macro, physics-wise, from the zap of ESD— brought to you by the late great Dane Mr. Niels Jonassen, aka “Mr Static”—to the big bang of lightning.

The ladies at ICM, and their expansive list of contributors, work hard each month to bring relevance and context to the world of compliance engineering, with roots that tap deeply into the beginning of our industry with pedigree that goes back thirty-odd years to the DS&G days (not to date the youthful editors of the current publication…).

Speaking of roots, a few years ago, my brother-in-law, who has a penchant for picking up things odd and curious, surprised me with a different sort of reference guide, the Standard Handbook for Electrical Engineers1, printed exquisitely on delicate vellum and bound beautifully with a dark red cover and gold title letters. Versions of this guide have been around for more than one hundred years with the first publication in 1907 (now up to its sixteenth edition). My copy (the Sixth Edition, published 1933) is some three inches thick and is set in a font size that makes me grab my reading glasses. It is to this volume that this month’s Reality Engineering is devoted, for it is the continuity of knowledge that drives the growth and sustenance of the engineering profession. Plus, it was kind of fun to read, both in its quaintness and in its timelessness. 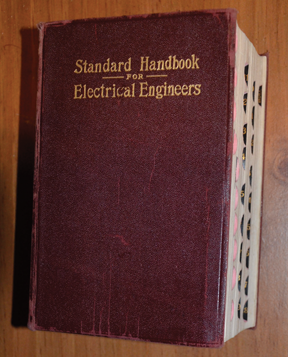 The Arrangement of the Handbook

The Handbook is arranged into twenty-eight sections, with subjects that resonate with early twentieth century engineering and the industrial state-of-the-art. As one might imagine, a heavy concentration on electrical power dominates much of the book. (The transistor won’t appear for another fifteen years after the publication of the Handbook, “electronics” a somewhat nascent term.) A single chapter is devoted to Electron Tubes and Electric Wave Filters and appears in the waning pages of the book, just before the final chapter on Miscellaneous Electrical Applications.

Each Section had a contributor or group of contributors, drawn from industry and academia, many of who were members of the American Institute of Electrical Engineers, forerunner of the IEEE. The illustrations in the book are gorgeous, meticulously drawn and grace nearly every page, attesting to the fine craft of the last century’s draftsmen.

The decibel pops up on page 2,651 (yes, page two-thousand six-hundred fifty-one) in its familiar form:

Telephony was expanding rapidly at the time, Bell Labs was in its infancy and many innovations were being incorporated into the budding nationwide and international communications networks. As wire was strung over land and under the sea, great advances in materials were made.

The use of Loading Coils was common in early telephony. The purpose of the coils was to mitigate line capacitance and intentionally limit the bandwidth along long wired communications. These Pupin coils were “made of toroidal form and inserted in the line as shown.”

As the world went digital, beginning in the 1970s, the higher bandwidth necessary for passing crisp ones and zeros made the redaction of these coils necessary.

Section 26, near the end, covers Radio and Carrier Communication. Seeing as the FCC would not be created until the year following the publication of the Handbook, it is not too surprising that this topic would be subordinate to the many chapters on electric power generation and distribution, illumination and railway applications.

A spark-gap transmitter (now forbidden) is illustrated in schematic form. These devices were spectrum hogs with bit-rates that were dependent on the Morse Code capability of the operators.

There is a description of the use of radio frequency spectrum, whose useful upper frequency was 60,000 kilocycles per second—60 MHz. (The nether-æther above 30 MHz was deemed to be “Experimental and Amateur.”)

Still, television, just a few years old, is described (p 2,517), antenna behavior is discussed (including phase control to achieve directivity) and several sections cover Radio Interference as discussed by Mr. M.D. Hooven, Jr., who states that “New methods of locating radio trouble and correcting it are being developed daily.”

Resolving “Radio Trouble” (nice, I’m going to use this term from now on) continues to the present day and for many readers of ICM, it is our bread-and-butter.

Remedial measures to solve radio interference are broken out according to the source of the noise, including power utilities, street lighting, substations, telephone and telegraph, railways and streetcars. Recommended mitigation from noise generated by the DC-motors on streetcars includes “sanding the brushes…and grounding of any metal conduit through which the line side of the circuit may run usually helps materially. A filter will give added advantage.” (p 2,549). 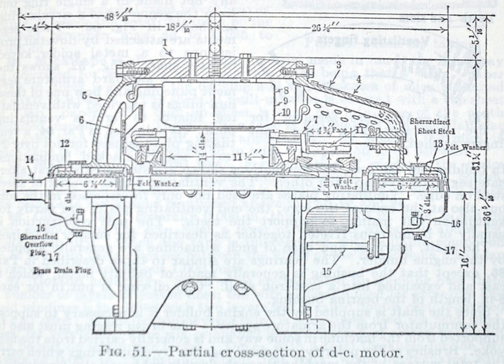 “Everything old is new again” and in homage to Mr. Jonassen, page 95 of the  Handbook picks up the topic of “Transient Currents and Voltages,” referring the reader to Mr. C.P. Steinmetz’s publication on “Electrical Discharges, Waves and Impulses.” It then proceeds to discuss single, double and triple-energy transients and describes the phenomena thus: a single-energy transient equates to a simple discharge of a capacitor (condenser), a double-energy transient involves both capacitance and inductance and a triple-energy transient requires both L and C and a driving force, such as an electric generator, hunting for equilibrium.

Experiments played with “artificial lightning” developing an arc that achieved an impressive 3.6MV. The guy standing next to the discharge seems unusually calm.

The “Telegraphone” is explained on page 2,653, which foretells the invention of magnetic hard disk drive and “is based upon the peculiar magnetic properties of hard steel with permit it to receive and retain magnetic impressions that are fixes in position.” Early applications were for audio recording and ultimately evolved into magnetic tape drives. Later developments in this technology included spools of recording wire that were used in flight data recorders “black box” installed on airplanes beginning in the 1950s.

The Telegraphone was invented by Valdemar Poulsen—another Dane—who gets a page in Wikipedia and would, perhaps, be amused that his image and a brief record of his achievements are now stored, somewhere, on numerous hard drives around the planet. http://en.wikipedia.org/wiki/Valdemar_Poulsen

Pages 2,690-2,704 are devoted to electrical power generation by wind. If anyone thinks that this is a new concept on finds that “Windmill-electric plants have been installed in considerable numbers since 1920 for supplying light and power in small installations inaccessible to the lines of electric supply companies.”

Production of electric power by steam, gas and oil prime movers is covered in Section 10. Page 1,017 shows the cross-section of a Curtis impulse turbine that can generate 35,000 kW of juice. A portion is devoted to the generation by “Hydraulic Prime Movers,” aptly enough, as the Hoover Dam was under construction at the time of the publication of the Handbook.

The book is as much a treatment on natural philosophy and physics as electrical engineering, with troves of data on the physical properties of materials, units, constants, tables of logarithms, fundamentals of oscillation and something called the vector-ohm, which today we refer to as complex impedance, Z. The discussions of the computation of real and complex power are timeless and easily understandable today. 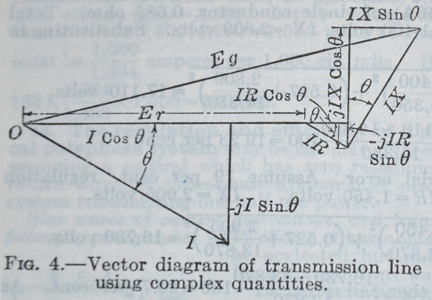 Section 22 covers electric trucks and buses and page 2,212 discusses the development of propulsion systems for busses “the storage-battery operated bus, was used to a limited extent in special service; however, the limited possibilities of the battery as a source of power have doomed this type, so that it is not of sufficient importance for consideration. “

Most of the sections were written by just one or two experts. Section 3, however, on Measurements and Measuring Apparatus have six contributors, perhaps owing to the complexity of measurement techniques. Mr. F. Malcolm Farmer, M.E. is the lead author in this section and was well-accomplished and member of several societies, including the American Institute of Electrical Engineers (where he would come to serve as President), The Institution of Electrical Engineers (in the UK) and the American Society of Mechanical Engineers. He wrote prodigiously and, according to his bio on the IEEE website2 (written in the present-tense, giving his birth date, but not the date he shed his mortal coil), won the Edison Award. His long career included serving as Vice-President of Electrical Testing Laboratories, Inc. (ETL, now Intertek), which was formerly known at the Lamp Testing Bureau.

The section on measurements includes discussion of electric, magnetic, power, mechanical and fuel and gas analysis. A discussion on precision is provided and errors are classified as determinate or indeterminate. Determinate errors include those due to instrumentation errors, “errors due to peculiarities of individuals,” and errors due to faulty methods. Indeterminate errors cover everything else, perhaps a notional nod to Heisenberg. We are reminded, as all measurement uncertainty aficionados understand well, that “every measurement has a definite precision.”  To quantify the un-measureable the author(s) pulls out the probability tools and cites many references.

A faded stamp from the Technical Book Company (phone number GA rfield 2617, though I’m quite certain no one will answer) in San Francisco adorns the first page, so my copy apparently spent some time on the West Coast, perhaps in a public or corporate library or in some long-gone engineer’s personal collection. I believe it was resold at sometime: a handwritten penciled “1-“ on the inside cover indicates that all this knowledge could be had for a buck. I’m not really sure who may have handled this edition over the past eighty-one years. It’s in remarkable condition and, except for the pencil mark and the stamp, no annotations mar the 2,816 pages, none that I could find anyway, so I believe this great compendium of knowledge has been at rest for most of its four-score years. It is now ready to be celebrated. 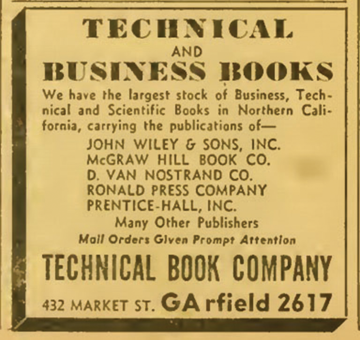 Except for a short paragraph on the specifications of the ‘US Airplane Carriers Saratoga and Lexington’ and ‘US Battleship New Mexico’ it is interestingly free of mention of the application of engineering to war-making. It was 1933. The world was grappling with the worst of the Great Depression, Hitler was just appointed Chancellor of Germany and clouds of great conflicts were gathering on the horizon. However, this volume focuses optimistically and confidently on engineering and industrial brilliance for an America efficiently and smoothly innovating towards modernity.

In any event, this grand book is a timeless engineering tome, still largely relevant for fundamental understanding of electrical engineering principles. As with any great Reference Guide, it is timeless. Let me know if you want to borrow it.