The previous column in this series centered on the International Organization for Standardization (ISO) technical standard for graphical symbols on products and in the workplace, ISO 7010. We explored these symbols, what they mean for your product’s safety, and the latest updates that were recently released. This month, we’re taking on the symbol update process within ISO 7010.

ISO 7010 is an ongoing safety symbol collection standard. ISO Technical Committee 145 (ISO/TC 145) Subcommittee 2, which is made up of worldwide representatives, including the U.S. through American National Standards Institute or ANSI delegates, standardizes symbols, such as those used in product/equipment safety labels, which are then collected in ISO 7010.

During ISO subcommittee meetings, newly proposed symbols are reviewed and updated based on safety best practices and case law. Once the symbol is approved, it becomes part of an amendment to ISO 7010. The standard itself is also periodically revised as a whole. For example, the latest revision to ISO 7010 took place in August 2019, and incorporated each recent amendment as well as additional new symbols.

A Detailed Look at the Process

The process to create new symbols is a thorough one and involves review, feedback and consensus from all delegates of ISO/TC 145. It includes the following (see Figure 1): 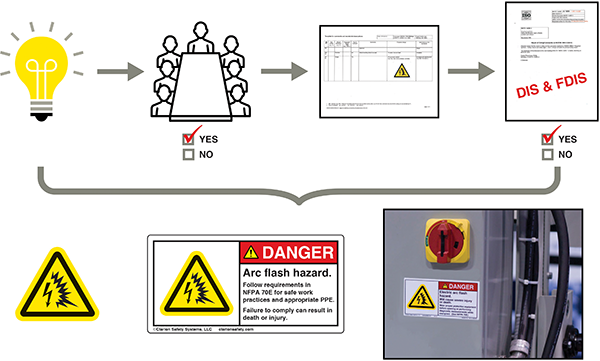 Figure 1: In the ISO symbol update process, a symbol moves from an idea or work item proposal to an initial vote by ISO/TC 145 to deliberate on the symbol. Next steps involve drafts being circulated, reviewed and commented on by the worldwide delegates. If a vote on the draft reaches consensus, it becomes a standardized symbol within ISO 7010 that can be used on warnings, such as on-product labels.

National and international standards are written on three levels:

As such, ISO 7010 is an A-level standard. Another key aspect of ISO 7010 and the symbols it standardizes is that any symbols that are used by lower level standards need to be approved in ISO 7010 in order to be internationally recognized. Why is this the case? As the introduction of ISO 7010 states, “This document is intended to be used by all Technical Committees within ISO charged with developing specific safety signing for their industry, to ensure that there is only one safety sign for each safety meaning.” There are currently several industries and standards committees that are working through this process, either internationally standardizing a symbol or group of symbols.

The Big Picture for Your On-Product Warnings

Why is all of this important for your equipment or product’s safety? Breaking down the process of how symbols are created can help to show why it’s critical to rely on standardized symbols.

“Essentially, ISO 7010 is a living, breathing document. It’s intended to be revised regularly – and to be relevant for today’s manufacturers and for whole industries,” says Angela Lambert, Director of Standards Compliance at Clarion Safety Systems. Lambert is also a delegate representative to ANSI for ISO/TC 145 Subcommittee 2, Working Group 1.

“ISO 7010 symbols are intended to be used where there’s a risk to people. They can appear in safety signs in workplaces and public areas, and as symbols in safety manuals and notices, escape and evacuation plans, and, of course, product labeling. An intelligent, thought-filled process goes into creating these symbols, to ensure better safety for us all.”

This article is courtesy of Clarion Safety Systems ©2020. All rights reserved.