The Internet of Bicycles

China’s homegrown “WeChat” application has nearly 900 million users. Need a car? Pay a check? Send someone some cash? Rate a dining venue? Make a video call? Send an endless series of silly emojis? WeChat is the platform, at least in China. It’s IM, Facebook, Tripadvisor and Skype all in one. And a gateway to to the Internet of Things.

“Are you ready?” Meng Yang ‘Sunny’ pressed the send button and my Xiaomi phone buzzed. It was getting towards 9 a.m. and I hadn’t left the hotel yet.

“Thanks. I’ll be down in two minutes.”

I stepped out of the apartment into the cool Shenzhen morning,: the latitude of this huge city puts it just a shy south of Key West, so January is a very fine time to visit and welcome break from the shiver in Beijing and Washington. The air is pretty good too and Shenzhen is home to the fourth-tallest building in the world, the American-designed Ping An Finance Centre, home of the Ping An insurance company (Ping An: flat, peaceful). This edifice rises from the FuTian district of Shenzhen and soars to 115 stories, just a shade shorter (by 100’) than the Shanghai Tower. Under construction since 2011, the building is getting ready to open for tenants: a small city-within-a-city. 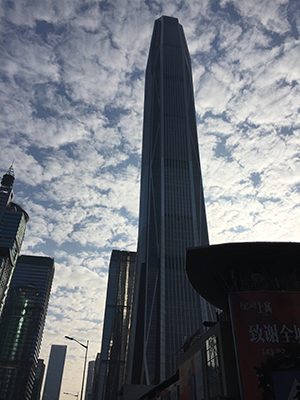 Ping An Building in Shenzhen

My phone buzzed again and Sunny “WeChatted” a map with my location, a photo of the driver, the price for the ride and the license plate number, ending in 2V7. I looked up the street in the direction, scanning the flow of traffic.

Guangdong province is colloquially known as yuè or 粤, which indicates that car is registered in Guangdong province. Chinese-issue license plates indicate the origin of registration by the first character (a Han character) in the license plate sequence. The character for yuè represents the Guangdong or Cantonese origin, “Canton” being the Anglicized name of that province. Other provinces use their own local shortcuts as well. “Jing” is used for cars registered in Beijing, The word “hù” or 滬 is used for cars registered in Shanghai, hù means Shanghai. Other locales use similar shortcuts, which may or may not be immediately recognizable to foreigners. 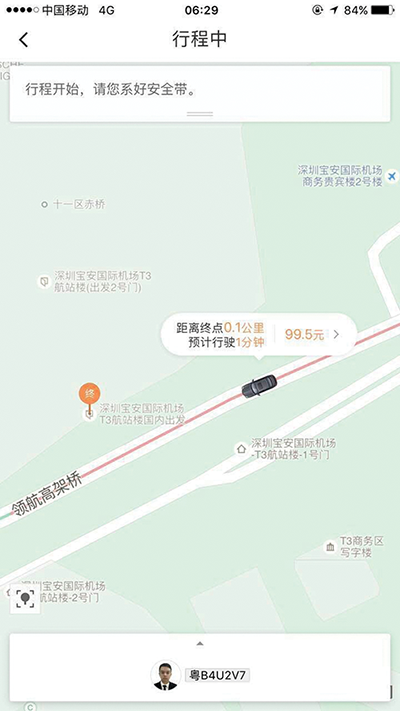 I wasn’t sure how I felt about that, but she was paying for the ride.

Speaking of paying and moving, mobile payment schemes are pretty much near-norm in China and seems to be much more integrated into the society as in the US, anyway. There’s a lot of ways to purchase goods and services and, if you’re in a hurry and have a half a RMB (about 6 cents) you can rent a nice little bike for 30 minutes to get you where you need to go.

Renting a Bike on the Fly

Many cities around the globe have rental bike stations where the bikes are locked into a central station, often near a subway stop. In China and Taiwan, these services have exploded in the just the past year or so. The spin—pardon the pun—is that the bikes are scattered randomly about. You don’t need to go to a designated location to get a ride.

The process is simple: download the app, fund the account (pay a deposit, about US$12), locate a bicycle nearby (the app will tell you how many bikes are in your vicinity and how many meters away the nearest bike is). Once you locate your rental wheels, either scan a QR code and the bike unlocks or a combination sequence is sent to your phone and the bike is unlocked manually. 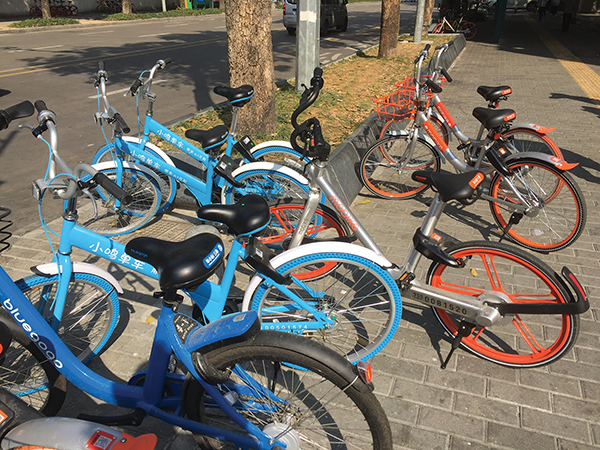 Bike Rentals: A Plethora of Choices

The first method is pretty cool because the bike pairs with the Bluetooth on the phone and the unlock code, sent over the cell network, commands the bike to unlock.

In either case, once arrived at the destination, end the ride on the app, lock the bike manually and walk away. The bike “tells” the system—over your phone connection—where it has been left so the next rider can locate the bike and pedal away.

This remarkable engineering feat is quite amazing—perhaps not as amazing at the Ping-An Tower—but pretty cool. A good “use case” of the IoT: it combines the traditional cell network, mobile pay, a connected “thing” (the bike) and a solution to a problem.

Mike Violette is Director at-large with the EMC Society and supports the EMCS to IEEE’s IoT initiatives. 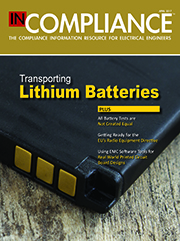