As reported last month, technology transfer and moving of hardware from our New Bern, NC office to the RABQSA Milwaukee office has begun. This process will take place gradually over the next four or five weeks in order that it is not too disruptive to our operations. By the end of August all systems should be operating smoothly in the RABQSA International offices.

For almost the complete month of July, operational and administrative personnel from RABQSA in Milwaukee have been with us in North Carolina getting indoctrinated into the iNARTE systems and procedures. It is expected that the established iNARTE procedures will be maintained in the short term, but as our database management system merges into a new system just coming on line at RABQSA, some streamlining and efficiencies are to be expected.

It is now time to introduce the staff members at RABQSA International who have been training with us in New Bern and who will be your primary contacts after August 2012.

Seated at the computer is Presley Quinn, Administrator, pquinn@rabqsa.com. Behind Presley is Monique Inman, Manager of Operations USA, minman@rabqsa.com. 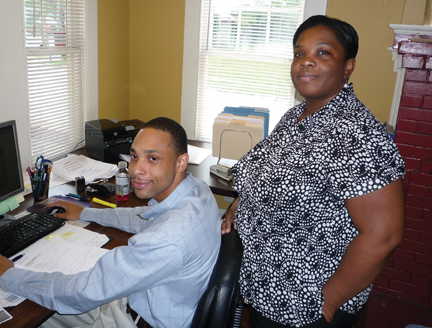 For the next few months Presley will have primary responsibility for the iNARTE FCC Licencensure programs, while Monique will be your main contact for iNARTE certification matters. Kathy and I will still be around for back up, as and when needed.

WHO AND WHAT IS RABQSA INTERNATIONAL?

We are often asked this question since most of the engineers and technicians holding iNARTE certifications will not have encountered their name before. The head of the family from which RABSA International has emerged is the American Society for Quality (ASQ). ASQ had its origins in 1946 when a group of industry leaders formed an association dedicated to manufacturing quality and quality improvement. Their aim was to preserve the significant improvements in manufacturing processes derived from World War II activities.
ASQ grew quickly and their activities broadened to include accreditation of facilities and credentialing of personnel. In order to preserve the integrity of these different operations, ASQ formed a new subsidiary in 1990, the Registrar Accreditation Board (RAB). ASQ retained its global membership, while RAB was created as a non-member governance organization.

It was immediately apparent that a conflict of interest could still exist within RAB, unless separation was created between accreditation and certification activities. Therefore in 1991, the accreditation activity was taken up by a new organization formed in partnership between ASQ and ANSI, the ANSI-ASQ National Accreditation Board (ANAB). This left RAB as a smaller organization with just certification of personnel. A search for a suitable partner for RAB was initiated to promote global growth of their activities, and in 2005 RAB merged with the Quality Society of Australasia, QSA International, an organization that had started in 1992 offering Certification of personnel and having its headquarters in Sydney, Australia.

Today the organization still has ASQ as the overall parent with ANAB and RABQSA as its two subsidiaries. Each subsidiary offers two brands; ANAB provides accreditation under the ANAB brand and also the ACLASS brand, for laboratories operating in compliance with ISO 17025. RABQSA International offers certification brands under its own name and now also under the iNARTE brand. ASQ has approximately 85,000 members worldwide dedicated to all aspects of quality control and quality management.

The certification brands of iNARTE and RABQSA do not conflict; they are complimentary. In the future the differentiation between these brands will generally be that the RABQSA brand will be applicable to personnel engaged in assessing, auditing, inspecting and managing quality and regulatory compliance. The iNARTE brand will be applicable to engineers, technicians and practitioners actually responsible for designing, executing and testing of products and materials, including consulting services. 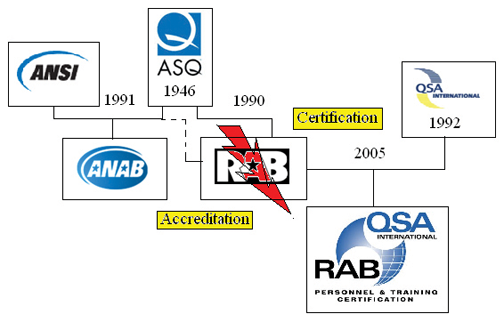 WHERE DO WE SEE CERTIFICATION GROWTH?

Not surprisingly, our most active disciplines today are in EMC and ESD control. Our traditional EMC programs are still the most sought after, although we do have great expectations for our new programs for EMC Design Engineering and Wireless Device Certification. EMC certification interest is highest in Japan where we regularly register over 250 applications each year, of which about 150 achieve certification. ESD certification activity is currently highest in Singapore, Malaysia and Indonesia, with a rapidly developing interest in Korea. Of course, certification activity at iNARTE is due in large part to the dedication and energies of our regional partners in certain countries and may not be a true reflection of actual commercial activity across a larger region.

To our surprise, Product Safety Engineering certification at iNARTE is limited to just Japan and the US markets, with Japan being most active, however lagging far behind their EMC activity. We have been unable to find regional partners or appropriate safety organizations in countries where we would expect there to be interest in
this area.

QUESTION OF THE MONTH

Intermodulation products are a result of which of the following:

A) Motor Brushes that arc when operated in an unshielded area.
B) Mixing of two or more RF signals in a nonlinear junction.
C) Transmitter primary frequencies that mix in linear junctions.
D) Nonlinear junctions rubbing together causing intermodulation.
E) Adding an information signal to a carrier.

The answer is B) Mixing of two or more RF signals in a nonlinear junction.

Intermodulation products are sums and differences of harmonics generated across a nonlinear junction when excited by two or more carriers.

This month’s question is:

A signal with amplitude spectrum shown below 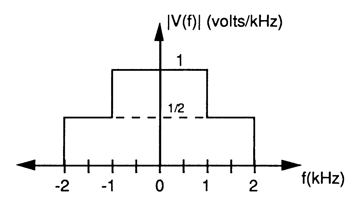 is passed through an ideal lowpass filter with unity gain and 1 kHz bandwidth. The percentage of the input energy appearing at the filter output is ______ . 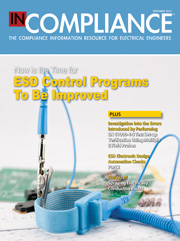