THE DEMOGRAPHICS OF EMC CERTIFICATION

In recent years, iNARTE management has witnessed some dramatic changes regarding the levels of interest in becoming an iNARTE Certified Engineer or Technician. Twenty years ago, when our EMC Certifications were first available, just about all applicants were living and working in the USA, and this has remained the case until last year, 2010. Last year we awarded more new EMC certificates and renewed more EMC certificates to members outside the US. We can now truly claim to be “International.” However, we needed to understand more of the reasoning behind this change because it is not simply the result of movement of manufacturing to offshore locations. Certainly this has something to do with it, but actually the level of interest in EMC Certification in countries to which manufacturing has moved is about the same that we have now in the US. The big game changer has been Japan.

WHAT IS HAPPENING IN JAPAN

In Japan, iNARTE programs are offered through our cooperation with KEC Electronic Industry Development Center. KEC arrange to proctor iNARTE EMC Certification Exams once each year in the month of February. Since February 2007, there have been more than 200 applicants each year, and already there are more than 200 signed up again for February 2011. If the passing rate for 2011 remains about the same, we will have more than 50% of our EMC members in Japan in March 2011. Yet Japanese industry has also moved much manufacturing offshore, so what is different there and what should we learn from these figures? iNARTE has recently spent time in Japan meeting with KEC and representatives of industry to find out.

It came as no surprise to learn that Japanese industry considers their intellectual property to be all important for their future, and that their strategic planning always includes programs for innovation and continuing improvement of products, as well as for the regular introduction of new products. So although manufacturing has moved to regions with lower labor costs, the design and development work, through pre-production and early production, is kept close to home. In order to meet corporate strategic goals, their EMC Engineers and Technicians need to be well trained and employers need to be able to identify the best of the best. We found that there are a number of Centers of Excellence, KEC being one of the best, that offer comprehensive EMC training courses, and employers require that those attending such training demonstrate their knowledge through Certification.

So, iNARTE Certification has become a principal benchmark for EMC career development in Japan. Corporations not only support iNARTE candidates, but many now insist that their EMC departments send their employees through our certification program.

All of this sounds like great news for iNARTE, but given the great support we are getting from Japan, we needed to know what, if anything, we should be doing to better serve their needs. And it turns out that there is something significant that needs to be done that will result in a whole new EMC Certification program that we will offer in 2011. A program that will be developed jointly between iNARTE and KEC and which will be defined according to inputs received from both US and Japanese industry leaders, together with leading academics and independent experts from both countries.

Our current EMC certification program will remain in place unchanged. The new program will be an addition to our offerings and will serve the needs of a significant segment of the EMC industry whose focus is geared to EMC DESIGN and PRODUCT DEVELOPMENT. 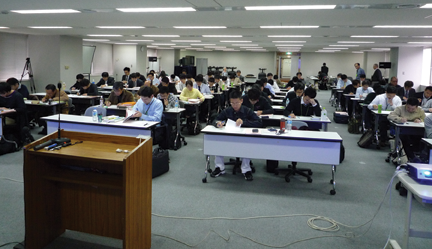 First consider the origins of our current EMC certification program. It began 20 years ago as a result of a request to help the US Navy identify EMC experts able to troubleshoot EMC problems in the fleet. So testing and mitigating engineering were key factors in defining the skill sets for certification. In 20 years the program has developed as EMC focus has moved from military to commercial sectors, but still testing for compliance with standards has been a main feature of the program. EMC design is just one of 26 categories of questions that appear in the current examination. So the current program is in demand because it is the best available, but there is now room for a second program where EMC design is the focus and question categories supporting design skill sets will be featured:

The above categories are still under development and are subject to modification. Many questions from the current program pools will be suitable for use in the new program, but many new pools will be created.
To effect this new program development there will be a Design Development Committee in Japan and another in the USA. The two committees will share their work and the end result will be one coordinated program with a common set of question pools available.

Some other rules for the new program that are now under consideration: 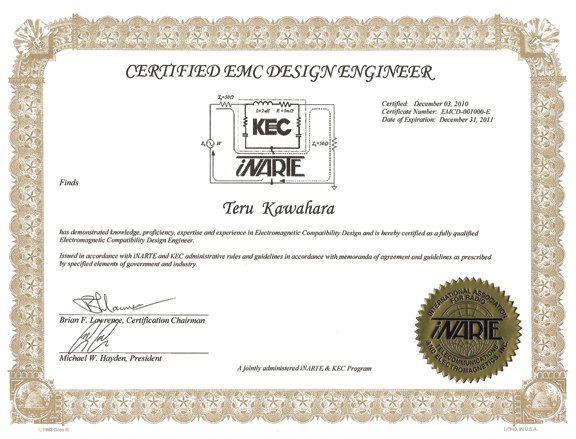 Certificate of proficiency as an EMC Design Engineer
(Draft Concept)

It is anticipated that the first EMC DESIGN ENGINEER certification examinations will be available for EMCS 2011 in Long Beach. Watch The iNARTE Informer here in
IN Compliance each month and visit the iNARTE web site www.narte.org to keep up to speed with the development of this new and exciting program. 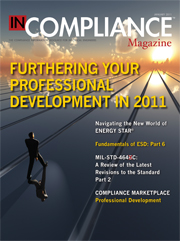