The FCC’s Other Shoe Hits the Floor

My daughter rolls her eyes when I say it, but sometimes things get pretty exciting in the world of compliance engineering.

After causing a bit of a stir in the compliance testing industry in the last few years, the FCC recently defused some tension when they accepted a pair of US-based Accreditation Bodies to accredit laboratories in foreign lands.

As covered in this column over the course of several pieces[1, 2], the FCC subtly rocked the global electronics industry when it overhauled their rules during the fading winter days of December 2014. The “Rulemaking 11652,” released at the apex of the holiday season, spelled out some critical changes in the way electronics devices are tested and approved.

In essence, and in an effort to “up the bar” a bit in the world of compliance and conformity assessment, the FCC required a couple of things: first, all laboratories performing testing to all of its Rule parts had to be accredited. Second, it put a deadline for the termination of the “FCC 2.948” laboratory listing program, that was a very liberal route for electronics manufacturers to test nearly anywhere in the world. Finally, practically speaking, implementation of Mutual Recognition Arrangements (MRAs) no longer held any urgency.

After a “Petition for Reconsideration” was filed by some representatives of the industry, the Commission extended the deadline for cessation of the Part 2.948 listing program to July 12, 2017 and it worked out a procedure for accreditation bodies to apply for FCC acceptance of their programs in non-MRA countries.

Flash-forward to March 23, 2017 and, in a tension-breaking move, the FCC accepted The American Association for Laboratory Accreditation (A2LA) and the National Voluntary Laboratory Accreditation Program (NVLAP) to accredit laboratories operating in Non-MRA Countries. This affects many laboratories in China and other countries that do not have a formal Mutual Recognition Arrangement with the United States.

As of July 13, 2017, the FCC will allow test data from non-MRA countries to be performed at ONLY laboratories that are approved by A2LA and NVLAP. In the future, other Accreditation Bodies may be acceptable, but they must go through an approval process with the FCC. It is notable that China’s government accreditation body has not (as of this writing) submitted an application for approval by the FCC to be accepted for accreditation to the Commissions Rules.

The ABs must evaluate all laboratories to make sure that all of their procedures are up-to-date with the most current requirements. After this has been satisfied, the ABs will notify the FCC. The FCC will make the final determination about the acceptability of laboratories to test to ALL Rule parts of the FCC’s regulations.

The full texts of the announcement are found here:

What this means for the thousands of products that get tested annually in non-MRA countries is that supply chain continuity is maintained. What it also means is that the bar is raised globally because of the enhanced requirement for accreditation.

When I told my daughter about this exciting news, she sighed, looked with pity at me and said “Dad, you need to get a life.” 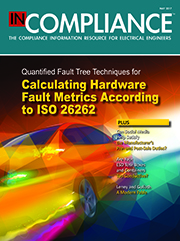