The Effect of the FCC’s New Rules on Testing Laboratories

The Federal Communication Commission (FCC) ended 2014 with an overhaul of its Rules for device testing and certification. While everyone was getting ready to pop the champagne, the Commission released its long-anticipated “Rule Making 11652” on December 30, 2014. It was an uncorking that echoed around the world, most notably in the ears of our testing laboratory friends overseas.

In short, it may spell the end of testing for FCC compliance for hundreds of laboratories.

The stated reason for the new Rules is to update certain procedures for device certification and to “facilitate the continued rapid introduction of new and innovative products to the market while ensuring that these products do not cause harmful interference to each other or to other communications devices and services.”1 However, these changes will potentially affect billions of dollars of global trade in electronics in a very big way.

By implementing certain specific goals outlined in the preceding Notice of Proposed Rulemaking (NPRM) issued in 2013, the Rule changes that have been enacted jeopardize the recognition of testing laboratories in countries that do not have a mutual recognition arrangement (MRA) with the U.S., notably China, Malaysia, Brazil, India, Mexico and Thailand. Beginning sometime in 2016, data submitted by testing laboratories based in those countries will no longer be recognized by the FCC. As it now stands, electronic device manufacturers in those countries may have to find other ways to obtain the testing required for FCC approval.

The FCC partly privatized its Certification process in the year 2000 at the dawn of what would be an explosion of wireless device innovation and development. As of the writing of this piece, approximately 233,000 entries2 have been made in the past 15 years or so in the FCC’s Certification database, reflecting an astonishing array and diversity of products used for communications, entertainment, health, safety, energy and other critical areas of our modern lives. The pace is accelerating.

The globalization of research and development as well as manufacturing occurred during this same period. Taiwan, Korea and Japan were already largely invested in electronics development at the time of the FCC’s original action. But, in the year 2000, China was just getting started on its high-technology race to the top.

Since the inception of its Equipment Authorization program, the FCC has historically accepted test data from any laboratory that complied with the minimum facility reporting requirements under Part 2.948 of the FCC’s Rules. Reporting requirements included a description of the laboratory, information on its site attenuation characteristics, photos and a list of equipment. Testing laboratories from all over the globe that submit this information to the FCC are referred to as “Listed” laboratories, and their names are published on the FCC’s website. This was a practical approach before the days of accreditation when the industry was evolving, and quite liberal when compared to some other regulatory regimens. However, several forces have changed the Commission’s view of this process, making the Listing of testing laboratories become a thing of the past.

MRAs allow the free exchange of test data between countries (“economies” in MRA parlance). MRAs also form as a basis for Certification Bodies to be designated outside the U.S. They are also a key element in the acceptance of a Declaration of Conformity under
Part 15 of the FCC’s Rules. For the most part, the MRA process has worked well and allows product developers to test locally and sell internationally.

However, because the FCC’s process allows acceptance of test data from anywhere, the benefits of this liberal system can be enjoyed even by testing laboratories based in countries that do not have an MRA with the U.S. As a result, it has created an uneven playing field for testing laboratories and, by extension, their customers.

Along with the FCC, various U.S. government agencies have actively worked to establish working MRAs with numerous economies, some with great success and progress and, in other cases, not so much. Frankly, this has been the source of some frustration in and around the industry and with regulatory bodies as well.

So the changes promulgated in the FCC’s new Rules will affect several hundred testing laboratories based outside the U.S. in non-MRA partner economies. The specifics are embodied in the summary of the Commission’s Report and Order implementing the new Rules, wherein the FCC will “…require accreditation of all laboratories that test equipment subject to any of the certification procedures under Part 2 of the Commission’s rules…”

The real issue is what accreditations will the FCC accept. This is a crucial issue for those testing laboratories that will lose their status as FCC Listed laboratories. The answer to this question is found in Section 48 of the Report and Order, which states that “the current rules allow for the recognition of accredited testing laboratories in countries with which there is no operational MRA with the United States,” but (and it’s a big “but”), “the Rules do not provide a process for such recognition.” And there are no current plans to address this issue.

The FCC’s rulemaking raises several time-critical issues. At present, the new rules have not yet been published in the Federal Register, which is the first step in the implementation of the new requirements. Once the rules are published, a one-year countdown begins on the dissolution of the Listing program. This short timeframe could leave many busy testing laboratories high and dry. The way around this issue would be for the FCC to develop a formal process for officially recognizing testing laboratories, but the Commission has indicated that they are not currently working to develop such a recognition program.

So, how will this coil unwind? Well, for starters, non-MRA countries could get back to serious negotiations and execute MRAs with the U.S. This is a good idea, but probably not realistic given the limited amount of time. Another scenario is that the FCC allows existing testing laboratory listings to expire without further action, resulting in testing being redirected to countries with an MRA. This would this be a windfall for testing laboratories in those countries but devastating for incumbent testing laboratories in non-MRA economies. A more likely scenario is that the electronics industry will apply political pressure to exact a more reasonable solution, one that doesn’t increase the time and cost for product testing and approval.

So stay tuned. Something has to give. 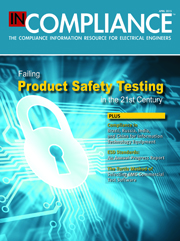