This article is an update on the status of the ANSI-ASC C63® Committee on EMC (the C63 Committee). The C63 Committee is primarily a North American committee with a history dating back over 80 years. The Committee specializes in developing electromagnetic compatibility (EMC) engineering standards with an increasing emphasis on standards relative to wireless devices. The C63 Committee meets twice a year at various locations in the U.S. There are numerous meetings of Working Groups in the Committee via electronic means in the time-intervals between face-to-face meetings.

The origin of the C63 Committee is still being researched. However, we do know that it was in existence in 1936 as an article published in the Industrial Standardization and Commercial Standards Monthly, Volume 8, Issue 3 (March 1937 – 61 -67) indicated. The appropriate article was “Standards Committees Report Progress on Important Electrical Problems.” It was reported that the “Radio Electrical Coordination Committee (C63), which is administered by the Radio Manufacturer’s Association, was very actively submitting materials to the international standards associations, especially CISPR, on behalf of the USA.”

Organizational Aspects of the C63 Committee

The Subcommittees that report to the Main Committee include:

Working Groups report to the Subcommittees. Each Working Group is responsible for one standard.

This new standard was published January 15, 2016. It represents a culmination of over four years of efforts by a Working Group led by Art Wall.

The general Introduction to the standard says:

“It does not include limits or station licensing requirements. It also does not consider test methods for requirements specific to maritime and aviation transmitters, ground based radars, satellite communication equipment, fixed microwave equipment, or broadcast transmitters. This equipment may be covered in future revisions of this standard. In addition, this standard does not include evaluation methods for transmitters subject to regulatory requirements concerning human exposure to RF energy; RF exposure conformity assessment methods are given in other standards.”

The body of the standard contains test methods covering:

The annexes of the standard are loaded with important information.

It is expected that the FCC will adopt C63.26 and it will be “incorporated by reference” into the FCC rules. The Canadian government has already adopted the standard and it is part of their regulatory environment.

This standard was published 29 January 2016. The Working Group that developed it was chaired by Poul Andersen. The Working Group started with the 2007 version of the Recommended Practice and made some significant changes to it for this latest edition.

This standard provides a rationale and recommendations for developing emission limits and immunity test levels; it is called a recommended practice. The limits and levels are representative of current practice and user needs.

Emission limits are specified by national and international standards bodies. Emission limits are typically regulated and hence controlled, which is the case in the U.S. and Canada. Such regulatory limits take precedence, even if the limits are different from those considered in this document.

Unlike some parts of the world, EMC product immunity is not regulated in the U.S. and Canada except for some types of safety equipment. Thus, adequate EMC immunity is more a quality aspect of the product because, if it does not operate in its intended radio frequency (RF) environment, the user would deem it of poor design and quality. The EMC immunity test levels described in this document are representative of common levels applied internationally. However, severe environments (in which levels of electromagnetic disturbance are high) require the consideration of applying higher test levels. This consideration is described in this recommended practice. Finally, it should be noted that the entire recommended practice does not contain normative requirements; as such immunity levels are not universally required.

The Recommended Practice contains only one Annex, an Informative Bibliography.

Standards approaching completion within the coming year include the following:

Standards published in 2015 and 2014 include the following:

The C63 Committee has been around for over 80 years. It published its first standard, C63.1, in 1946. The Committee continues to develop and revise standards in the EMC engineering and wireless device arenas. The standards are used world-wide and are used by government bodies in the U.S. for regulatory purposes. 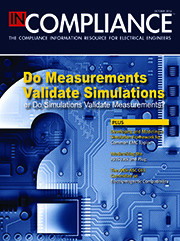