The Main Committee is organized in a top-down fashion, although the standards development is actually done by the lowest-level (working group) and then approved by higher levels of the Committee’s organization. The highest level is the Main Committee, currently Chaired by Dan Hoolihan.
The Vice-Chair is Dan Sigouin, the Treasurer is
Mike Windler and the Secretary is Jerry Ramie.

The Main Committee is supported by eight subcommittees. The subcommittees (with their respective chair-persons) are: shown in Table 1.

Each subcommittee has several working groups reporting to it and each working group has responsibility for one standard. The standards that are developed are considered to be American National Standards. They imply a consensus of those parties concerned with its scope and provisions. An American National Standard is intended as a guide to aid the manufacturer, the consumer, and the general public.

The procedures of ANSI require that action be taken to reaffirm, revise or withdraw standards
no later than five years from their date of publication. Our Main Committee’s goal is also to develop new standards as appropriate. In 2017 and 2018 we have published two revised standards (C63.5, C63.15), published one new standard (C63.27), and amended one of our long-time standards (C63.4).

In the Overview of the standard, it states:

(Note – The Main Committee utilizes the Institute of Electrical and Electronic Engineers (IEEE) – Standards Association to publish its standards and they are dual-coded to indicate the standards also meet IEEE criteria; that is, they are ANSI/IEEE standards.)

This was the first Amendment to a C63 standard in the 80 plus year-history of the Main Committee. The Abstract of the standard states:

“United States consensus standard methods are specified in Annex D of this amendment for validating standard test sites and alternative test sites used for measurement of radiated radio-frequency (RF) signals and noise emitted from electrical and electronic devices in the frequency range of 30 MHz to 1 GHz. In addition, various updates are made to equations in 4.5, Annex F, Annex G, and Annex N.”

Also, a change to the value of the distance between the receiving antenna and the equipment-under-test was made which returned it to what it was in previous editions of C63.4.

The more significant updates to Annex D consisted of the following:

Changes from the previous edition include several text corrections, a new sub-clause to provide free-space correction terms for tuned dipole antennas, and another new sub-clause for requirements of frequency spacing. These were added along with a sub-clause and an annex on the use of time-gating to determine free space antenna factors (FSAFs) above 1 GHz.

Other items that were changed are additional details for horn antenna calibration requirements, addition of an equation and associated details for “vertical max Ed” in Annex A, clarifications/updates to the symmetry measurement for antennas used from 30 MHz to 300 MHz, an expansion of allowable reference antennas, and expanded information about estimating measurement uncertainties.

The standard provides procedures for the determination of antenna factors (AFs) for antennas used in radiated emission measurements as described in ASC C63® measurement documents. It is important to note that these AFs shall be used for either vertically polarized or horizontally polarized measurements at distances from the EUT of 3-meters or more. The general measurement conditions and parameters for antenna calibration and characterization are covered in the main body of the standard.

Table 1 in the standard gives a summary of antenna types and the calibration methods used for product measurement and normalized site attenuation (NSA) measurement purposes.

(Note – The three most commonly used antenna calibration methods are detailed in the standard:

“Abstract: An evaluation process and supporting test methods are provided in this standard to quantify the ability of a wireless device to coexist with other wireless services in its intended radio-frequency (RF) environments.”

The Introduction of the standard states:

“The proliferation of radio-frequency (RF) wireless devices has been both explosive and pervasive in virtually every field in our society. The everyday use of wireless devices goes well beyond the early handheld walkie-talkies, introduced in the 1950s.

“It is estimated that cellular telephones outnumber individuals in the US population and other countries have even higher penetration rates for cell (mobile) phone usage.

“These risks must be carefully evaluated and managed. As wireless technology is integrated into systems that require high degrees of reliability, such as medical devices, aircraft, and nuclear power plants, it is imperative that risks be quantified, mitigated, and managed to be at or below acceptable levels. Verification of the risk control measures associated with the following two areas are of interest to this group: 1) traditional EMC and 2) coexistence.

“Traditional EMC testing is designed to exclude frequency bands where the device under test communicates wirelessly. Coexistence testing focuses on devices and systems that intentionally use wireless and it extends beyond traditional EMC to examine the device’s performance in frequency bands where it uses wireless communication. This standard provides methods for evaluating the ability of a device to coexist in its intended RF wireless communications environment.”

The subject standard specifies methods for assessing the radio frequency (RF) wireless coexistence of equipment that incorporates RF communications. It specifies key performance indicators (KPIs) that can be used to assess the ability of the equipment under test (EUT) to coexist with other equipment in its intended operational environment.

“Co-existence” has a complex definition in the standard:

“coexistence: (A) The ability of two or more spectrum-dependent devices or networks to operate without harmful interference. (IEEE STD 1900.1-2008 [B28]) See also: interference. (B) The ability of one system to perform a task in a given shared environment where other systems have an ability to perform their tasks and may or may not be using the same set of rules. (IEEE STD 802.15.3-2016 [B29]) (C) A state of acceptable co-channel and/or adjacent channel operation of two or more radio systems (possibly using different wireless access technologies) within the same geographical area. (IEEE STD 802.16-2012 [B30]) (D) A situation in which one radio system operates in an environment where another radio system having potentially different characteristics [e.g., radio access technology (RAT)] may be using the same or different channels, and both radio systems are able to operate with some tolerable impact to each other. (ETSI EN 303 145 V1.2.1 [B17]) Syn: RF coexistence; wireless coexistence.”

A closely-linked document has been published by the American Association of Medical Instrumentation (AAMI); it is AAMI-TIR 69:2017 Risk Management of Radio-Frequency Wireless Coexistence for Medical Devices and Systems. The ANSI document is the “test methods” standard while the AAMI standard is the “risk-assessment” aspect of the coexistence challenge.

The Working Group working on this guide is reviewing Annex B of the Engineering Practice Study published in 2001 by the Department of Defense/Industry E3 Standards Committee chaired by DISA/Joint Spectrum Center. The WG is attempting to compare Military EMC standards with more generalized versions of commercial EMC Standards to arrive at “practices” that represent the best of both the commercial and military worlds.

The Abstract for this standard says:

“United States consensus standard methods, instrumentation, and facilities for measurement of radio-frequency (RF) signals and noise emitted from lighting equipment in the frequency range from 9 kHz to 40 GHz are specified. This standard does not include generic nor product–specific emission limits. Where possible, the specifications herein are harmonized with other national and international standards used for similar purposes.”

This draft standard is intended to include procedures for compliance testing of several different types of wireless power transfer (WPT) products with applicable electromagnetic compatibility (EMC) and radio-frequency (RF) regulatory requirements. Test procedures will focus on radiated field and conducted measurements and may reference established standards. WPT RF exposure compliance procedures will not be included, although standards pertaining to laboratory electromagnetic field (EMF) safety may be referenced.

WPT testing methods may consider, but are not limited to, large in-situ installations, charging systems for electric vehicles (including impact of host on electromagnetic fields), household appliances, and desktop chargers. Consideration will also be given to appropriate testing distances and test locations (such as semi-anechoic chambers, open area test sites, ground plane, and earth sites). Related national and international standards (e.g., CISPR, SAE, etc.) will be reviewed and used to the extent possible.

This standard is intended to include procedures for compliance testing of traditional ISM with applicable radio regulatory requirements. Related national and international standards (e.g., CISPR, IEEE) will be reviewed and used to the extent possible.

It is anticipated that this standard would replace the current FCC/OET MP-5 – Methods of Measurements of Radio Noise Emissions from Industrial, Scientific and Medical equipment (February – 1986)

The ANSI-ASC C63® Committee on EMC has been in existence for approximately 80 years (we are still researching our actual start date) and has been contributing to national EMC technical issues for that period of time. Initially the Committee was focused on specifying parameters for radio-frequency receivers. Over time, the committee’s emphasis switched to testing
methods and testing environments and how to determine
and characterize both of those technical issues.

About 30 years ago, the Committee responded to a request from the FCC to develop a test methods document for Part 15 devices. The Committee responded by revising and modifying C63.4 – Methods of Measurement of Radio-Noise Emissions from Low-Voltage Electrical and Electronic Equipment in the Range of 9 kHz to 40 GHz. This document was incorporated into the FCC Rules and it replaced FCC/OET
MP-4 – FCC Procedures for Measuring RF Emissions from Computing Devices (July -1987).

A second reason for the existence of the C63 committee is to develop EMC techniques which utilize the latest electronic technology in EMC test equipment and take those new techniques to the international standards bodies for incorporation into EMC standards used world-wide. No other U.S. committee can match the technical strength, cumulative experience, and diversity of the C63 Committee. Technical members of the committee include Ph. Ds and Master degree holders and other highly educated engineers and scientists. Some members of the committee have over 50 years of experience in EMC and electrical engineering. The diversity of the committee includes industrial corporations, trade associations, testing laboratories, calibration laboratories, government bodies and individual EMC consultants.

For more information on this famous U.S. EMC Committee, check out their website www.c63.org. 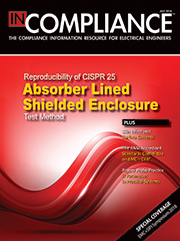