Note: This technical tip assumes a basic familiarity with the injection of audio frequency ripple on equipment input electrical power in accordance with such standards as MIL-STD-461 CS01/ CS101, RTCA/DO-160 section 18, and ISO 11452-10 (preceded by SAE J 1113/2) (References 1-8). 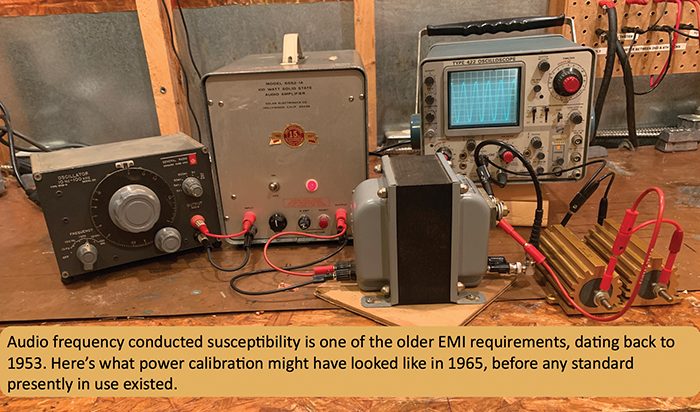 This technical tip presents safer ways of performing audio frequency conducted susceptibility testing than the standard approach described in References 1-8. “Safer” here means reducing the probability of accidentally damaging the test article, either by over-testing, or by inducing instability in the test article’s internal switched mode power supply, or by causing a shutdown of the audio amplifier resulting in possible instability in the test article internal switched mode power supply.

These are always important considerations, but especially so when the test article is a one-of-a-kind item whose delivery is on the program schedule critical path. Finally, the stability issue is most pronounced when the test article runs off a dc bus, because dc/dc converters tend to have much smaller hold-up capacitors out front than if the cap providing the hold-up function also has to smooth out ripple from a 50/60/400 Hz ac bus.

A prime example of a sensitive load running off a dc bus is equipment used on spacecraft and launch vehicles. Further, such may be one-of-a-kind items where the actual flight unit is being EMI qualified.

Another difference between References 1-5 and spacecraft derivatives is that the spacecraft derivatives tend to compute a power limit based on the dc voltage limit, whereas MIL-STD-461 CS01/CS101 use the power from the higher ripple limit for higher potential (ac) buses. This results in the use of amplifiers of at least 100 W output, and often 300 W or higher. Further, many such amplifiers have quite low output impedances, so that they can deliver much more than the pre-calibrated power if the input impedance of the test article dips below 0.5 Ω. To promote safety, it is advisable to use no more power than is absolutely necessary and to have an output impedance of around 2 Ω (which transforms to 0.5 Ω across the coupling transformer windings).

Solar Electronics used to supply audio power oscillators and amplifiers with a 2.4 Ω output impedance, but they no longer sell audio sources or amplifiers. When using an amplifier with (typically) lower output impedance, additional resistance may be added in series between the amplifier output and the input to the primary side of the coupling transformer. This protects the test article from excessive input ripple current but also protects the amplifier itself from a short-circuit condition that could cause protection circuitry to trip. When an amplifier shuts down to protect itself, it can actually damage the test article because, if the primary side of the coupling transformer is open-circuited, the secondary side looks like a one millihenry inductor in series between the power source and the test article (Reference 1, page 33-34). If the test article has insufficient capacitive decoupling in front of its dc/dc converter, it can go unstable, drawing too much switched mode current through the coupling transformer secondary. This has caused damage to (space) flight hardware power supplies.

In this tech tip, two approaches to protecting against such problems are explored. One uses a low rather than high-power amplifier, and the other technique inserts an attenuator between the output of a high-power amplifier and the coupling transformer primary. The attenuator prevents too much power in the event of an operator error, but also places an effective 2 Ω resistance across the primary of the transformer even if the amplifier goes open so that the test article will never see more than 0.5 Ω inserted between itself and the power source on account of the coupling transformer.

This approach is limited to the spacecraft-like case where the ripple limit is very low relative to the heritage limits found in References 2-5. Note that Reference 9, which represents a tailoring of MIL-STD-461 for equipment-level EMI testing, already has a low 1 Vrms limit.

Figure 1 shows a Siglent SPA1010 10 W dc – 1 MHz amplifier in a CS01/CS101 pre-calibration measurement (see Note 11). This amplifier has 15 kΩ input impedance and very low output impedance (specified to be less than 2 Ω, but in fact measured closer to 10 mΩ). The SPA1010 amplifier is protected against both thermal and input/output overload and initially was quite touchy. When it shuts down to protect itself, that poses a hazard to the test article. Figure 2 shows thermal and overload problems successfully addressed, with the amplifier able to operate at full power (meaning 1 Vrms across a 0.5 Ω load, not full amplifier power) for hours at a time. This amounts to 40% of the amplifier’s total 10 W rated output.

Comparing Figure 2 to Figure 1, we see lead weights on the amplifier, and 2 Ω (2 each, 1 Ω, 10 W power resistors – series resistors more visible in Figure 3) placed in series between the amplifier output and the primary side input of the Solar Electronics 6220-1 coupling transformer. The lead weights, in addition to pressing the amplifier down against the copper ground plane and heat sinking it that way, also added thermal mass in their own right and were mildly warm to the touch after several hours of full (CS101) power operation (see Note 12). The 2 Ω in series between amplifier and coupling transformer ensures that the amplifier sees a minimum 2 Ω load even when a dead short is placed across the transformer secondary output. The amplifier can operate into 2 Ω all day at the tailored 1 Vrms limit level.

Figure 3 shows a fix to ensure that the amplifier shutting down does not insert a millihenry in series between the dc power source and the test article power input. The amplifier’s output is shunted by a resistor value high enough to not load the amplifier, but low enough to adequately short out the secondary side inductance when reflected across the transformer windings. A 10 Ω, 3 W resistor was selected for this purpose. Looking back from the secondary side, the impedance seen is 2 Ω in series with 10 Ω shunted by the amplifier output and reduced by the square of the turns ratio. If the amplifier is out of the picture, there is 12 Ω across the primary, which reflects across as 3 Ω. That should be low enough to not cause instability in the test article.

Figure 4 shows verification that a load powered through the Solar 6220-1 coupling transformer with amplifier disconnected from the primary sees under 3 Ω series impedance. The HP 4328A milliohmmeter is ideal for this measurement as its output potential is 1 kHz ac, instead of the more typical dc potential of ohmmeters and millohmmeters. A dc milliohmmeter can only read the resistance of the transformer’s secondary winding. The measured value of just under 2.5 Ω is due to the shunting effect of the secondary winding inductance in parallel with the reflected 3 Ω off the primary side. 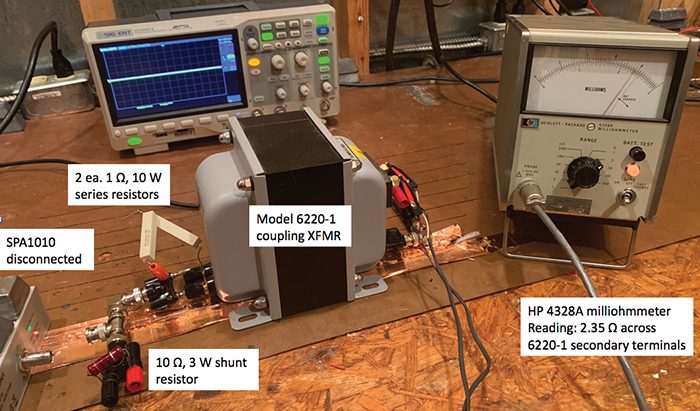 Figure 5 shows a typical set-up as per References 1–3 and 6–9 that can dissipate 50/80 W in a 0.5 Ω load, with the addition of an attenuator between the amplifier and the coupling transformer.

The attenuator was designed for this specific application. Several purposes factored into the design, as follows:

Attenuate high power output so that an error would not inject significantly more ripple into the test article than desired;

Provide a well-behaved load for the amplifier regardless of test article impedance so that it does not nuisance trip and cause the test article to see a high impedance reflected across transformer windings; and

Provide a low and near constant inserted transformer secondary impedance as seen by the test article.

If the limit is such as might be found in References 3–8 but the amplifier’s maximum output is much greater than 80 W, the attenuation may be based on that ratio. For this technical tip, the limit is as per reference 9 (1 Vrms) and the amplifier is capable of delivering 100 W into a 2 Ω load. Based on this and the above considerations, the attenuator was designed to symmetrically match 2 Ω on input and output and provide a nominal 9 dB attenuation. (Attenuator design details may be found in the Sidebar of this article.).

The proof of the pudding is a repeat of the previous measurements made using the HP 4328A milliohm meter with a 1 kHz ac source signal. The impedance looking into the coupling transformer secondary was measured as a function of the resistance across the input to the attenuator that is connected to the coupling transformer primary. The attenuator input was sequentially open-circuited (as if the amplifier were disconnected, unpowered, or tripped off), connected to a matched 2 Ω (simulating the amplifier’s active output resistance), and then short-circuited.

Table 1 makes it clear that the attenuator is performing the function of making impedance mismatches look much closer to an impedance match, as does any attenuator properly matched to source and load impedances.

The attenuator only allowed the achievement of a 1 Vrms level across 0.5 Ω through the coupling transformer to just above 100 kHz. At 150 kHz, only 875 mV could be achieved, which is 1.2 dB too low. This is an artifact of the use of this particular amplifier but also the attenuator performance (detailed in the Sidebar). Had the attenuator performance been perfectly flat, the 1 Vrms level could have been achieved out to 150 kHz. That being said, this amplifier and the coupling transformer have a high-frequency roll-off such that the maximum unattenuated 150 kHz output across 0.5 Ω through the coupling transformer is about 5 dB down from the 1 kHz 100 W rating. With a higher powered and/or flatter performance amplifier, this condition would not have occurred.

Injection of audio frequency ripple onto power lines requires direct attachment to said power lines and the insertion of considerable series impedance in the form of a transformer secondary. Additionally, typically available test equipment can inject much higher levels of ripple than necessary in many applications. Both these conditions can result in damage to the equipment undergoing qualification. If that equipment is of high value, due to cost and/or the schedule impact of damage, then either of the two approaches described herein should be considered to remove those sources of program risk.

The attenuator’s purpose is to:

Attenuate high power output so that a test operator or software error would not inject significantly more ripple into the test article than desired;

Provide a well-behaved load for the amplifier regardless of test article impedance so that it does not nuisance trip and cause the test article to see a high impedance reflected across transformer windings; and

Provide a low and near constant inserted transformer secondary impedance as seen by the test article.

Based on these concerns, a 100 W amplifier and a 1 Vrms limit across 0.5 Ω, the attenuator was designed to provide a bidirectional symmetrical match to 2 Ω and attenuate so that it could provide an output of 2.5 V across 2 Ω when a 50 W power amplifier with an output impedance of 2 Ω was driving it (~12 dB). 9 dB was selected to allow 3 dB headroom. Because the amplifier was actually rated for 100 W mid-band (1 kHz), a fuse was incorporated in order to avoid having to choose attenuator component ratings for the higher power.

The only other design consideration is whether a symmetrical “π” or “T” configuration will be chosen. Figure 6 shows π- and T-circuit configurations. 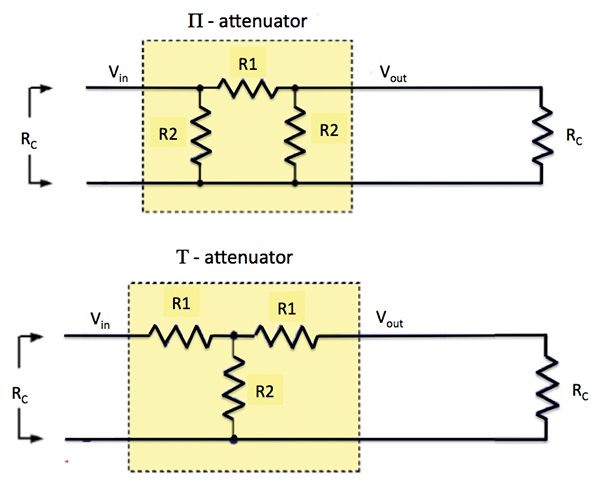 The equations that define the resistor values in Figure 6 in the general case are:

Figure 7 shows a “π” circuit realization with 4 Ω series resistance and 2.5 Ω shunt resistances. Figure 8 shows high-frequency roll-off due to the use of wire-wound high-power resistors. This could have been avoided using non-inductive resistors, at the expense of much greater assembly complexity. 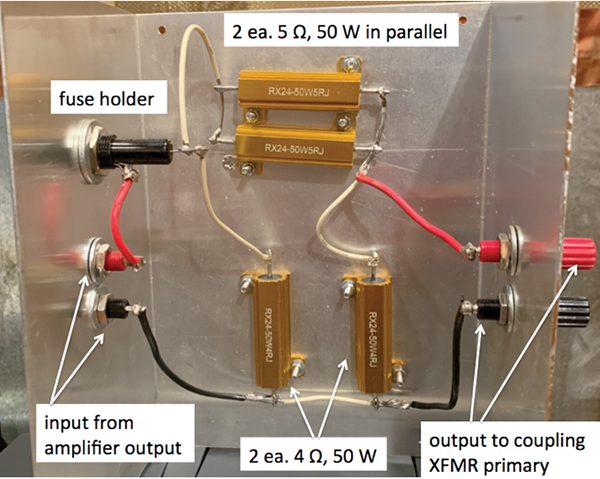 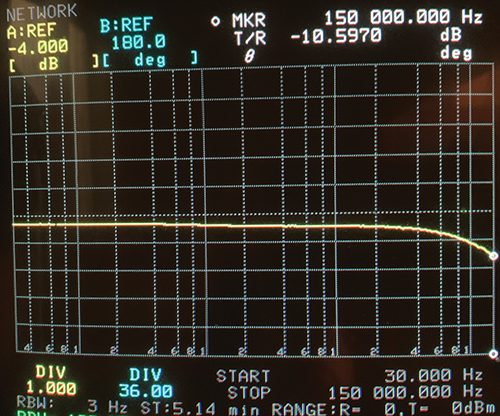