The ANSI-ASC C63® Committee on EMC is an 80-year old committee devoted to developing standards for electromagnetic compatibility. The American National Standards Institute (ANSI) has a formal agreement with the Institute of Electrical and Electronic Engineers (IEEE) so that standards developed and approved by ANSI-accredited standards committees are also approved by and co-branded with the IEEE. The co-branding is designated by the term “ANSI/IEEE.” The IEEE does the final editing of the document and publishes it through its formal procedures.

The Committee is proud to announce that it has published three new or revised standards in the first half of 2017. The standards are:

Changes from the previous edition of the standard include several text corrections, a new subclause to provide free-space correction terms for tuned dipole antennas, and another new subclause for requirements of frequency spacing. These were added along with a subclause and an annex on the use of time-gating to determine free space antenna factors (FSAFs) above 1 GHz.

Other items that were changed include: additional details for horn antenna calibration requirements; the addition of an equation and associated details for vertical max Ed in Annex A; clarifications/updates to the symmetry measurement for antennas used from 30 MHz to 300 MHz; an expansion of allowable reference antennas; and expanded information about estimating measurement uncertainties.
Furthermore, selected portions of IEEE Std 291™ 1991 for loop antenna calibration measurements are provided in a new annex, antenna calibration site (ACS) requirements were expanded and placed in a separate annex, and an annex was added for measurement uncertainty of the reference antenna method (RAM).

The standard provides procedures for the determination of antenna factors (AFs) for antennas used in radiated emission measurements as described in ASC C63 measurement documents. These AFs shall be used for either vertically polarized or horizontally polarized measurements at distance from the equipment under test (EUT) of 3 meters or more. The general measurement conditions and parameters for antenna calibration and characterization are covered in the main body of the standard.

Table 1 in the standard gives a summary of antenna types and the calibration methods used for product measurement and normalized site attenuation (NSA) measurement purposes.

The three most commonly used antenna calibration methods detailed in the standard include:

Abstract: An evaluation process and supporting test methods are provided in this standard to quantify the ability of a wireless device to coexist with other wireless services in its intended radio frequency (RF) environments.

The Introduction of the standard states:

The proliferation of radio-frequency (RF) wireless devices has been both explosive and pervasive in virtually every field in our society. The everyday use of wireless devices goes well beyond the early handheld walkie-talkies, introduced in the 1950s. It is estimated that cellular telephones outnumber individuals in the US population and other countries have even higher penetration rates for cell (mobile) phone usage.

These risks must be carefully evaluated and managed. As wireless technology is integrated into systems that require high degrees of reliability, such as medical devices, aircraft, and nuclear power plants, it is imperative that risks be quantified, mitigated, and managed to be at or below acceptable levels. Verification of the risk control measures associated with the following two areas are of interest to this group: 1) traditional EMC and 2) coexistence.

Traditional EMC testing is designed to exclude frequency bands where the device under test communicates wirelessly. Coexistence testing focuses on devices and systems that intentionally use wireless and it extends beyond traditional EMC to examine the device’s performance in frequency bands where it uses wireless communication. This standard provides methods for evaluating the ability of a device to coexist in its intended RF wireless communications environment.

The subject standard specifies methods for assessing the radio frequency (RF) wireless coexistence of equipment that incorporates RF communications. It specifies key performance indicators (KPIs) that can be used to assess the ability of the EUT to coexist with other equipment in its intended operational environment.

“Co-existence” (or “coexistence” has a complex definition in the standard, as follows:

coexistence: (A) The ability of two or more spectrum-dependent devices or networks to operate without harmful interference. (IEEE Std 1900.1-2008 [B28]) See also: interference. (B) The ability of one system to perform a task in a given shared environment where other systems have an ability to perform their tasks and may or may not be using the same set of rules. (IEEE Std 802.15.3-2016 [B29]) (C) A state of acceptable co-channel and/or adjacent channel operation of two or more radio systems (possibly using different wireless access technologies) within the same geographical area. (IEEE Std 802.16-2012 [B30]) (D) A situation in which one radio system operates in an environment where another radio system having potentially different characteristics [e.g., radio access technology (RAT)] may be using the same or different channels, and both radio systems are able to operate with some tolerable impact to each other. (ETSI EN 303 145 V1.2.1 [B17]) Syn: RF coexistence; wireless coexistence.

A closely-linked document has been published by the American Association of Medical Instrumentation (AAMI); it is AAMI-TIR 69:2017 Risk Management of Radio-Frequency Wireless Coexistence for Medical Devices and Systems. The ANSI document represents the “test methods” standard, while the AAMI standard presents the “risk-assessment” aspect of the coexistence challenge.

Part of the Introduction of the standard states:

In the process of performing a revision of ANSI C63.2-1996 to include radio-noise and field-strength characteristics for the 1 GHz to 18 GHz frequency range, the Accredited Standards Committee C63®—Electromagnetic Compatibility realized that there was a significant duplication of effort occurring between the international and the national EMC standards committees. For example, the specification ANSI C63.2 mirrored the CISPR 16-1-1:2003 (i.e., originally CISPR 2 and CISPR 3) requirements for the basic field strength instrumentation for the 9 kHz to 1000 MHz frequency range.

Consequently, the C63® committee then proposed to adopt CISPR 16, Part 1-1, as the US National Specification for field strength instrumentation but also retaining the unique requirements that are not in CISPR 16-1-1:2003 and are still used by certain domestic organizations. This approach was implemented in ANSI C63.2-2009.

In this 2016 version of the standard, the previous specifications of EMI receivers and spectrum analyzers were updated to reflect the current status of technology. In addition, further harmonization between CISPR 16-1-1 and the ANSI C63.2 was achieved to accommodate the use of the same instrument for measurements of intentional and unintentional radiators in accordance with both domestic and international requirements.

So, the standard specifies requirements for measuring receivers – including EMI receivers and spectrum analyzers (with and without preselection) – used for radiated and conducted emissions. It consolidates the applicable requirements found in CISPR 16-1-1:2010 as well as ANSI C63.2 into one standard for the purpose of providing a harmonized set of specifications, such that the same instrument can be used for measurements in accordance with national and international standards.

Additional standards published by the ANSI-Accredited Standards Committee – 2013 -2016 are shown in Table 1. C63 publications are available from the IEEE and from ANSI.

Summary
The ANSI-Accredited Standards Committee C63® is comprised of approximately 30 organizational members and six individual members (experienced EMC consultants). The Committee is actively working on about 20 standards at this time, with anticipated development periods of between two to five years for most standards. Additional details can be found at www.c63.org. 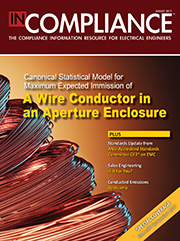