Some Thoughts About Interlocks

Recently I’ve had occasion to consider the subject of interlocks. I thought I would share some ideas with you. What is an interlock, and exactly how does it serve the purposes of safety?

I suppose first we should list some common examples of interlocks. But, some of these examples may not be interlocks, but are situations similar to interlocks and should be considered (see Table 1).

Let’s see if we can define exactly what an interlock is. Let’s start by considering a typical or generic interlocked system: a box with a cover.

For functional purposes, we need or expect to insert a body part into the box, and, for safety purposes, we must exclude any body part from the box. Thus, there are two operating modes, one of which requires access to a space which, in the other operating mode, is hazardous.

When the cover is closed, we presume that something hazardous is within the box, and that the cover is necessary and effective at keeping a body part from coming into contact with or otherwise being injured by the hazardous thing.

When the cover is opened, a sensor detects the opening of the door, and de-energizes the hazardous thing. The body part can then safely enter the box.

Hopefully, we can all agree that this is a valid and common example of an interlock.

The system is one in which we have a space (the box) which, under normal operation, contains a hazardous thing. When an attempt is made to enter that space with a body part (which requires opening of the door), the space is automatically de-hazardized when an attempt to enter is initiated.

Can we then define an interlock as:

A device which automatically de-hazardizes a hazardous space when an attempt is made to insert a body part into that space.

Now let’s examine the examples, and see if they fit the definition (see Table 2).

We can see that, in the cases of the garage door opener and the robot, the space that contains the hazard need not be defined by a physical enclosure. Therefore, our definition is valid for these two situations.

But, we have two situations for which the definition does not hold: the self-cleaning oven, and the motor-operated paper cutter.

Most of us would agree that automatic locking of a self-cleaning oven is an interlock. So, we need to fix the definition to include such a situation.

A device which automatically de-hazardizes or prevents entry into a hazardous space when an attempt is made to insert a body part into that space.

Now, the definition fits all the examples, including that of the motor-operated paper cutter.

We can see now that, with the exception of the electric car window, all of these are examples of interlock systems. Interlocks are not necessarily electrical; they can be mechanical. They don’t necessarily obviate the hazard; they may also prevent entry under hazardous conditions.

The interlock plays a role in both operating modes.

When the space is in the non-hazardous mode, the interlock must maintain that condition regardless of product operating controls.

When the space is in the hazardous mode and an intrusion attempt is made, the interlock must override product controls to either de-energize the space or prevent entry to the space until the space is non-hazardous.

(The home or auto alarm is an interlock. The interior space of a home or car has two operating modes, one which allows access to the space, and one which prevents unauthorized entry to the space. The interlock is intended to deter entry when the main lock is defeated or bypassed in an unauthorized manner.)

So, the elements of an interlock are:

An interlock is a device or system which is applied to a space which has two operating modes, one hazardous and one non-hazardous. The interlock automatically detects the operating mode.

During the non-hazardous mode, the interlock prevents energization of the space.

During the hazardous mode, if an intrusion is attempted, the interlock either de-energizes the space, or prevents entry into the space until the space is non-hazardous.

Now, let’s look at some characteristics of the interlock device or system.

For some kinds of hazards, we traditionally require two safeguards, one for normal operating conditions, and one for a fault in the first safeguard. IEC standards for electric shock are of this type: they require both basic insulation and some means for mitigating the failure of basic insulation. Therefore, when the space involves electric shock, the interlock device or system should assure safety both with the interlock working normally and with a single failure within the interlock. For electric switches as interlock devices, we presume that the switch fails in the open position; therefore, the non-hazardous detection must be with the switch contacts open. For optical-path detection devices, we presume the absence of a light source is the principal failure; therefore, the non-hazardous detection must be the absence of light.

For other kinds of hazards, we traditionally require one safeguard. High-temperature parts and moving parts traditionally are provided with one safeguard (probably because the safeguards are not subject to failure). If an interlock for a moving part is not electrical in nature, then usually it need not be of a fail-safe design.

Interlock systems should be in their non-energized, or relaxed, or normal, or resting state when the space is in its non-hazardous mode. 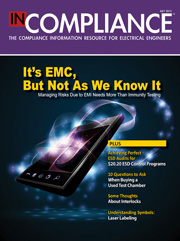