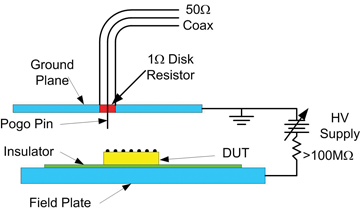 Figure 1: Diagram of a field induced CDM tester according to the JEDEC CDM standard 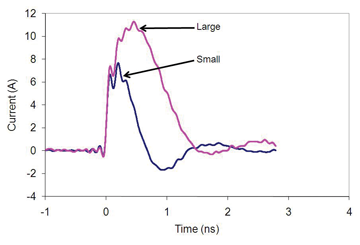 The circuit in Figure 3 was implemented in the Spice simulator LTSpice.7 The Spice circuit diagram, with values used to simulate the large JEDEC calibration module, is shown in Figure 4. A voltage controlled switch is used to represent the spark as the pogo pin approaches the DUT pin. A switch resistance of 26 ohms represents the resistance of the arc. The voltage source V2 is used to trigger the switch and was set to trigger the switch at 1 ns. The voltage source VCDM provides the test voltage, 500 V in the simulations presented. A 9 nH inductor represents the combined inductance of the spark and the pogo pin as well as a small ferrite bead included in the Ground Plane assembly to tune the waveform to match the JEDEC standard. The values for CDUT are from parallel plate calculations and are very close to the nominal values in the JEDEC CDM standard. CDG is calculated assuming a parallel plate capacitor and a 3 mm long pogo pin. The value of CFG is also based on a parallel plate capacitor model with a peripheral capacitance term minus a capacitance representing a shielding of the Field Plate to ground plane capacitance due to the size of the device under test. The separation between the Field Plate and the Ground Plane was equal to the 3 mm long pogo pin and the thickness of the JEDEC calibration module. The capacitance values used are shown in Table 1. In the simulation the potential of the DUT is set to an initial condition expected for the midpoint between two capacitors in series with a voltage across them, in this case 487 V. 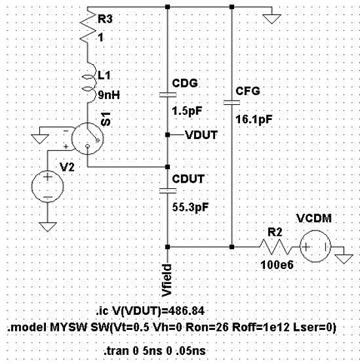 Comparisons of the measured and simulated CDM waveforms are shown in Figure 5. The measured data is the same as shown in Figure 2. There are two major features of interest beyond the good agreement between the simulations and the measured data. First of all, the peak current drops only by about 25% even though the DUT capacitance values differ by a factor of 2.9. The second feature is that the width of the major peak is much narrower for the small module. This shows that the narrower pulse widths for small DUTs shown in the first article in this series1 is simply a property of the LRC circuit which makes up the CDM tester. 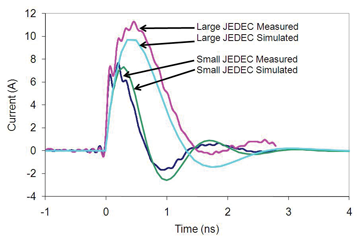 Figure 5: Comparison of measured and simulated waveforms for the JEDEC calibration modules 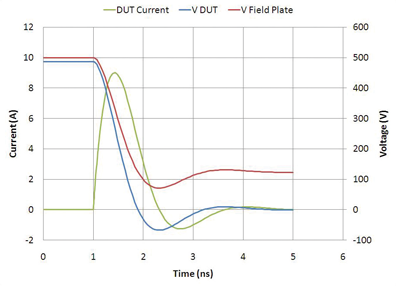 Figure 6: Current and voltages for a simulation of a CDM event for the large JEDEC module

Discussion
The simulations shown here provide useful insight into the field induced CDM test. The event is a rapid movement of charge between the capacitances of the field induced CDM tester. The geometry of the test fixture is critical in terms of determining the capacitance, especially CFG. CFG is affected by many things besides the dimensions of the Ground Plane. The length of the pogo pin and the thickness of the DUT are obvious. Calibration of the CDM system is performed using coin shaped modules with a thickness of 1.27 mm. Many integrated circuit packages such as Pin Grip Arrays are much thicker than this. The thickness of a product when tested on the CDM machine will therefore affect the severity of the test it receives due to changes in the Field Plate to Ground Plane spacing. The area of the DUT will also affect the value of CFG. As the DUT size, and therefore capacitance, increases it will shield a larger area of the Field Plate resulting in a decrease in the value of CFG. The result is that as DUT area and capacitance increases, CFG decreases. This enhances the well known property of CDM stress not being linear for large DUT capacitance.

The values of pogo pin, spark inductance and the spark resistance are not precisely known values, which limits the ability of the circuit models to be used as predictive tools. Spark length and resistance is an area that could be a science in itself. Spark properties depend strongly on humidity as well as the shapes of both the pogo pin tip and the geometry of the integrated circuit pin being tested. In the current analysis these values can be considered fitting parameters.

Conclusions
Circuit model simulations of field induced CDM measurements are a valuable tool in the understanding of CDM testing. They show how the event is a rapid movement of charge between the capacitances in the tester, and that the geometry of the tester, the properties of the device under test and properties of the spark are all critical to the severity of
the test.

Marty Johnson returned to National Semiconductor in 2006 working in ESD device design debug and supervising the ESD Characterization Lab. He currently is supervisor of the ESD Qualification & Characterization Lab. From 2001 to 2006, he worked at Philips Electronics (Semiconductor Division) focusing on WLR and TLP characterization. During his tenure at Philips he was the corporate representative to the Reliability Technology Advisory Board (RTAB, now ISMI) and its chairman in 2004. From 1978 to 2001, he worked for National Semiconductor spanning the semiconductor reliability spectrum from basic reliability qualification through wafer level reliability to ESD and Latch-up. He is also active on the JEDEC ESD Team (JC-14.1), the Joint ESDA/JEDEC HBM and CDM teams and the JEDEC Latch-up Standards team. 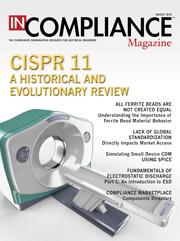