Shooting for the Stars with a DIY Observatory

In the August 2013 issue of In Compliance, I mentioned the observatory Lisa and I built near our home in Groveland. Hoping to have inspired a few more astrophotographers, I’m offering a few more details about that project.

Our 800 square-foot studio house and 15-foot diameter dome observatory was built by Bobby Caldera of Caldera Construction. Bobby lives in Sonora, CA, and also built our house in Groveland in 2003. The dome itself was made by a company called Technical Innovations. Technical Innovations is located in Maryland and carries a line of observatory domes that range in size up to a 15 foot dome (which is the size I purchased). The observatory dome is located on the flat roof above the garage. Locating the dome on the second story had the benefits of reduced obstructions to the sky, as well as air turbulence from surfaced-based heat sources – think of surface air currents created when the ground cools after a long summer day. However, placing the observatory over the garage did present the other challenges of stability and vibration isolation related to this second story configuration.

The heart of the telescope system is the pier on which the telescope is mounted. Given the importance of tracking, very little (if any) vibration or movement in the telescope mount can be tolerated. To put this into perspective, the telescope mount cannot even tolerate the vibrational equivalent of the width of a human hair when the camera shutter is open. Movement in the telescope mount that isn’t detected when you look through the telescope can be devastating to astrophotography. Unless designed properly, simply walking on the observatory floor or the passing of a nearby truck can translate enough vibrations into the system so that the telescope is useless for astrophotography. To address these issues, I decided to construct a 2 ½ foot diameter, 12 foot tall pier. The pier itself is a steel tube filled with concrete and rebar. The base of the pier is held in place by an 8 foot cube footing of rebar enforced concrete. To compare the huge mass of this 8 foot cube footing, the concrete slab on which the rest of the house is supported is only about 4 to 6 inches deep. The entire pier system weighs approximately 85,000 pounds and provides a very stable base on which the 250 pounds of telescope and equipment is mounted.

A photograph of my wife Lisa standing next to the telescope pier provides a sense of scale (Photo 1). She is standing on the isolated 8 foot cube footing which supports the 2 ½ foot diameter 12 foot tall pier. In the final phases of the construction of the observatory, another smaller (approximately 3 foot tall) pier is mounted on top of this base pier. The telescope rests on this smaller pier. Not only does the photograph provide a good perspective of the size of the pier, it also shows the size of the beams that will be required to support the isolated floor of the observatory. 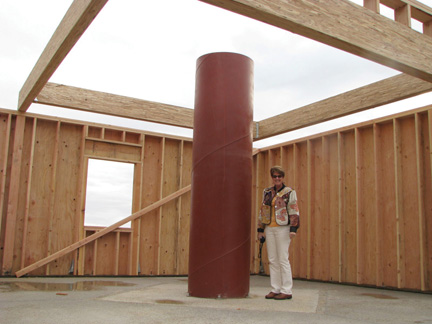 The 15 foot observatory dome is accessed by climbing a set of stairs in the garage that penetrate a trap-door type floor. The dome is supported by and rotates on top of a 3 foot tall wall ring. The center of the dome, where the pier penetrates the floor, is 10 ½ feet tall. The pier is isolated from the floor by a 2 inch spacing to prevent vibrations caused by walking on the floor from reaching the telescope system.

The dome has a 4 foot wide “shutter” that opens to provide access to the sky. The rotation of the dome is automated and tracks the movement of the telescope so it will always look out of the shutter opening. Almost everything inside the dome is painted dark blue or black to prevent any stray light from reflecting into the telescope when I take photographs. The dome serves several purposes – it reduces wind and ambient light from reaching the telescope, protects the contents from the elements when it is not in use, and provides 360 degree access to the sky.

Included here is a photograph of the dome under construction (Photo 2). I took the photograph while standing on the roof of the studio-house portion of the project. As I already mentioned, the dome sits on top of the garage and is entered from a trap door in the floor. This photograph shows the dome just before the shutter was installed. 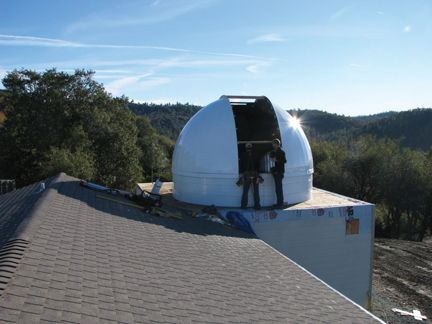 Finally, Photo 3 shows the dome open at night and ready for “work”. There is a red glow inside the observatory because I had both the red and white light systems on for the photograph. Also for the benefit of this photograph, I had pointed onto the dome lights that would not normally be on when the observatory is in operation. Through the shutter opening you can see the telescope sitting on top of the mount. 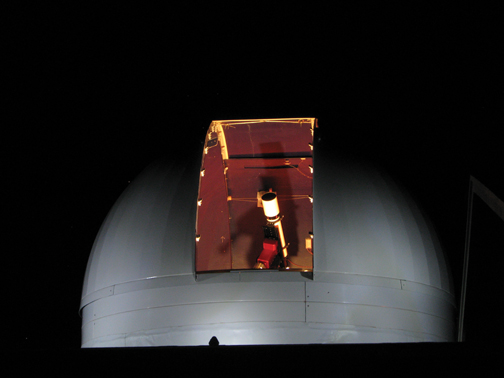 For more from Eddie Pavlu…

Reaching for the Stars from the Lens of a Telescope 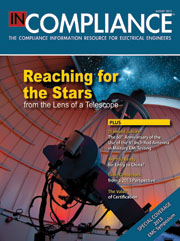