This s-parameters tutorial consists of two parts: Part I discusses the fundamental background needed to understand the concept of s-parameters; Part II (to appear in the next issue of In Compliance magazine) explains the s-parameters use in EMC measurements and testing.

The background needed for the study of s-parameters consists of two fundamental topics:

Two-port network theory is a circuit analysis technique that is different from the majority of other approaches. Most circuit analysis approaches (Kirchhoff’s laws, node voltage/mesh current methods, superposition, and others) provide a way of calculating voltages and currents anywhere in the circuit. Thevenin or Norton theorems allow us to obtain an equivalent circuit model with respect to the specified pair of terminals (usually the output terminals, or the output port) of the network.

Another way of describing the circuit with respect to the two terminals is by treating the network as a two-port circuit. In many electrical circuits obtaining voltages and currents at the input and output ports, instead of any point in the circuit, is more convenient and practical. Thus, the fundamental principle underlying the two-port circuit analysis is that only the terminal variables (input voltage/current and output voltage/current) are of interest. We are not interested in calculating voltages and current inside the circuit.

In EMC the two-port network analysis is usually carried in a sinusoidal steady-state where the voltages and currents are sinusoids and as such, at each frequency, are described by their amplitudes and phases. It turns out that such an analysis can be easily performed using complex numbers, called phasors, (instead of real time functions) which represent these amplitudes and phases. To differentiate a complex variable from a real variable let’s place a “hat” above it. Thus, V and I denote real variables, while

correspond to the complex ones. Figure 1 shows the basic building block of a two-port network. 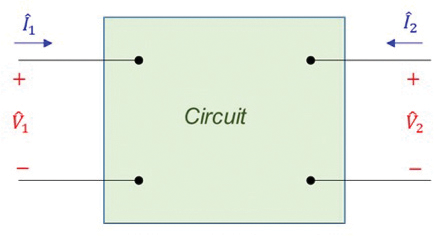 There are six different ways to write the two equation involving the four variables; this is shown in Eq. (1).

The question is: How do we obtain a particular set of parameters? Let’s begin with the z parameters used in Eq. (1). These parameters can be obtained from Eq. (2a) as

Thus, the z parameters can be obtained from the voltage and current measurements when each port, one at a time, is open-circuited.

The y parameters are obtained from Eq. (2b) as

Thus, the y parameters can be obtained from the voltage and current measurements when each port, one at a time, is short-circuited. The remaining port parameters are obtained in a similar manner.

The a parameters are obtained from Eq. (2c) as

Thus, to obtain the a parameters, both the open-circuit and short-circuit measurements at port 2 are needed.

The b parameters are obtained from Eq. (2d) as

Thus, to obtain the b parameters, both the open-circuit and short-circuit measurements at port 1 are needed.

The h parameters are obtained from Eq. (2e) as

Finally, the g parameters are obtained from Eq. (2f) as

In summary, to obtain any set of parameters we need two measurements. These measurements are either at the same port, or two different ports, when the port is either short- or open-circuited.

Each parameter set contains the same information and all sets are related to each other. This means that we can always obtain one set from another through algebraic transformations.

When the required measurement for a specific set of parameters cannot be made, we can always substitute any other measurement from Table 1, and determine the missing parameters through algebraic transformations.

In the typical application of a two-port network, the circuit is driven at port 1 and terminated by a load at port 2, as shown in Figure 2.

In this case, we are usually interested in determining the port 2 voltage and current

L. These terminal currents and voltages give rise to several characteristics describing this two-port network:

Thus, in the two-port circuit analysis we can determine the required characteristics of the network from the short and/or open circuit voltage and current measurements at the port(s).

C and length L, terminated with a load

L. When the switch closes a forward voltage,

(z) denote the total complex voltage and current, respectively, at any location z along the line.

Upon arrival at the load a reflected wave is generated, as shown in Figure 4. 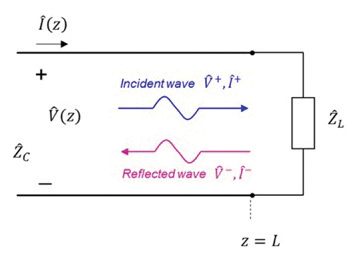 Figure 4: Reflection at the load

L is the voltage reflection coefficient at the load, given by

The total voltage at the load is the sum of the incident voltage and the reflected voltage. When the load is matched to the transmission line (

C) the reflection coefficient is zero, and therefore there is no reflected voltage.

When the line is not matched at the load, a reflected wave,

–, is created and travels back to the source. Upon the arrival at the source this wave gets reflected again, creating a forward voltage wave 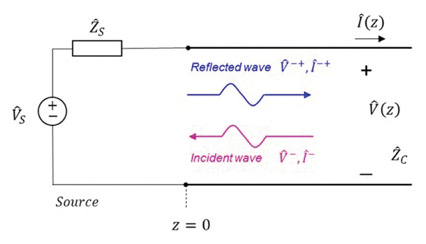 Figure 5: Reflection at the source

The voltage of the reflected wave,

-+ is related to the voltage of the incident wave,

S is the voltage reflection coefficient at the source, given by

When the source is matched to the transmission line (

C) the reflection coefficient is zero, and therefore there is no reflected voltage at the source.

Figure 6: Reflections at a discontinuity

12 is the voltage reflection coefficient, given by

12 is the voltage transmission coefficient given by

To introduce s-parameters (also known as scattering parameters) we will combine the two-port networks approach and the transmission line reflections. Recall: using two-port network approach we can obtain the relevant information about the network by taking either short or open circuit measurements at its ports. This approach works well for the low frequency signals. When high frequencies are present creating a true short or true open at a port presents a formidable task because of the parasitic inductance and capacitance.

To characterize high-frequency circuits we use s parameters which relate traveling voltage waves that are incident, reflected and transmitted when a two-port network is inserted into a transmission line. This is depicted in Figure 7. 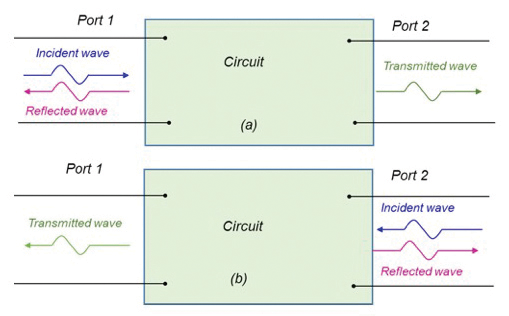 The incident waves (which give rise to the reflected and transmitted waves) can be impinging on either port 1 or port 2. Let’s denote the wave incident on port 1 and port 2 by

2, respectively. These waves give rise to the reflected waves,

Figure 8: Incident and reflected waves at port 1 and port 2

That is, s parameters define the reflected wave at a particular port in terms as of the incident wave at each port.

(Note: s parameters are complex numbers and as such, technically, we should denote them with a hat, i.e., as

. In vast majority of the EMC literature the s parameters are denoted without a hat, with the implied understanding that they are complex numbers. We will follow this convention).

The incident and reflected waves are related to the voltage and current waves at each port as [2], [3]

C is the characteristic impedance of the transmission line connected to the two-port network.

The s-parameters in Eq. (12), which related to the voltages and currents at each port by Eqs. (13), are referred to as simply the s parameters (as opposed to the generalized s parameters defined next).

We obtain the s parameters from Eq. (12) in a manner similar to that used for the two-port parameter sets discussed in Part I. That is,

When evaluating the two-port network parameter sets in part I, we selectively measured a voltage or current at a given port, when one or both ports where either open- or short-circuited (see Table 1). When evaluating the s parameters we cannot use open- or short-circuited measurements as they are not reliable at high frequencies. So how do we translate Eq. (15) into a practical application?

Let’s explain the meaning of Eq. (15) by looking at the typical application of a two-port network, shown in Figure 9. 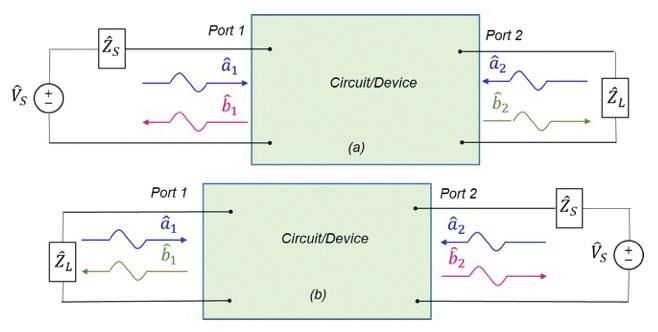 In Figure 9a, the incident wave,

1, arrives at port 1 where it creates a reflected wave,

1, and a transmitted wave

2. The reflected wave travels back to the source. If the source is matched to the transmission line (

C), there is no reflection at the source and thus no other wave will travel to port 1.

C), a reflection will take place and a reflected wave,

2, will travel towards port 2. On the other hand, if the load is matched to the transmission line, there is no reflection at the load and therefore no wave will be incident on port 2. The circuit in Figure 9b can be described in a similar manner.

Now, we are ready to investigate each individual s parameter. The parameter s11 is obtained from

Thus, s11 is the port 1 reflection coefficient, when the incident wave on port 2 is zero, which means that port 2 should be terminated in matched load (

C) to avoid reflections. This is shown in Figure 10. 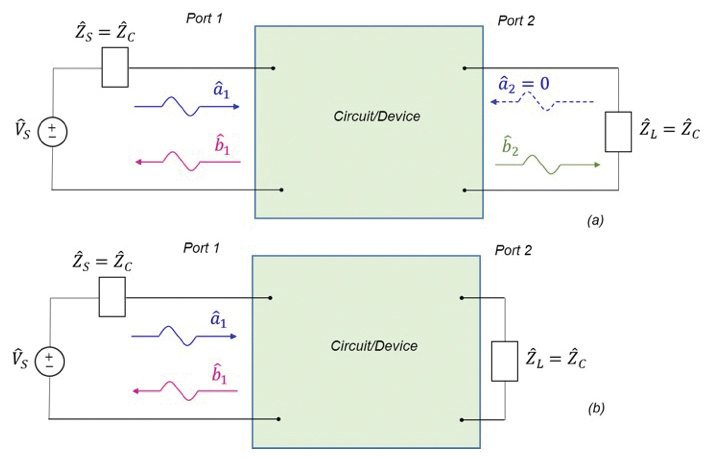 Note that the parameter s11 can be determined from two different circuit configurations: a) with the load connected at the end of a matched transmission line, and b) with the matching load connected directly to port 2.

The parameter s21 is obtained from

Thus, s21 is the transmission coefficient from port 1 to port 2, with port 2 terminated in matched load, as shown in Fig. 10a.

To obtain the parameters s22 and s12 we use the circuits shown in Figure 11. 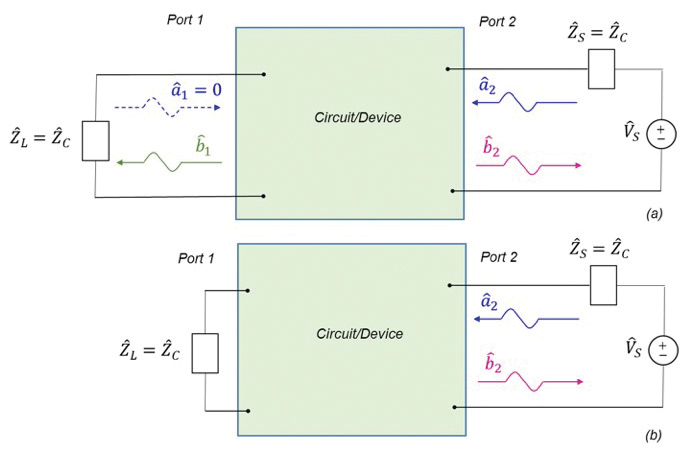 It follows that s22 is the port 2 reflection coefficient, when the incident wave on port 1 is zero, as shown in Figure 11.

Thus, s12 is the transmission coefficient from port 2 to port 1, with port 1 terminated in matched load, as shown in Fig. 11.

Thus, we can relate the generalized s parameters to the powers as follows.

We can express several gains and losses (in dB) in terms of s parameters. The most common gains (losses) in EMC are:

Part II of the s-parameters tutorial will describe the application of s parameters in the EMC measurements and testing. 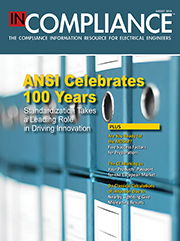