A rule-of-thumb in EMC and RF (hereinafter termed “The Rule”) is that bayonet connectors (BNCs) leak above 10 MHz and are thus to be avoided for radiated measurements. Threaded connectors such as TNC, N, and SMA are used for radiated test work. Having said that, to this day my test facility has some old biconicals and rod antennas with BNC connectors. What’s going on?

On one hand, there is The Rule. On the other hand, it doesn’t seem likely that the manufacturers of otherwise fine test equipment would use a leaky connector.

A measurement of connector leakage performance – BNC vs. threaded – is revealing.

One might imagine a connector leakage test to look like Figure 1, where a signal is piped through a length of coaxial cable, and the radiation due to that signal is measured externally. 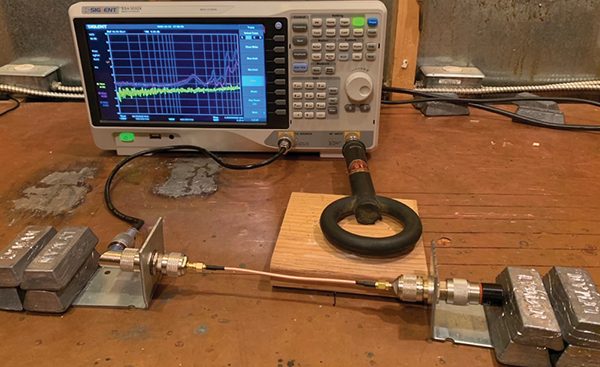 A measurement like that shown in Figure 1 will indeed verify The Rule. But that isn’t the actual problem when the BNC connector is on an antenna. The issue there is transfer impedance because the potential problem with a leaky connector is that the same field that impinges on the antenna will also impinge on the coaxial connection to the receiver. And if the induced external cable current gets inside the coaxial transmission line, it will corrupt the radiated measurement. And it turns out that certainly in the rod and biconical antenna ranges a BNC connector is suitable for this application and doesn’t leak much more than a threaded connector as long as it isn’t defective.

So, perhaps counter-intuitively, BNC connectors leak less from the outside in than from the inside out.

The balance of this Tech Tip presents data substantiating the preceding statements. And as a fringe benefit, we find that BNC connectors can make serviceable connector savers for smaller diameter cables terminated in fragile SMA connectors.1

The optimal way to achieve that is to use the same exact cable, and change connectors. This is achievable with a cable using a threaded connector such as SMA, and then adapting to other threaded and bayonet connectors, as was done in this investigation.

Figures 2a, 2b, 2c, and 2d show the measurement. LMR-195 50 Ω coaxial cable with an N connector at one end and SMA at the other has its termination bonded to a ground plane at each end. A bulk cable injection (BCI) clamp induces an RF potential on the cable shield, and a current probe monitors the resultant current at the connector of interest. Both current and the induced potential between coaxial center conductor and ground are displayed on a spectrum analyzer (Figures 3 and 5). Voltage and current may be compared to assess transfer impedance. For this investigation, transfer impedance nominal value is not of great interest; it is the change when swapping out a threaded (N) for a bayonet (BNC) connector, or the effect of wiggling a connector, that is of primary interest. 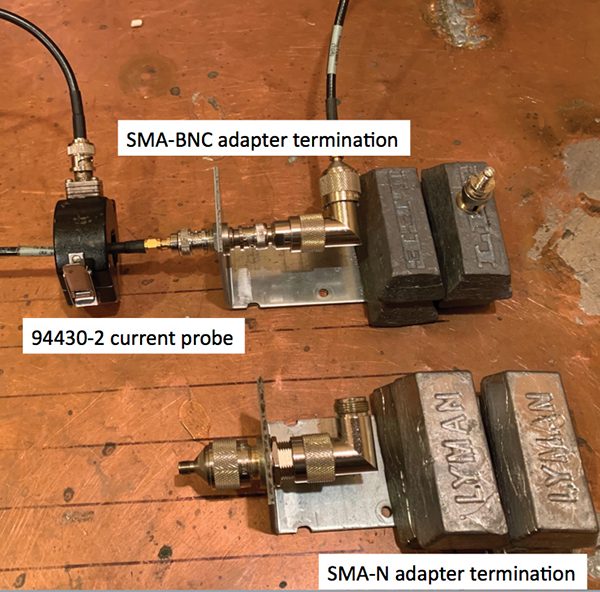 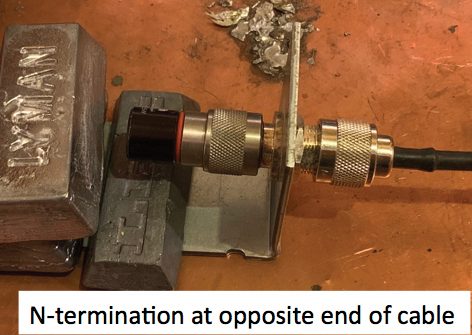 Figure 2c: Opposite and cable termination 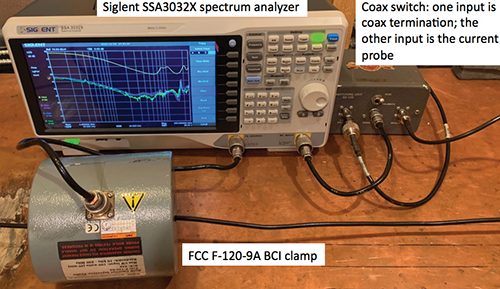 In Figures 3a and 5, the yellow curve represents current. The 94430-2 current probe has a 0 dBΩ transfer impedance from 1 – 250 MHz, so the reading in dBuV is also the current in dBuA. In Figure 3a, the pink curve is the RF potential measured using an SMA-to-N adapter, and the blue curve is the RF potential using an SMA-to-BNC adapter. There is very little difference between BNC and N traces over this frequency range. 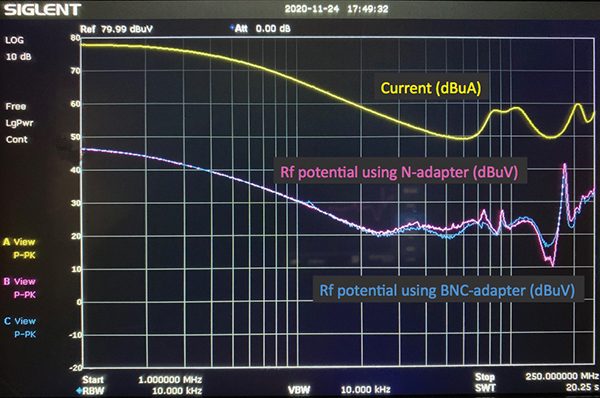 Figure 3b is more interesting, being the same as Figure 3a but with an added (green) trace. This trace is also the RF potential measured using an SMA-to-BNC adapter but a different model, and the results are significantly worse. The erratic green trace was arrived at by wiggling the coax cable, resulting in a loosening of the threaded connection between the cable’s SMA connection and the SMA-to-BNC adapter. The jogs in the trace should not be interpreted in the frequency domain but understood to be time-domain perturbations, recorded using a max hold function as the cable was wiggled. Figure 4 explains the mystery. 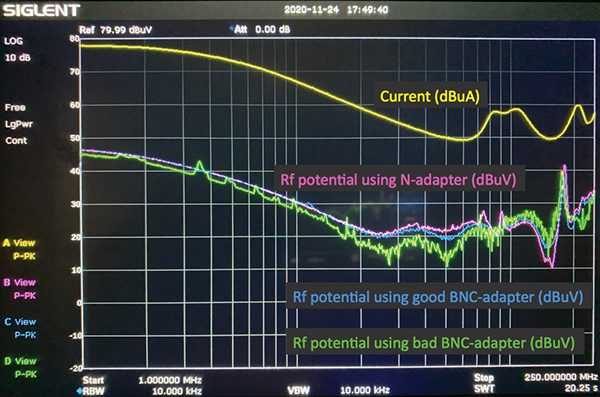 Figure 3b: Identical to Figure 3a except added the green trace which is a max hold of the author wiggling the interrogated end of the cable while sweeping 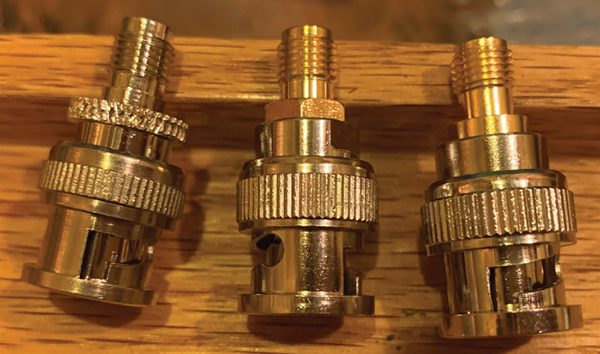 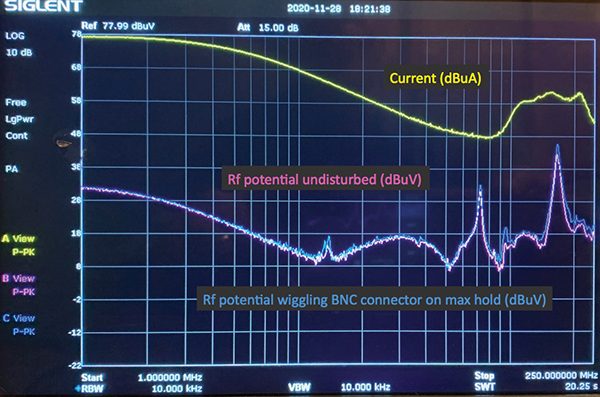 Figure 5: Same as Figure 3b but using a similar length of LMR-195 coaxial cable with BNC connectors at both ends with no SMA-to-BNC adapters

Coaxial Cable Used as Part of the Radiating Test Set-Up: Assessment of Radiation from Coaxial Connection

The obvious close probe measurement for leakage from a connector is a loop probe placed adjacent to the leaky connector while the test coax is driven directly from a tracking generator into a 50 Ω dummy load as shown in Figure 6. This would have worked, except the only probe available was an Empire Devices MP‑105 rated for use from 20 MHz to 1 GHz and it was not sensitive enough below about 100 MHz for the purpose of this measurement. 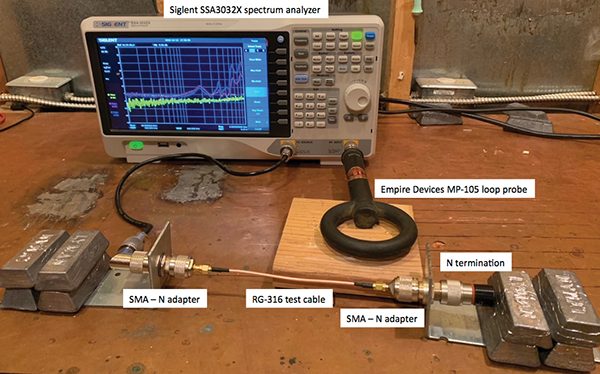 So instead, as shown in Figures 7a and 7b, a current probe was placed around the entire cable, measuring the common mode current, of which there should theoretically be none at the frequencies where we worry about a connector leaking, that is, at and above 10 MHz.

Figure 7b: Identical to Figure 7a, except one of the cable terminations changed to BNC

Figures 7a and 7b require some explanation. For the purpose of this demonstration, the idea is that if the connectors don’t leak at all there should be no common-mode current, that is, the center conductor and shield current are equal and opposite, and net flux picked by the current probe is nil. This is only true at higher frequencies where the shield path is a more attractive path than the ground plane beneath it, as explained by Henry Ott in his seminal 1976 book, Noise Reduction Techniques in Electronic Systems,2 and demonstrated practically annually at EMC Symposia.

Independent of which adapter is selected, we see identical behavior from 10 Hz to ~10 kHz, where the shield starts being the more attractive path.3 Ott’s treatment shows the roll-off continuing indefinitely; here we run into noise floor but we can see that the good quality SMA-BNC adapter leaks some compared to the threaded baseline (Figures 7a and 8a versus Figures 7b and 8b), as low as 100 kHz but almost 10 dB by 1 MHz and likely more at 10 MHz but we are noise floor limited. The poor quality SMA-BNC adapter (Figure 8c) leaks a lot. Comparison of the degradation near 10 MHz amongst Figures 8a, 8b, and 8c show significantly worse radiated emission performance by BNC connectors vs. the radiated susceptibility transfer impedance measurements in Figures 3 and 5. 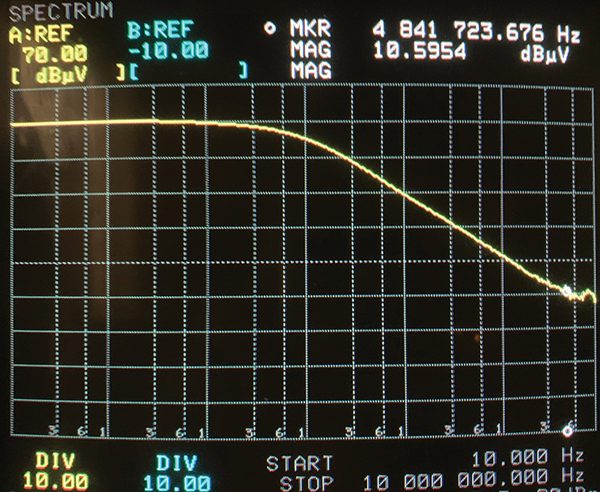 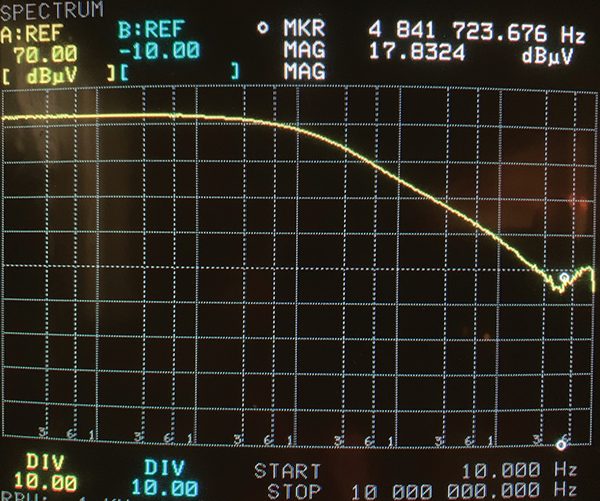 Figure 8b: Common mode current with SMA-BNC adapter at one end 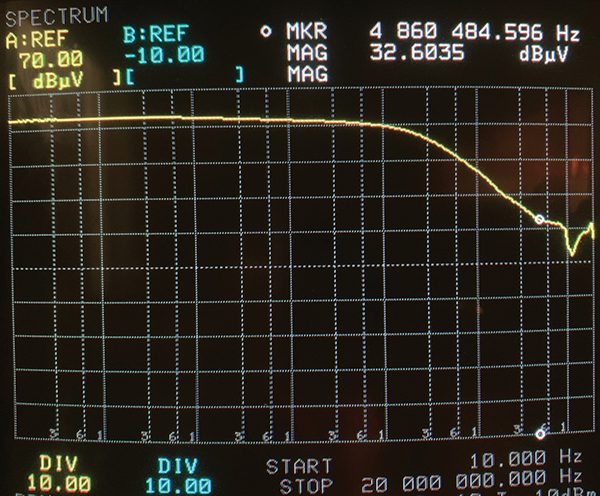 When using coaxial cable as part of the radiated emission measurement set-up, BNC connectors provide quite decent performance compared to threaded. While this limited set of test data shows good performance to 1 GHz, most applications will use threaded connectors at UHF. The point is that if an EMI test antenna uses a BNC connector, there should be no concern, and there is no contradiction with “The Rule.”