Furor and controversy are words which describe the process by which standards committees decide the value of the resistor in the leakage current measuring network.

However, the different specified resistor values create no more than a 6.25% error for the value of the leakage current.

The ANSI, UL, CSA and IEC circuits are demonstrably identical; all four give the same measured value.

What difference do these values make?

Let us assume that we are measuring 0.5 milliampere of leakage current from a 120-volt product. To have leakage current we must have a circuit consisting of a voltage source, a series impedance, the current-sampling resistor (1500 ohms), and a return path (ground). See Figure 1. 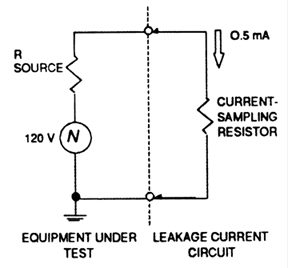 And, we can repeat the calculations for a 240-volt source.

What do these data mean? Essentially, we have a current source. This means that the current is nearly independent of the load which, in this case, is the current-sampling resistor.

The worst-case error is +6.25%. This means that a manufacturer could test leakage current with an ordinary ammeter, knowing that the ammeter reading is higher than the reading with a 1500-ohm resistor. If a manufacturer used the ammeter and the actual limit value, 0.5, 3.5 or 5.0 milliamperes, he would have a small guard-band such that his measurements would always be pessimistic.

So, where only power-line frequency appears in the leakage current, why go to the trouble of using the resistor? If it passes with the ammeter, it will pass with the resistor!

Why all the fuss about the value of the resistor?

In this case, assume the current- sampling resistor is a 1500-ohm, 5% resistor. Let us further assume that the resistor is at the low end of its tolerance, -5%. The resistor value therefore is 1425 ohms. Using Ohm’s law, the current in the circuit is:

The actual voltage across the 1425-ohm resistor is:

If we now calculate the value of leakage current using the nominal value of the resistor rather than the actual value, we get:

This is very nearly the same error as the resistor tolerance, 5%. 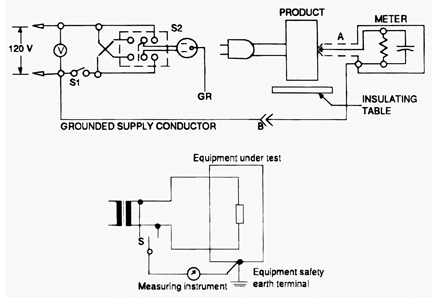 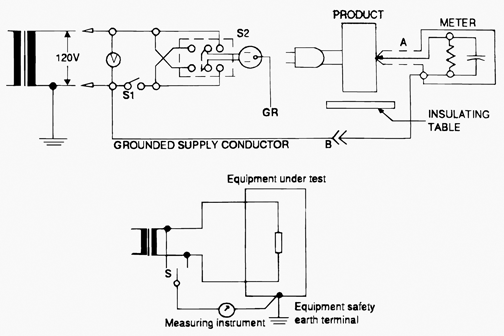 Figure 2b: Add Source to UL

Figure 2c deletes the ground from both the UL and the IEC circuits. Since there is only one connection to ground in both circuits, there can be no current in the ground, so the grounding is extraneous to the measurement. 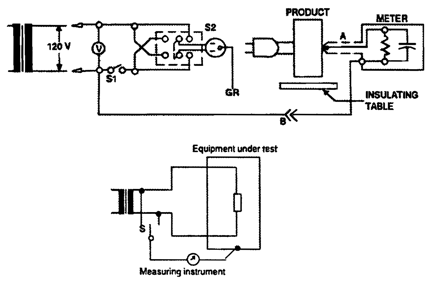 Figure 2d simplifies the UL circuit by deleting the plug and socket. 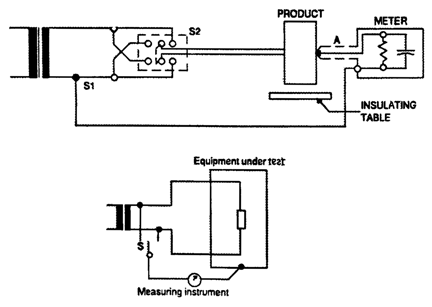 Figures 2e and 2f show the normal and reverse polarity positions, respectively, of the UL and IEC polarity switches. 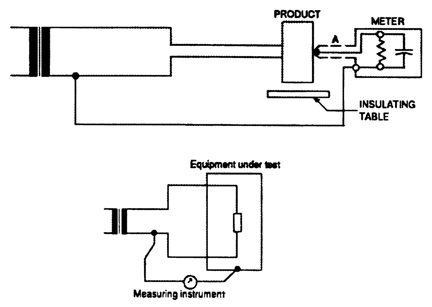 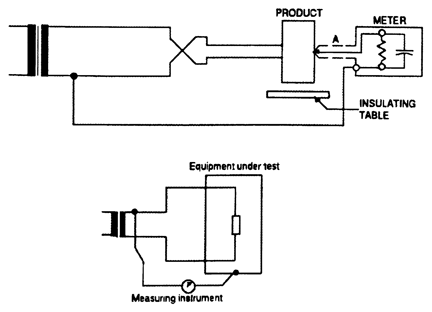 Next, let’s examine the effect of the 0.15 microfarad capacitor in parallel with the current-sampling resistor. Capacitive reactance is given by: