If your product has a flyback power supply and radiated EMC problems are observed in the VHF frequency range, a simple low cost solution can be found with a resistor and a capacitor.

Many electronic products in the industrial, communications and medical fields are using switching power supplies with a flyback converter because of its simplicity and low cost.

Usually, EMC design guidelines in flyback literature are related with the switching effects of the output transistor to minimize emissions for conducted tests in the 9 kHz to 30 MHz range. But failure in radiated emissions in the VHF range is typical when testing the product for EMC compliance.

Because of the frequency range of the problem (e.g. 30MHz to 300MHz), the hidden antenna is usually the mains cable with lengths from 1 to 3 meters. The excitation of that antenna comes from the common mode currents injected from the product to that cable. In that situation, movement of the cable changes the measured levels (“antenna” is found) and a ferrite is a typical solution to pass the test.

But, when troubleshooting EMI/EMC problems, it is recommended to find the source of the noise inside the circuits instead of trying a solution through shielding or filtering as in the case of a ferrite (EMI continues inside the product since the source has not been eliminated). Note that some products can not apply those solutions because of cost or size.

A 50W flyback power supply was used to explain the problem in this column. The general schematic, including the long mains cable at the input, is shown in Figure 1. To measure the common mode noise injected in the cable a current probe CM was connected to a spectrum analyzer. It is obvious that, to reduce the radiation from the cable, a reduction in that current is required.

In flyback converters, the VHF EMI is usually created by the secondary high speed diode Do because the fast rising/falling of the current.

The diode is not ideal so it has a reverse cathode to anode leakage current when switching to off state. That current is related with the reverse recovery time of the diode so a soft recovery diode generates less EMI than a hard recovery diode (note that the efficiency could be reduced).

In Figure 2 (left), the voltage Vd across the output diode (related with the origin of the common mode noise CM) was measured for the original system failing in EMC. Note the high dv/dt characteristics and ringing because the stray inductances and capacitances of the circuit components and layout. The frequency of that ringing is the frequency for failing the tests. 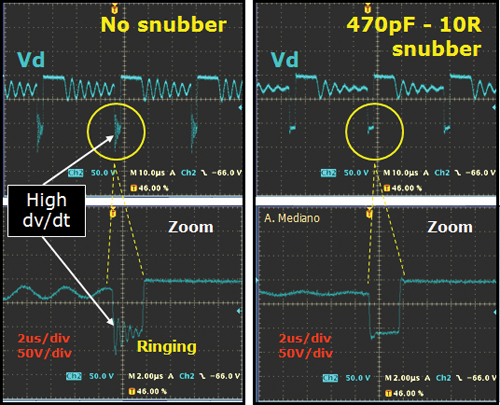 Figure 2: Diode voltage with ringing (left) and without ringing (right).

In Figure 3, the output of the common mode probe CM is shown in yellow color using the max-hold mode of the analyzer in the 110-350MHz range. The radiated EMI level is proportional to the amplitude of that current. 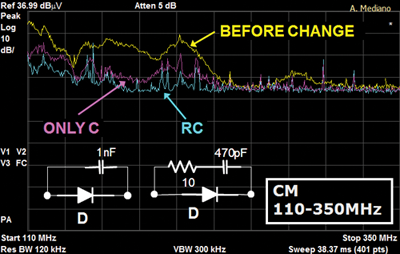 To reduce the noise, snubbers can be used to make the reverse recovery waveform soft so the noise source is reduced or eliminated.

A detailed calculation of the snubber is out of the scope of this column but usually tens of ohms and around 200-470pF are a good starting point. Monitoring the output of the CM probe, we can evaluate the efficiency of the snubber, reducing the injection of CM noise in the cable.

A series RC snubber (10 ohms and 470pF) was connected in parallel with Do. The ringing disappeared as shown in Figure 2 (right). Common mode current in mains cable was reduced around 20dB as shown in Figure 3 blue trace and the product passed the radiated tests.

Arturo Mediano received his M.Sc. (1990) and his Ph. D. (1997) in Electrical Engineering from University of Zaragoza (Spain), where he has held a teaching professorship in EMI/EMC/RF/SI from 1992. From 1990, he has been involved in R&D projects in EMI/EMC/SI/RF fields for communications, industry and scientific/medical applications with a solid experience in training, consultancy and troubleshooting for companies in Spain, USA, Switzerland, France, UK, Italy, Belgium, Germany and The Netherlands. He is the founder of The HF-Magic Lab®, a specialized laboratory for design, diagnostic, troubleshooting, and training in the EMI/EMC/SI and RF fields!, and from 2011, he is instructor for Besser Associates (CA, USA) offering public and on site courses in EMI/EMC/SI/RF subjects through the USA, especially in Silicon Valley/San Francisco Bay Area. He is Senior Member of the IEEE, active member from 1999 (now Chair) of the MTT-17 (HF/VHF/UHF) Technical Committee of the Microwave Theory and Techniques Society and member of the Electromagnetic Compatibility Society. Arturo can be reached at a.mediano @ieee.org. 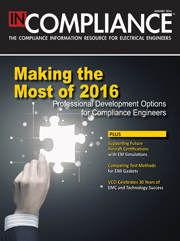