Since the introduction of International Organization for Standardization (ISO) standard 26262 [1], which is a functional safety standard for automotive electrical and/or electronic (E/E) systems in 2011, ISO 26262 has effectively mitigated two categories of failure. The first category is the prevention of systematic failures based on safety measures in verification and validation development processes. The second category is the prevention of safety issues that are caused by hardware failure using safety mechanisms. Those safety measures assure logical and quantitative solutions that are not achievable by traditional strategies of quality management (QM).

The architecture metrics provide average diagnostic coverages that are relative values [2]. On the other hand, the PMHF is an absolute value of the average failure rate of an item. Although some formulas are shown in Part 10 8.3.3 of [1], a detailed explanation of the PMHF is not provided [4].

Before we start the PMHF discussion, we focus on the definition of the probability of failure (PoF) and related equations shown in [5] as follows:

The PMHF can eventually be considered as an average failure rate of an item based on (2).

Although detailed methods regarding the calculation of a PMHF are not available in the literature, some papers focus on the PMHF metric ([3], [6], and [7]). The authors of [4] derive the PMHF using an expression of PoF based on a probability calculation tool, such as fault tree analysis (FTA). Although each PoF of the basic events can be calculated, we believe that the use of observable parameters, such as failure rates and diagnostic coverages (DCs), which are employed in Part 10 8.3.3 of [1], are more effective for improving the understanding of these parameters and creating an FTA model.

In [4], the authors discriminate between the following two cases with respect to the latent fault of a safety mechanism:

However, the discussion in [4] is not based on the conditional probability, as shown in [8]. Although the authors introduce the conditional probability in [8], the latent fault calculation has some issues, which are detailed in section V part B. The opposite situation regarding the mission function in the latent fault state is not referenced. This paper aims to clarify that the dual point failure (DPF) should be the failure caused by the second fault when the first fault is the latent fault, where the first element would be a mission function or a safety mechanism.

Figure 1 shows the target subsystem named “SUBS.” SUBS includes a mission function “M” and a safety mechanism “SM” that supervises M; SM is the primary safety mechanism.1 The notations M and SM are from Part 10 8.3.3 of [1]. Two secondary safety mechanisms2 exist for each M and SM: “SM2M” and “SM2SM.” Here, SM and SM2M can be the same element. We can observe three parameters, e.g., failure rate (λ), diagnostic coverage (𝐷𝐶), and diagnostic period (𝜏), for each element according to Part 10 8.1.7 of [1], as shown in Figure 1. With respect to the element M, let λ be 𝜆𝑀 and 𝐷𝐶 and 𝜏 be non-existent because the mission function does not have diagnostic capability. 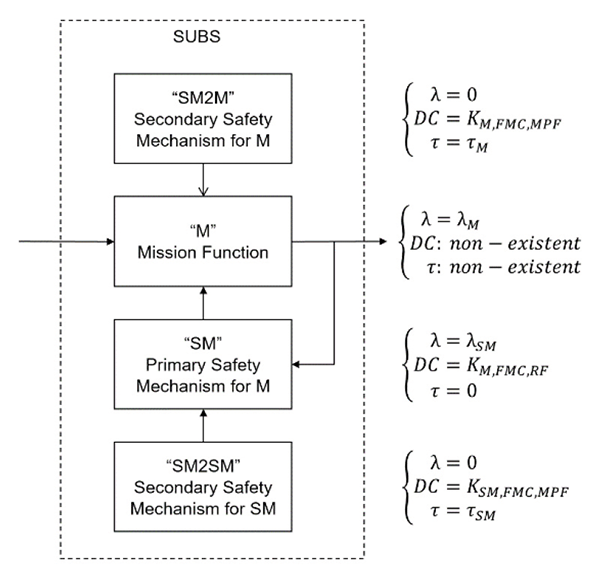 Before we begin to prove that the failure rate of a secondary safety mechanism is zero, we introduce the notation “A ⇒ B,” which indicates that element “B” receives a fault when element “A” is in a latent fault sate. The small dual-point PoF for SM ⇒ M in the period of (t, t + dt] can be defined as follows:

The first term in (4) assumes that faults occur for SM2SM, SM, and M, which are classified as safe faults according to [1]. As a result, we can calculate the PMHF, assuming that SM2SM is never in a fault state considering only the second term of (4). The same scenario is valid for SM2SM when M ⇒ SM; thus, we assume that both secondary safety mechanisms are never in fault states.

The PMHF shall be expressed as the sum of a single point failure (SPF) term and DPF terms because the failure that is caused by three or more faults is classified as a safe fault, as previously explained. Because the fault of a safety mechanism does not cause a violation of a safety goal by definition, we obtain 𝑃𝑜𝐹𝑆𝑃𝐹 based on the conditional probability as

Based on equation (7) in [8], the authors calculate the probability of a DPF caused by “Logic” when “Monitor” is in a fault state (𝑀𝑜𝑛𝑖𝑡𝑜𝑟 ⇒ 𝐿𝑜𝑔𝑖𝑐 according to our notation).

Here, we assume that the Monitor fault does not cause a dependent failure; the event {Monitor is in a fault at time 𝑡} and the event  {Logic gets a failure during time (𝑡, 𝑡 + 𝑑𝑡)} are independent. To use the notation as in the previous chapters, we rewrite Logic as M, Monitor as SM, and Subsystem as SUBS. We rewrite (7) as follows:

Then, the left-hand side of (8) can be rewritten as

The fault of SM must be a latent fault to cause the DPF; thus, the first term on the right-hand side of (8) (and (7) in [8]) should be written as Pr{SM is in a 𝑙𝑎𝑡𝑒𝑛𝑡 state fault at time 𝑡} as explained in (3). This term can consequently be expressed using the following conditional probability:

The second term on the right-hand side of (8) can be expressed as follows:

We consequently obtain the PMHF of SM⇒M by applying (14) to (2) as follows:

According to [4], we can classify the failure scenario based on the two categories shown in chapter III as a) and b). Equation 15 corresponds to case a), which should be rewritten as 𝑀𝑃𝑀𝐻𝐹,𝑆𝑀⇒𝑀,𝑙𝑎𝑡.

For case b), we assume a Markov process, i.e., that a fault of SM that is detected by SM2SM will be perfectly repaired (as good as new) and that the repair time will be ignored. Thus, we obtain (16) as

𝜆𝑆𝑀,𝑀𝑃𝐹,𝑑𝑒𝑡: the failure  rate of SM  with respect to the detected multi-point faults.

Therefore, combining (15) and (16) to consider both cases yields the following expression:

Although Part 10 8.3.3 of [1] provides and describes only the equation for SM ⇒ M, we are advised to multiply by two when we consider both cases, such as “SM ⇒ M” and “M ⇒ SM.” However, as this approach provides an un-exact result, we derive the exact result in the next section. 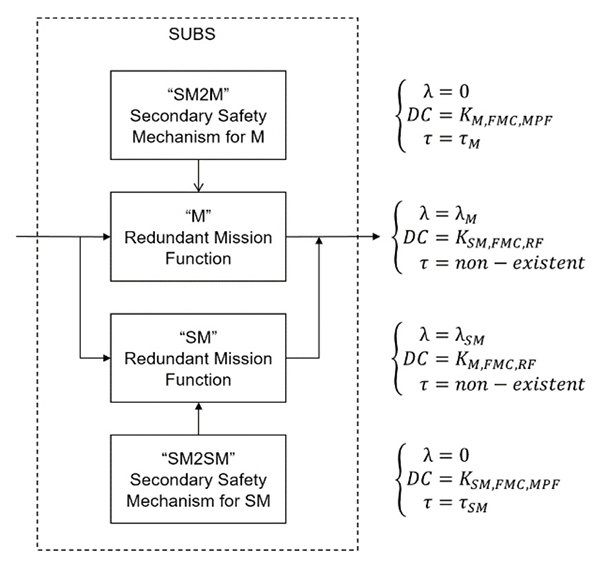 Considering the same argument in both cases, as in a) and b) in the section of this paper on “Related Work,” we can obtain the following expression:

Applying the PMHF Equation to Non-Redundant and Redundant Subsystems

Because an intrinsic redundant subsystem does not have a residual fault, we assume that 𝐾𝑀,𝐹𝑀𝐶,𝑑𝑒𝑡  = 0 and 𝐾𝑀,𝐹𝑀𝐶,𝑅𝐹  = 1 (100%). Applying these relationships to (21) generates the following expression:

In this study, we have presented generalized formulas for the calculation of PMHF in non-redundant and redundant subsystems using observable parameters, such as the failure rate of a mission function and a safety mechanism, the diagnostic coverages of the primary and secondary safety mechanisms and the diagnostic periods of the secondary safety mechanisms to expand the scope of the application according to ISO 26262. Because the PMHF of an item can be quantitatively calculated using FTA, we plan to prepare FTA models based on the methodology described in this paper.

Atsushi Sakurai is the Chief Executive Officer and Chief Technology Officer of FS-Micro Corporation. He can be reached at sakurai@fs-micro.com. 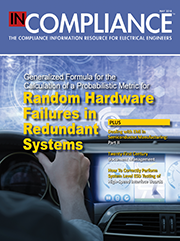