Radiated EMI From A Buck Converter

EMC radiated problems in HF/VHF ranges are typical in products with switching-mode power supplies (SMPS) as for example flyback and buck converters. Usually no high power is needed to radiate signals well over the legal EMC limits.

The topic for this month is related to the troubleshooting of an EMC radiated problem in VHF range from a low power product (tens of watts).

Figure 1 is radiated field versus CISPR limits as obtained in a semi anechoic chamber, with the product located 1.0 m above the ground plane, on wood table, and 3.0 m from the receiving antenna (horizontal polarization). 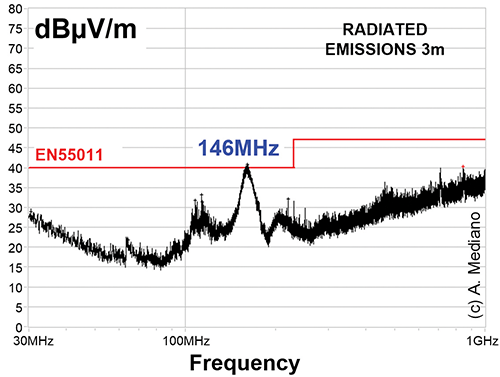 Fail to comply with regulations in the original system (green trace) was located at around 145 MHz. The antenna of the product was the mains power supply cable (movement of cable and a big toroidal ferrite was used to confirm that).

As usual (and recommended), next step in the project was to find the source of the EMI signal to find a low cost/size solution.

A near field probe was used around the parts of the equipment: two small PCBs (printed circuit boards), some cables, a small keypad, a display and a metallic box. The source of EMI was located around a LM25010SD device in one of the PCBs. This device is a 42V, 1.0A Step-Down Buck Switching Regulator from National Semiconductor (now Texas Instruments).

The converter was switching near 200 kHz so how could such a “low frequency” circuit be generating the VHF signal?

Buck converters are step-down DC-DC converters included in many consumer, computer and communication products because their simplicity and low cost. The buck converter is a switched-mode power supply (SMPS) using an inductor, a capacitor and a transistor and a diode switches storing energy in the inductor and discharging it into the load periodically as shown in Figure 2. 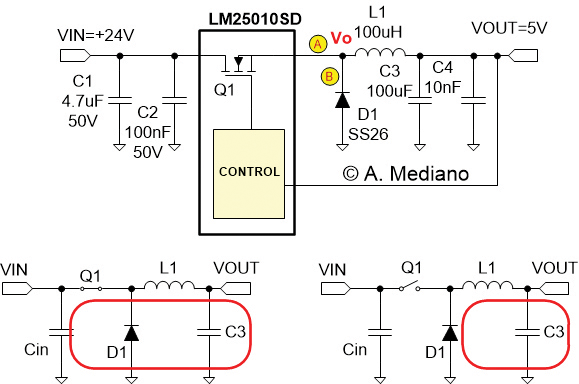 Figure 2: Buck converter schematic and operation with Q1 ON and OFF.

A complete description of this topology can be found in many books on the subject.

To understand the problem, the magnetic near field probe signal was used again and a very high activity was found on traces (A) and (B) in Figure 2.

A 1 GHz current probe was used as shown in photo from Figure 3a to visualize current through diode D1 on an Agilent DSO7104B (red trace).

As from the buck theoretical analysis, the current through diode was near triangular but a high speed transient was found at the time the diode was turned OFF.

A zoom was done of the current probe measurement finding a high frequency ringing (blue trace) at 146.2 MHz as shown in Figure 3b. The signal is compared with that from the near field probe on top of the converter (pink trace).

To add some damping to that resonant behavior from the diode recovery effect a small SMD ferrite bead was included in trace (A) in series with the output of LM25010SD (the MOSFET output).

The ringing on the current diode measurement disappeared and a new test at the semi anechoic chamber was done obtaining the black curve for the fixed system in Figure 4. 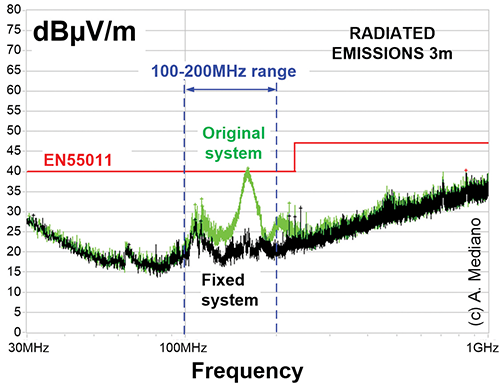 My final advice: when failing in EMC, try to locate the source from internal oscillators, under damped resonances, or parasitic oscillations. If you find the origin, solutions are more effective, cheap, and small. 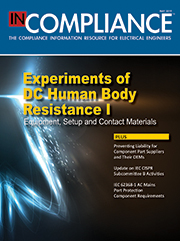