The reality: Effects from other systems can result in common-mode potentials that when measured at the LISNs appear to be propagated from the product power terminals.

Conducted EMI emission processes in power lines typically involve two characteristics of EMI: differential-mode and common-mode. Differential-mode currents emanating from power supplies in systems-products set up a line-to-line circulation of current. This current spectra then interacts with the series impedances of the LISNs, resulting in a differential-mode voltage spectra between the lines. Since the measurement of the conducted voltages (in dBuV) is typically single-ended to Earth reference, the differential-mode potential in the single-ended test is seen as one-half the value of the amplitude that is actually between the typical power pair.

To evaluate the propagation modes and separate the effects, use of current probes is effective. Differential-mode effects can be investigated by measuring the currents separately on each line of the power pair, then measuring the two together in the probe aperture. Differential levels will show some degree of cancellation for the combined pair, compared to the amplitudes on either wire. Common-mode circulations between the pair that circulates to the Earth safety wire will show approximately equal currents from the pair (combined in the probe) to the safety wire separately, and will suggest a phase cancellation when the safety wire is combined within the probe with the pair. Conducted circulations that are sourced from the interface can be evaluated by placing the probe around the interface cable(s) at the frequency (or spectra) of interest, then comparing this profile to that displayed on the whole of the power cable. When the interface source effect occurs, the solution to narrowband emissions on the power cable may be found in shielding or otherwise suppressing the common-mode currents in the interface rather than attempting to suppress the power entry (which may be futile, since that was not the source). 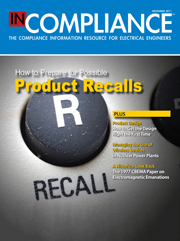