This document offers basic performance information pertaining to one specific type of microwave coaxial assembly which would typically be used in a test environment where occasional coiling/uncoiling and random movement would occur. Information contained within this piece is for reference purposes only and does not constitute a performance specification for any particular  microwave/RF cable assembly.

Testing was performed on a microwave/RF Test assembly, 50 feet in length, having the following specifications:

Stability testing was conducted using the following procedure as seen in Diagram 1. A full 2-port calibration of the network analyzer was performed using a stepped frequency range of 0.066 GHz to 26.5 GHz, 801 points. The cable assembly was coiled and uncoiled several times before being tested to simulate normal handling. Finally, the cable assembly was coiled with loops approximately 1 foot in diameter. The coiled cable assembly was connected to the network analyzer (3.5 mm socket to port 1, 3.5 mm pin to port 2) and s-parameter data was collected. This data set was labeled: “Initial Coil Data.”

Shielding effectiveness testing was accomplished through the use of Gore’s own mode stirred chamber. Tests were conducted from 1.0 to 18.0 GHz (1 GHz steps) in accordance with MIL-STD-1344A, method 3008. The noise floor of the test environment was verified before each test, as was instrument dynamic range. Efforts were made to keep the bulk of the test cable and its connectors within the working volume of the mode stirred chamber. 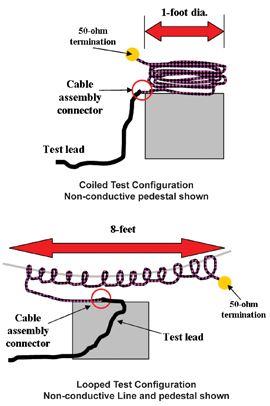 As a final test, the cable assembly was hung in loose loops over a nonconductive line strung within the mode stirred chamber. Test conditions were as stated above. Data was collected for tests with and without connectors wrapped in steel wool. 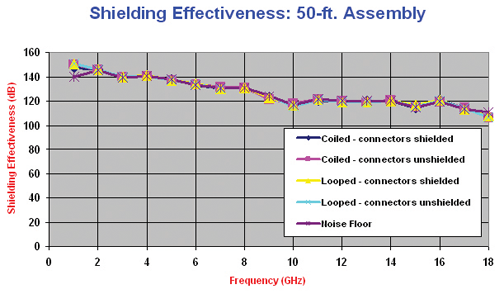 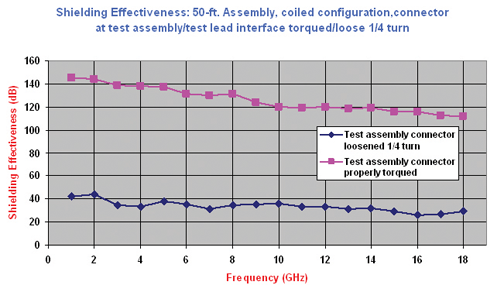 Phase Stability and Repeatability
Figure 1 illustrates the phase stability of the test assembly when going from a coiled state to an uncoiled state. It may also be noted that the behavior is essentially linear through 8 GHz. Choosing an arbitrary frequency of 10 GHz, the indicated phase change from an initially coiled state is -11.0 degrees. If one considers that a 10 GHz continuous wave signal will cycle through 219,546 degrees over a 50 foot cable, the 11.0 degree figure represents 0.005% of the assembly’s phase length.

A high-performance microwave cable assembly must possess excellent phase repeatability. Phase repeatability refers to an assembly’s ability to duplicate its original, or initial phase behavior when the cable has been flexed (or disturbed) then returned to its original, unflexed (or undisturbed) state. Figure 2 illustrates the phase repeatability of the cable assembly. Providing a practical example will highlight the importance of repeatability. The 50 foot test assembly is uncoiled and connected to its respective instrumentation. The necessary calibration procedures are followed and phase is noted at 10 GHz, after which the assembly is disconnected, coiled, and stored for future use. A short time later the cable assembly is uncoiled and reconnected to this same instrumentation and phase is noted. Referring to Figure 2, the user can expect to observe a change in phase of approximately 0.400 degrees at 10 GHz (20 degrees Celsius ambient temperature).

Figure 4 illustrates the test assembly’s loss repeatability. Changes in loss from the initial coiled state vary no greater than 0.030 dB from 0.066 GHz through 18 GHz. The practical example provided for phase repeatability can be applied to loss repeatability as well; one may expect a change in loss of approximately -0.010 dB at 10 GHz (20 degrees Celsius ambient temperature).

Shielding Effectiveness
Shielding Effectiveness (S.E.) was the only area where a standardized test procedure was used (see Diagram 2 for details). Referring to Figure 5 the S.E. performance of the test assembly is recorded for several different configurations. In all configurations, the S.E. values of test assembly were consistently at or approaching those of the chamber noise floor.

Performance through 18 GHz was notable, producing in excess of 100 dB of shielding effectiveness. Figure 6 was provided to demonstrate that data supplied in Figure 5 was merely not a measurement of the chamber ambient noise level. Figure 6 displays the contrast in S.E. behavior when one connector, at the test assembly/test lead interface, is properly torqued versus loosened by one-quarter of a turn. 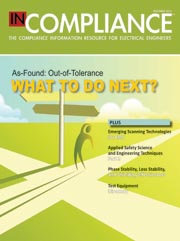