On Sorghum, Poisson Clumping and Meatloaf

This month’s Reality Engineering takes a stab at circumstance. As engineers we are creatures of prediction and expected outcomes. Sometimes things happen that occur outside the norm.

What’s in a Grain?

Consider the humble sorghum plant, a grass that has been cultivated since our species has been cultivating plants for food. According to the National Grains Council, it is the “Grain of the Month” during June, when it is planted. It yields a great many products: it can be ground for flour, popped like popcorn and made into alcohol. It “is known under a great many names: milo, guinea corn in West Africa, kafir corn in South Africa, dura in Sudan, jowar in India and kaoliang in China.”1 It is with the latter concoction I am all too-familiar: a clear mostly-ethyl liquid, a lubricant that has oiled many an interesting discourse2 (and many perhaps not-so-enthralling).

On the Eastern Shore of Maryland, fields of mature sorghum lie drying in the sun in late autumn, harvested not long after the corn is taken in and used for livestock feed. The dried fields are a rich dark brown and this urban monkey is intrigued by the shape of the mature plants. Now this species of plant has been around since the Egyptian times and, most notably within the last hundred years or so, has been largely homogenized, genetically, and one wouldn’t think that there would be many variations in the thousands of plants in a typical field, but every so often an individual pokes its grainy head above the crowd.

Last year’s crop of sorghum made me think about the characteristic of outlying events, yogurt, something called Poisson Clumping and the chaos of my childhood dinners.

In “The Violinist’s Thumb” author Sam Kean explores the variations caused by minute adjustments in the code that instructs our bodies to grow ten fingers, taste buds, internal organs and various protuberances that give us functionality. DNA’s the thing, of course, the kinked stuff that programs our instincts, preferences, motivations, intelligence and quirks is now routinely decoded and sequenced. Inside each cell of our bodies is about two meters of the double-helix compound that is composed of just four different bases: adenine (A), thymine (T), cytosine (C) and guanine (G). These nitrogen compounds, A only pairs with T and C only pairs with G, are arranged with sufficient variability to describe (nearly) all the living organisms in the world. We have “enough DNA in our bodies to stretch roughly to Pluto and back.”

Kean describes the evolution of the discovery and exploration of the genetic code, starting with Mendel and his peas, moving on to Darwin, fruit flies, Watson & Crick and the recent Human Genome Project known as “The Manhattan Project of biology” (p. 294). The quest to understand the structure of ourselves and our relationship with the natural world is a fascinating read, all the more entertaining when the various characters—caustic, humorous, hubristic and others—are thrown in. He considers the art of Henri Toulouse-Lautrec (physically stunted by inbreeding: his two grandmothers were sisters), the penchant for collecting cats (world-record at 689) and the physical ordinariness of Einstein’s extraordinary brain, which was sliced into 240 blobs and sent around to neurologists for study. Spoiler: they didn’t find anything remarkable.

Speaking of famous peoples’ parts, other celebrities, notables and the infamous have also been purloined post-mortem. Baseball great Ted Williams’ head is frozen at a cryogenic facility in Scottsdale, AZ, awaiting re-animation (never mind that the body is iced separately). Lenin’s brain was studied to see what makes a revolutionary tick.

Finally, Emperor of France Napoleon’s “bony-part” was lopped off during his autopsy by a “spiteful doctor. It was last seen in New York, auctioned to a urologist in 1927 and allegedly resides in New Jersey (figures).

Millions of Lines of Code

Anyway, putting the sordid stuff aside, the book informs on the infinite combinations of ATGC, the marvelous micro-mechanics of its behavior and replication. And, how much DNA in common we have with, say primates.

The DNA of chimps and humans has been studied intensely for the past thirty years, looking for clues why we have developed speech, sophisticated tools, religion, poetry and modes of mass murder. Apparently there are very minor sequences (once thought to be ‘junk DNA’) that humans have exclusively that affect the size of our brains and, by inference, development.

Small variations in the genetic code can cause enormous impact on an individual that carries the coding, such as persons carrying an extra copy of chromosome 21, which triggers Downs syndrome. The title of Kean’s DNA opus refers to a 19th C violinist virtuoso named Niccolò Paganini, whose genetic coding left him with something called Ehlres-Danos syndrome, which leaves the sufferer bereft of collagen, which otherwise stiffens joints. This ailment imbues tremendous flexibility—and hence Paganini’s amazing flurries on the violin—but eventually causes crippling disability. “Paganini’s physical talents and physical tortures had the same genetic source.” Alas, DNA giveth and DNA taketh away. At the end of his life he was ‘treated’ with mercury-based purgative drugs, which eventually hastened his death.

Outstanding in the Field

Variations across individual humans is easy to grasp; mother and father contribute half of the chromosome pairs and most co-joining acts are the result of willing participation by at least one of the partners. However, when it comes to sorghum, I would have fancied that the pairing of gametes would be largely incestuous, so it would seem that after millions of iterations of sorghum seed reproduction, all the variability would be worked out. The occasion of individuals poking out from the crowd would be normalized out: every individual plant would be a duplicate of the other. This is obviously (not yet) the case as the tall fellas in the picture obviously stand out above the norm; they must be, even minutely, different at the gene level from their companions. It speaks, I suppose, to the infinite variability possible by just a few tweaks to sorghum genes. 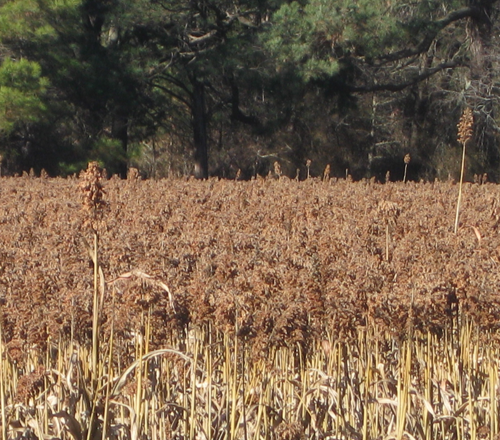 What got me started on this decidedly random topic and peaked my fascination is why certain coincidences occur. Why does “everything happen at once” sometimes? An example that I am certain has happened to you: You’re asked by your spouse or other to run to the grocery store because “we’re out of fat-free Greek yogurt.” You reply: “Can it wait? It’s ten o’clock at night.” The return look answers the question. So, complying, as you do, you throw on your dirty sweatshirt and slippers, head down to the local Safeway and pad down the deserted aisles to the dairy section.

Who shops at 10 p.m. on a Sunday night? You round the corner and there, standing and staring at the shelf of Greek yogurts are the only other three customers in the store. Substitute yogurt for lima beans or the grocery store for the gas station. I began to wonder why this happens. What is the critical mass of coincidence, timing and happenstance that cause these convergences? The recent spate of lost-plane incidents in Indonesia seems to follow some collective arc.

The ‘answer’ or at least a description is found in something called Poisson Clumping, named for 19th century French mathematician Siméon Denis Poisson, he of distribution fame.  PC is a statistical construct that addresses why, sometimes, ‘everything happens at once,’ alternatively why “chances of a big clump are more than you would think.”3 Poisson Clumping speaks to the notion that our universe is not homogenous, either in time or space, and that events tend to accumulate around a common timing. Clumping happens in nature and in man-made systems.

Like just today, I was walking along on a snowy street. People shoveling driveways, no cars anywhere and a single narrow plowed lane on a suburban street. I had been out about 30 minutes and encountered maybe two or three autos pushing through the mush and slush of the deserted streets. When, all of a sudden, a car is right behind me and another coming towards me. We intersected perfectly at the same time, same space. Poisson Clumping.

Poisson Clumping has been examined to look at patterns of testosterone excretion and aging in males4 it has been observed in data communications networks, when traffic tends to clump in certain times at certain parts of the network, unpredictably. We engineers like to have steady, forseeeable outcomes, however events don’t necessarily follow smooth deterministic patterns and confident predictions can go askew.

There is no such thing as absolutism, that is why a Poisson Clumping Heuristic is often invoked when looking at events that can’t be explained otherwise, heuristic meaning rule of thumb, educated guess or taking a stab: Perfect reasoning for EMC engineers.

Which brings me to meatloaf.

Raised in a household with six siblings, a pair of warring cats (an orange brutish tabby and a skittish female calico), the occasional mutt and the clumping of pounding transients and friends there was, as they say, never a dull moment. Dinners were particular and predictable occasions of chaos. My dad, being old school, made 6 p.m. mandatory assembly hour. Jostling and jockeying for position around classic American fare (meatloaf—always meatloaf, peas, instant potatoes whipped to the consistency of baby food and slices of Wonder bread) my sibs were rarely late for dinner and usually fought over the end-position (closer to return to the TV room). I learned, early-on, to sit in the middle of the table, the probability being high that the dishes would pass by me at least once, critical in a family of nine.

My older sister would usually need to be called, again, she being a teenager and connected to her social fabric via a copper umbilical. In those days (pre-1982) Ma Bell charged dearly for extra extensions, so in order to get some privacy she had a twenty-foot coiled cord that ran from the kitchen, down the hall to behind a closed bedroom door, giving a rare bit of phone intimacy in a full house. Dad would send one of us to fetch her. One way to get her attention, and raise a little ire—I never pretended to be a perfect brother—would be to twang a few bass notes on the extended cord. “I’m cominnnnng!” and she would shortly emerge, in a huff and join us at the table.

The meal would begin in earnest after grace “Bless us oh Lord…” A few nanoseconds after “amen” my brothers would resume a pre-dinner argument over space, elbows deployed, my long-suffering mom would try to settle things out “Boys, please!” My dad’s fist would pound on the table, rattling plates and bowls, my brother spilling his milk down the table at my mom’s lap.

Then the phone would ring, my sister would jump up from the table and my dad would shake his head and mutter: “For crying out loud. Why does everything happen at once?” I don’t know, Pop, it just does.

Outliers are everywhere. Intricacies of DNA can explain tall sorghum, Poisson Clumping can explain groupings of events, and my loathing for meatloaf can be traced back to chaotic dinners and spilled milk. 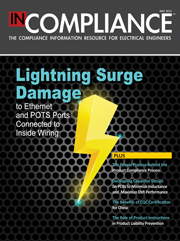