Does packaging integrity make a difference?

During periodic verification and maintenance of ionizers offsite, offset voltage in excess of end user specifications has been found. It should be noted that the ionizer emitter points were clean and the units fully operational. One common denominator is that the ionizers incorporate a balance adjustment feature (trimmer potentiometer or “trimpot” used to adjust positive and negative ion output (see Figure 1). A trimpot allows one to bring the unit into balance for compliance with ANSI/ESD S20.20-2014 by use of the test methods and procedures for evaluating and selecting air ionization detailed in ANSI/ESD S3.1-2006. A 20pF 6” x 6” charge plate was employed to adjust and verify offset voltage performance to <+/-5.0 volts for four ionizers. Temperature, humidity and airflow in combination with emitter tip performance can affect ionization performance. During transport, could trimpot drift cause ionizers to go out of balance due to its packaging? Is the ionizer end user utilizing original OEM packaging, or is the shipper or vendor using stock boxes not specifically designed for instrument transport? 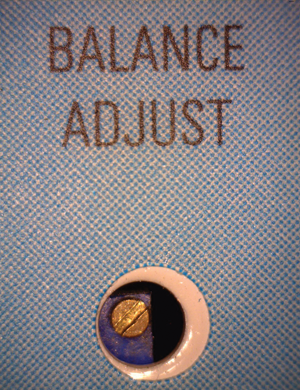 Due to the effects of shock and vibration, is it better for ionization calibration or adjustments to take place off-site or in-house? Is proper transport packaging in place for offsite calibration to minimize shock and vibration? To answer these questions, four ionizers utilized by companies in the disk drive industry were evaluated and adjusted per ANSI/ESD S3.1 at both the RMV Laboratory (hereinafter referred to as Moffett Field) and Space Science Laboratories (SSL), at the University of California, Berkeley. The testing sequence is outlined in Table 1.

Initially, the four ionizers under test were adjusted (calibrated) at Moffett Field by an operator wearing an ANSI/ESD S1.1-2013 compliant wrist strap before testing and transport to SSL for a second series of ANSI/ESD STM3.1 analysis (1.0). Emitter points were found to be in excellent condition. Each ionizer was balanced within +/-5.0 volts. Two ionizers were transported from Moffett Field (RMV 1 & RMV2) to SSL (Asset 5079 and 5083), a distance of 49.2 miles each way, in total, four ionizers were transported via auto to SSL for evaluation (2.0).

Later all units were returned by auto to Moffett Field (3.0) for testing. Afterwards, ionizer were driven back and forth to Moffett Field by truck and benchmarked (4.0). After a second round of calibration took place (5.0), at Moffett Field, the ionizers were transported via truck (6.0) using an ESD blue corrugated container with polyurethane cushioning foam on bottom of the box (Figure 2) and measured.

Before transport to SSL, the four ionizers were placed into a Kraft regular slotted container (RSC), rated at 200 pounds per square inch (PSI) bursting strength and C-Flute without cushioning foam or end caps (Figure 2, right). Off-site ionizer transport should require specialized packaging to protect the product from shock and vibration. More often than not, ionizers can be shipped via local transport such as a van or small truck that does not incorporate cushioned packaging designed to minimize shock and vibration. However, repuTable ionizer OEMs employ packaging that provides specialized cushioning (such as foam in place or die-cut foam). Insure that the vendor or shipping company is utilizing cushioned packaging for ionizer transport.

In order to minimize shock and vibration, a packaging engineer certified by the Institute of Packaging Professionals (IoPP) or the National Institute of Packaging, Handling & Logistics Engineers (NIPHLE) would design a transport package to minimize shock and vibration by designing a package that incorporates cushioning and/or other countermeasures such as an impact indicator. 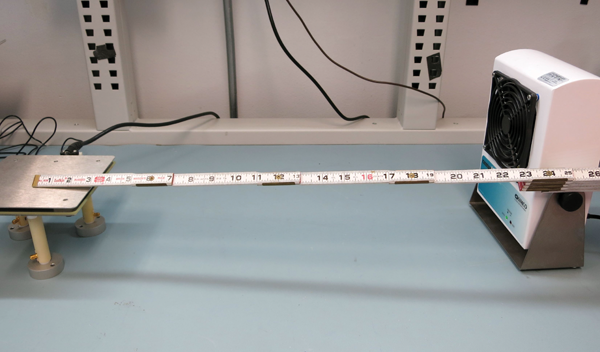 Once again, a 6 x 6” 20pF charge plate was positioned to test for offset voltage and electrostatic decay from +/-1kV to a cutoff of +/-100 volts. Each ionizer was initially adjusted and balanced to <+/-5.0 volts at Moffett Field before being transported to SSL and then back to Moffett Field. The greater shock and vibration experienced in a transport truck compared to a cushioned ride (automobile) could be the cause of trimpot drift or off-balance. However, some disk drive companies mandate offset voltage requirement (limits) of <+/-5.0 volts or <+/-3.0 volts or lower. Therefore, the peak offset voltage for SSL 5083 measured -1.9 volts (see Figure 3b, left) after rebalancing at Moffett Field. This unit was transported from Moffett Field to SSL and then back to Moffett Field for a peak offset voltage of -13.9 volts (see Figure 3b, right), indicating that trimpot drift during transport appeared to have taken place.

In contrast to using a Kraft, RSC, the offset voltage peak was less from -3.0 volts after calibration to 3.6 volts peak when the ionizer was transported in a blue ESD safe cushioned box.

Table 8 shows a comparison of one of the SSL ionizers (5083) from initial calibration (peak offset of -1.9 volts) and shipment to SSL via truck with a -12.8 peak offset voltage. After the second series of calibration at Moffett Field (-3.0 volts, peak), the ionizer did not exhibit as great a variance following shipment n a blue cushioned package compared with shipment in a Kraft RSC.

Consequently, there appears to be little risk of trimpot adjustment from shock and vibration from shipment either when ionization calibration is conducted on-site, or a suitable packaging engineering approach is practiced.

Using an ESD blue banker box design (roll over sides & dividers and top to bottom antistatic polyurethane foam) for ionizer protection against shock and vibration on a truck minimizes offset voltage peaks. Conversely, a Kraft RSC offered less protection from shock and vibration (ionizers can bump up against other ionizers during transport). If one utilizes ultrasensitive ESD devices, offset voltage limits of <+/-10 volts can be required; trimpot drift should be considered for ionizer transport off-site. This initial study could be expanded with shipment by use of a tri-axial data logger for dynamic shock monitoring recording during shipment. 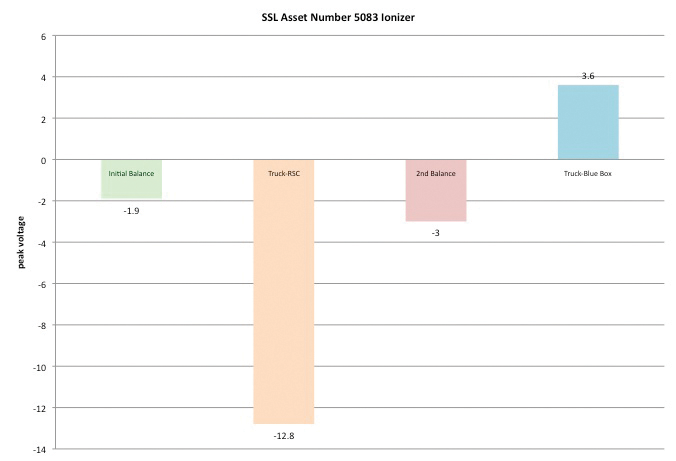 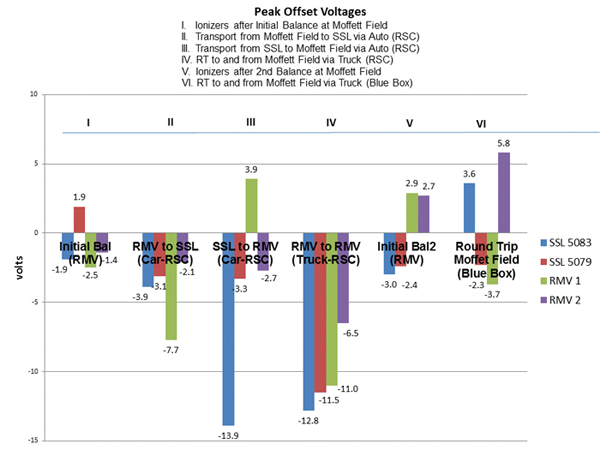 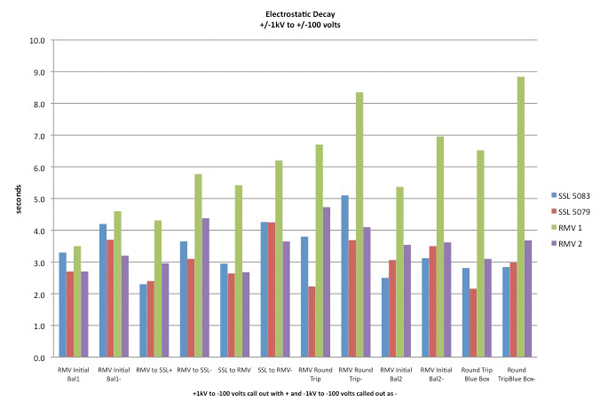 Jorg Fischer, MBA, is the Director of Safety and Mission Assurance at the Space Sciences Laboratory at the University of California, Berkeley. He has worked on various NASA flight and spaceflight programs spanning balloons, rockets, satellite instruments, and satellites. 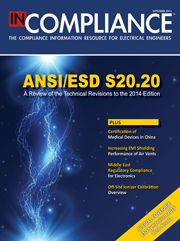