Off In Space: A Visit to NASA Glenn and Plum Brook Test Facilities

The next couple of installments of Reality Engineering will carry a spacey theme, in recognition of the ongoing efforts of rocket scientists and engineers in our community. Testing and verification of space-borne systems are critically important, you don’t get “do-overs” in space shots (we found that out in an earlier post “The Ringing Rocket”). Here we visit some NASA facilities that proved out Apollo-era designs and are being maintained for the next phase of space engineering.

When I was a chubby lad back in the 1960s, one of my favorite things to spend my allowance on was something called Space Food Sticks®: “Good nutrition and lasting energy in a chewy tasty snack.” You see, these exotic neo-candy bars were allegedly developed for the astronauts. They must have had some kind of magic if they were the ambrosia of space pioneers and we Air Force brats coveted them wildly. (You can find out information about the Space Food Sticks Preservation Society at www.spacefoodsticks.com, by the way). The other fond food memory of the space age was Tang®, which was apparently used on Gemini flights to mask the foul taste of some of the drinking water that was consumed on-board. Both of these nutritious items can still found on Earth, but it’s been a while since I’ve sought them out.

The allure of space travel: the Apollo program, heroes in space helmets, artificial food products–all captured my boyhood imagination. All the aging nerds of my vintage know the LEM from the Command Module and marveled at the Earth-shaking thrust of the Saturn V launch vehicle. Audacious! So it is against the backdrop of these fine memories we toured the Glenn Research Center facilities a bit ago, not far from Cleveland (“The Forest City”).

NASA spending during the 1960s peaked in 1966 and during the expansion of the space program (Apollo spending was north of 60% of the budget). All that funding fueled the expansion of several laboratories in our industry as well as the construction of almost bigger than life facilities under the aegis of the US Government, featured in this month’s Reality Engineering. If one takes the long view that the human race might be around for another few millennia, it’s worth keeping the pressure and funding for the noble objectives of advancing our understanding of Earth and our place in the universe. And it can all be done with less than 10% of a round of a tottering bank’s bailout.

The moon hasn’t gotten any closer since our last visit in 1972 and at a quarter of a million miles away, it will require a new heavy lift vehicle to bring cargo and astronauts to the surface, and back.

The Space Shuttle, sadly mothballed/museum’d, has left the field to a few commercial competitors, but we really need something that will do some heavy lifting and achieve “ΔV,” the escape velocity necessary to kiss off Earth’s grip. What, hence, is serving as our ride to the exo-atmosphere? Russian Soyuz Rockets! Hmm. While it’s nice that we are cozy enough to ask our “friends” (a relationship that is pretty shaky at the moment) for a ride now and then, it’s a little bit like putting your eggs AND your hen in one basket. Hence, we need new kind of launch vehicle.

Enter the Space Launch System or SLS, a mighty beast scheduled for first flight in 2018. (SLS has superseded another design, called Ares, since cancelled.) SLS will be the largest launch vehicle ever put into space and built using many of the shuttle concepts and components, including Solid Rocket Boosters for launch and first-stage ignition and the mighty RS-25 rocket engines. The 384 foot tall (eighty feet taller than the Statue of Liberty on her pedestal) launch vehicle will weigh 6.5 million pounds and carry a max payload of almost 300,000 pounds. The primary payload for the SLS will be the Orion Multi-Purpose Crew Vehicle (MPCV).

There are a couple of drivers for SLS, not solely the jones to plant our feet on the dusty lunar surface (and Mars), but includes advancing the goals to support the National Space Policy Directive, namely, to replace the Space Shuttle and to complete the International Space Station. Also needed: advancing the state-of-the-art. As with many of my fellow boomers, the Apollo and other programs inspired an interest in technology and science. The aims of STEM programs (Science, Technology, Engineering and Math) are very much the same. What better way to get some kid’s attention than with a Richter-registering 9 million pounds of thrust?

And, with the changes afoot in the world order—China’s successes in space for example and the uncertainty in the underbelly of Russia—there is no small need to keep our edge keen.

We not long ago paid a visit to the NASA Glenn Research Center and Plum Brook Test Facility and got the cook’s tour of the Apollo-era facilities. Impressive is such an under-powered word to use to describe the mechanical and electrical achievements at these two locations. 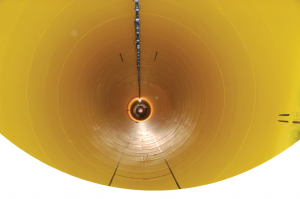 First stop was a 500+’ deep hole used to perform experiments in the “Zero G Facility.” It is about as deep as the Washington Monument is high.

The facility drops specialized pods with science experiments down the hole. The entire apparatus is in free-fall in a vacuum and, as a result, simulates near-zero gravity.

For a free falling five seconds, the experiment records the effects of the microgravity. Various phenomena have been observed and the result has been to modify the mechanics of spacecraft systems engineering, particularly when it comes to fluids behavior in microgravity. This is critical to understand because (non-solid) propellants are composed of liquids that need to mix nicely in order to burn and provide thrust. Seems that, in zero Gs, propellants tend to separate into their component parts and gloop together in the propellant tank. If the fluids aren’t mixed and available at the nozzle in the right proportion, then the engine won’t start, may quit or will burn poorly. Given that there is not a way to get back down to Earth to re-fuel, the efficient and proper operation of the rockets is paramount. These effects were observed in the micro-gravity chamber when it was built in the 60s and, as a result, there are several designs that now are utilized to mitigate this (baffles and such).

Next on the tour was the truly awesome Space Power Facility at Plum Brook Station, an hour down the road from Cleveland. Personnel from the facility provided a walking, driving and talking narrative of the Plum Brook facility, originally built as a TNT development and test facility during WWII.

It is no exaggeration to say that there is nothing like the Space Power Facility in the world. The 125’ tall chamber simulates deeeeeep space by evacuating all the air, heating and cooling the area to simulate the ‘dark side’ of the Moon and high noon on orbit. The thermal vacuum chamber is sealed by a large “pocket door.” In the photo on page 16, the white structure in the middle is the door that slides shut and latches for an airtight fit. The door weighs 5 million pounds, about the same as 11.2 million Big Macs. 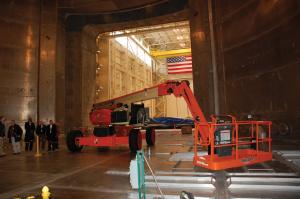 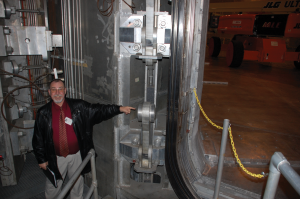 The upper stage of the rocket will be set in the chamber and subjected to not only environmental extremes, but will also be tested for EMC and radio frequency characteristics. The chamber is constructed of a double-walled configuration with an inner aluminum shell and an outer concrete shell. The space is evacuated by sets of enormous pumps that can hold negative pressure (near-vacuum) for the duration of the testing.

The picture to the below shows a test of a Delta IV shroud (basically the upper stage of the rocket).

The final piece of our tour was a massive project to upgrade a vibration test stand that has a concrete pour (inertial mass—think huge anchor) the size of a couple of tennis courts. The shaker arrangement will subject the launch vehicle to the stresses encountered during liftoff and ascent. The concrete will keep it from shaking loose. 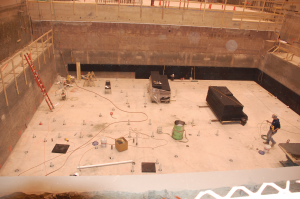 After viewing the marvels of the 60s we are humbled by the great efforts of the space pioneers. It truly was a time of soaring aspirations and the inventive spirit. We are also encouraged that some real attention is being paid to keeping the R&D testing capability alive and in service, ready for the next generation of space dreamers.

Mike Violette is President of Washington Labs and Director of American Certification Body. The next installment of RE stays with the space theme, but leaps forward, sort-of, by returning back to the 1960s. He can be reached at mikev@wll.com. 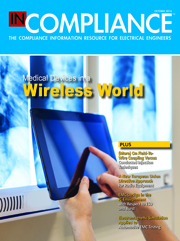